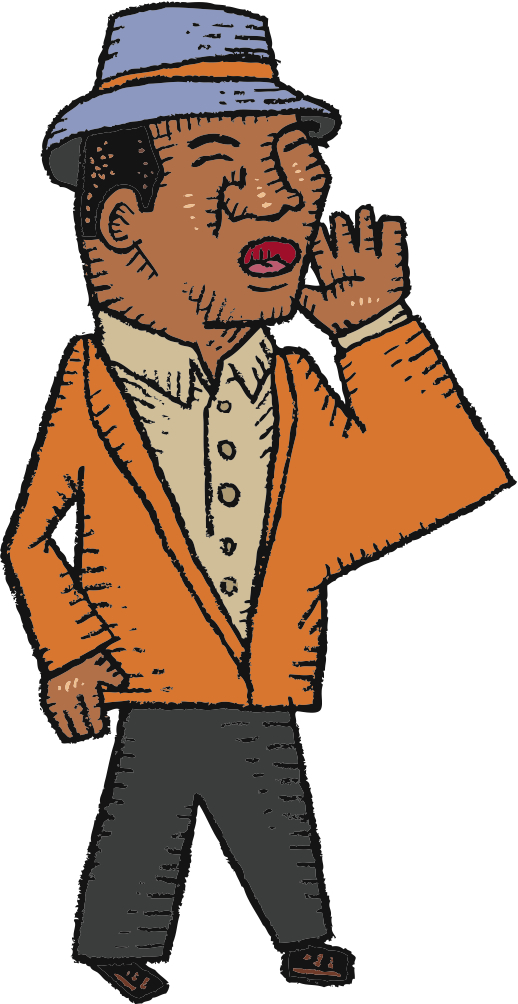 ARI In the ten years or so I’ve known you, you’ve always been pretty excited about food and history, but you seem particularly pumped up about doing this dinner with the food of the African American street vendors. It’s not a subject very many people think about very often. What got you going on it?

ADRIAN Well, it’s another wonderful subject that sprang up while I was doing my soul food research. I think the street vendor stories are very compelling. Here, you have examples of entrepreneurs eking out a living in very tough circumstances. Yet, they do it with such flair. Given the their distinctive calls to sell their wares and the vibrant outfits they often wore, I think you had to be a real character in order to be successful.

ARI How did the whole culture of street vendors get going?

ADRIAN That’s a tough one to answer. Anywhere there was a market, sellers have often figured out ways to get their product noticed more than the competition. It appears that street vendors were those who were too poor to own, rent or operate a market stall, so they took their show on the road. The street vendor who existed in colonial America operated in ways that resembled European street vendors the most.

ARI What were some of the biggest surprises?

ARI What are some of your favorite dishes?

ADRIAN I have to go with the desserts only because I have yet to eat a really good pepperpot. New Orleans takes the prize with pralines and calas (rice beignets)!

ARI What about the vendor calls?

ADRIAN Many of these calls were very creative. So much so that the calls used to draw as much attention from music lovers and scholars as the blues and spirituals. Again, the entire point was to draw attention to your product, through imagery and humor, so that you got the money and the other vendor didn’t.

ARI Are you going to teach us any of them at the dinner?

ADRIAN Most definitely! I’ve got several vendor calls and the sheet music. I’m planning to sing the calls of the particular foods as they get served. We’ll learn two things: how appetizing a rhyme can be, and why I never tried out for American Idol!

ARI When you were here last year for the African American dinner at the Roadhouse I know you spent a little time at the Longone Center in the Clements Library doing research. Did you pick anything up on this subject?

ADRIAN I had an interesting time rummaging through the archives. I didn’t find anything that I would call new information, but I found quite a bit to substantiate the research I had done to date. Another highlight was meeting Jan Longone (before she retired) and the very capable staff at the library.

ARI Other thoughts or insights?

ADRIAN Another interesting part of the story is how slave owners would let their less productive slaves become vendors. These were usually the older slaves. Depending upon the master’s temperament, these vendors were allowed to keep some of the proceeds and purchase goods, and sometimes their own freedom.

ARI Excited to be coming back to Ann Arbor?
ADRIAN Absolutely! I had a great time there last year. Those who attended the dinner were a lot of fun and they showed me much love. Who wouldn’t want to come back to that?