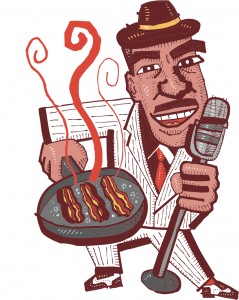 My Conversation with Andre

While he’s hardly world famous, Andre Williams is definitely one of those one of a kind creative folks who make their mark.  He was basically doing rap before there was rap. And he stuck his neck out by writing and recording racy songs like “Bacon Fat,” “Greasy Chicken” and “Jail Bait” back when American society wasn’t used to watching pseudo-near-sex on network television.  And since he’s 75, it’s all the more special that we get the chance to have him here, live at the Roadhouse.  Andre will be up here in person in a couple weeks to kick off Camp Bacon by playing live at the Roadhouse Friday night June 18.  Anyways, I’m sure he’ll have more to say (and sing) when he’s here, but below are a few quick notes from my conversation with Andre.

Ari:  Well, for this audience, Bacon Fat is the obvious connection.  What’s the story behind the song?

Andre:  “What happened was, when I was young, I just started venturing off into this entertainment thing that I’m still into. And one of the boys in my group, lived in Memphis, and he got the group invited to audition for the Flamingo Lounge.  That was where all the black entertainers were auditioned.  We were the opening act for a blues singer.

While we were driving down there in the car, I had this ham and bacon sandwich and we saw some cotton pickers and at the time we were maybe a hundred miles out from Memphis. And then meetin’ a disc jockey down there and he got us an audition down there and that got us going with the song.”

Ari:  Well, that’s pretty much the story in the song!  What happened then?

Andre: “When I brought the idea back to Detroit. Miss (Devora) Brown (owner of Fortune Records) didn’t like the idea at all, this talkin’ stuff . . .  She said ‘Records are for singin’’.  And she said ‘Stories are stories.”  But it just happened that Ernie Dunn who was the #1 night time DJ in Detroit back then was in the studio with Miss Brown and he heard me talking about “Bacon Fat,” and he told Miss Brown, ‘If you can record it, I’ll play it!’  At that time unless you were payin’ big payola you never got on the radio, so when he said that  . .. . that was all she needed to hear.”
We recorded the song about 30 times.  You record it, and then keep recordin’, keep recordin’, keep recordin’ til we got it.  We did in 1956 goin’ into 1957.  It’s right around my birthday.  In the fall my birthday is November 1.

Andre: “So we’re both Scorpions.” (he laughs out loud)  “Yep.  All of these things happen to us Scorpios but we manage to scathe through it.

Ari:  Where did you grow up?

Andre:  I’m from Alabama.  That was the 1930s and 40s.  Down there then all there was food and work, and country and western songs.  That was the music I grew up on.  I wasn’t even aware of rhythm and blues . . . my grandparents were sharecroppers and all we heard was the music coming from the guy who owned the plantation coming out of his radio listening to this music and that’s the music we cut our teeth on.  (Check out Andre’s country and western album, “Red Dirt,” recorded with the Sadies)

And then I went from there to Chicago. Right now I’m at 71st and Exchange on the South Side.

Ari: “When I was little we lived at 71st and Crandon (a little bit east of where Andre lives now).

Ari:  I can relate to that.

← Previous: The Spotlight is on Bacon Next: Bacon Fat & Other Songs by Andre Williams →