The History of the Po’Boy 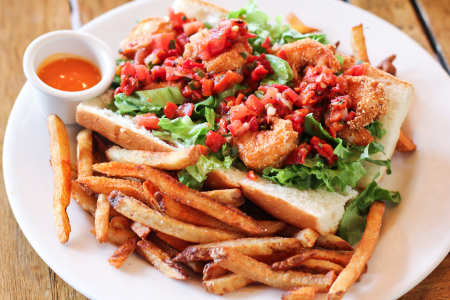 If you’re from New Orleans, you might feel immediately at home coming inside the Roadhouse and ordering a really great po’boy sandwich. If you’re not from that fabled city than you might not even be familiar with this Louisiana favorite at all. The po’boy has a history as rich and multi-cultural as jazz music, and after eating one you’ll feel as content as if Mr. Louis Armstrong himself was crooning in your ear.

It reportedly all began in 1929 during the transit strike in New Orleans. Many people that lived in the city were sympathetic to the union workers who were striking. These workers couldn’t leave the picket lines in order to eat, and since they were currently unemployed, they also had no money. Bennie and Clovis Martin, the owners of the Martin Brother’s Coffee Stand and Restaurant, were former streetcar operators and members of the employee’s union and were among those who sided with the union members. They got a local Italian baker to make 40-inch long, evenly rectangular loaves for them so there would be less bread waste. Then they filled these with fried potatoes and brought them to the men on the picket lines. They fed these sandwiches to the “poor boys” on the picket lines at no charge until the strike was over. The strike may have ended, but the sandwich, and its name, stuck.

Here at the Roadhouse, we take a great loaf of soft french bread from our Bakehouse, load it full of crispy fried shrimp or catfish and pile it high with shredded lettuce and absolutely delicious tomato relish. We know you’ll enjoy it whether you’re from New Orleans or just around the corner!