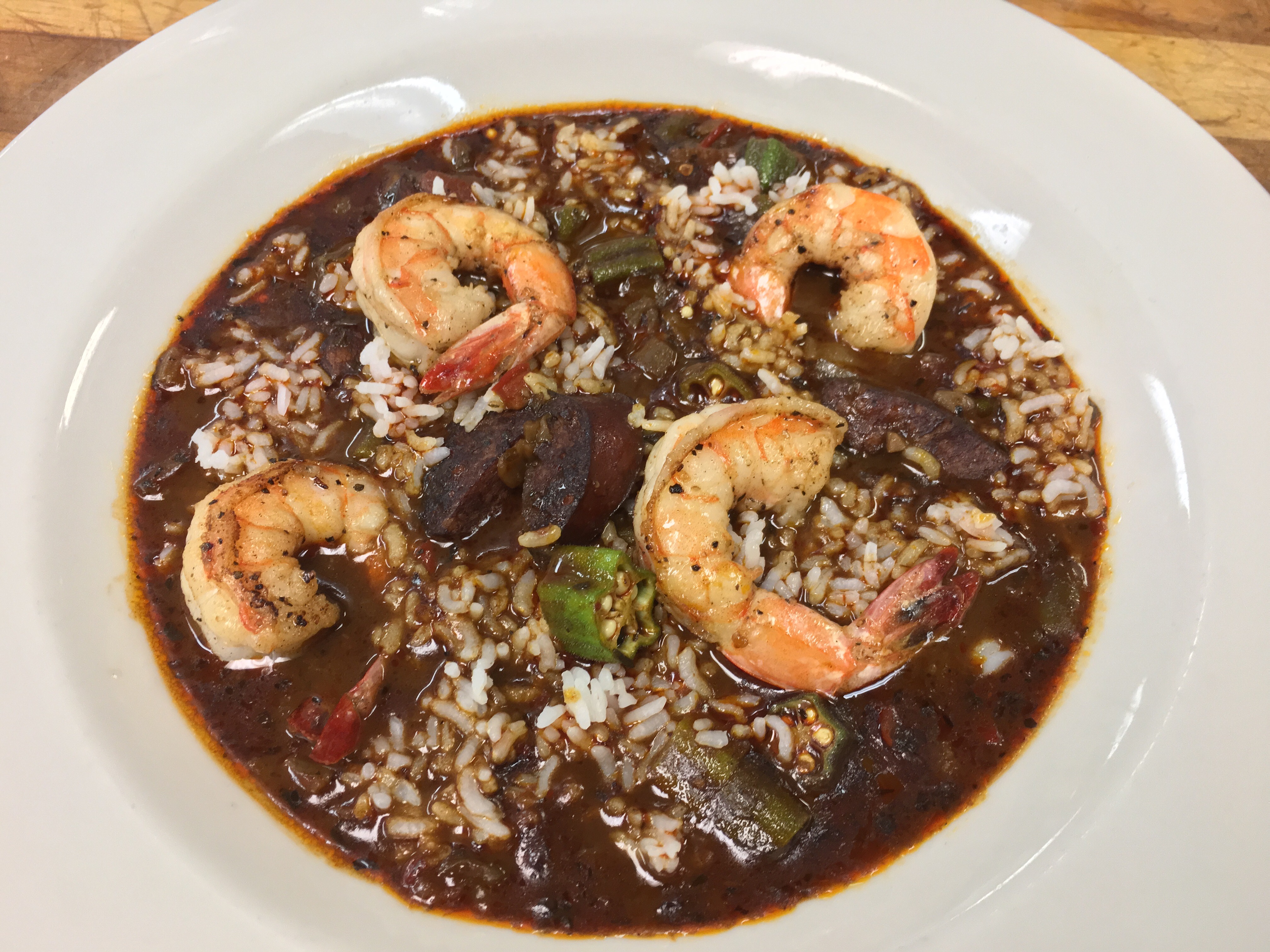 One delicious version you can make at home.

There is nothing quite like a hearty Mardi Gras gumbo recipe to celebrate our favorite Tuesday of the year. Zingerman’s Roadhouse has one we use for our Mardi Gras menu and as a special every Monday. It has definitely smothered my thoughts recently, and I can’t wait to spoon up our fresh seafood and okra gumbo. Each bite offers up fresh Gulf shrimp we order in from Mexico! By trying our recipe at home, you too can enjoy the rich stew heaped over rice and steaming with flavor.

Ours is just one version of gumbo. As amazing as it is, gumbo has a murky origin and the variations are endless. There is a great deal of controversy around its preparation and where it comes from. I wouldn’t be surprised to learn people are de-friending each other on Facebook over whose version of the Mardi Gras gumbo recipe is the most authentic.

Is gumbo a French dish?

One popular belief is that gumbo actually derives from French bouillabaisse, or fish soup. It is based on the though that the Creoles couldn’t find the fresh fish they needed to make the bouillabaisse, so they improvised with gumbo by using shellfish.

However, Lolis Eric Elie confronts the bouillabaisse theory in his cookbook Treme, stating that it “makes the least sense”. With the proximity of the Gulf of Mexico, New Orleans was not lacking in their choice of catch to make a fresh fish soup. Yet one does not traditionally find redfish, snapper, flounder, or drum in their gumbo.

Gumbo has more of an African heritage.

Instead, writings as early as 1885 claim that the influence for gumbo was West African, the name deriving from an African word for “okra”. According to Jessica Harris in The Welcome Table: African American Heritage Cooking, gumbo (or gombo, if you want to get “Frenchie” about it) stems from the Bantu word for okra, quingombo.

Considering that okra is an African vegetable and that many cooks in New Orleans during its evolution were West African, it makes sense that gumbo is heavily impacted by West African gastronomy.

The cultural heritage of gumbo ingredients.

While the beliefs about the origin of gumbo might be controversial, the diversity of ingredients is essential to the charm of any Mardi Gras gumbo recipe. Stanley Dry, a writer for Southern Foodway Alliance, asserts that “gumbo should always contain rice and be thickened.” Outside of these two constants, the dish can be as much of a melting pot as the cultural heritage of Louisiana.

Spanish settlers of Louisiana contributed peppers. Bouillabaisse and roux came along with the French. Native Americans offered filé. The story of rice itself originates out of Africa, as food historian Stephen Satterfield tells it. Then came along the Acadian manner of throwing in all the shellfish available. It’s no wonder that the history of gumbo is as rich as the soup itself.

Transformed by region, gumbo can be made with local and fresh ingredients. Gumbo tends to be a party food, or enjoyed at large gatherings, so multiple people can contribute to what goes in the soup. As long as there are vegetables, rice, and some sort of seafood or meat, the ingredients can vary based on what is readily available. Gumbo tends to be classified by these regional ingredients.

Seafood gumbo (typically made with shellfish) is more prevalent near coastal waters. Poultry and sausage are more common ingredients in southwestern Lousiana. For example, the Mississippi River Delta area of Acadiana is prevalent with duck hunting, so it is not uncommon to find duck stirred in with the Andouille sausage. More Catholic areas of Acadiana honor Lent with gumbo z’herbes, a meatless version that can be made with a wide array of greens.

There are many ways to thicken gumbo.

Another way to classify gumbo depends on whether it is thickened with okra or filé powder. Filé is a Choctaw contribution, made from ground sassafras leaf. The Creoles in New Orleans traditionally use filé to thicken gumbo when okra is out of season. Cajuns tend to make their gumbo much thicker with filé and roux, but little or no okra.

Since okra is typically not available during the winter and fall when duck and venison are available, one might be more likely to find these meats in a filé gumbo. Okra would make more sense in a seafood gumbo, because it would be in season when the seafood is fresh.

The role of roux in gumbo.

Everyone seems to have hard and fast rules about okra vs. filé, and of course it doesn’t help matters that a third thickening agent, roux, is being thrown into the mix. Roux (ROO) is a French thickener made with equal parts fat and flour, and in this case that fat is usually oil. While roux historically is not mentioned in recipes dating back to the 1800s, it has become a fundamental component in creating the smoky flavor that makes gumbo so deliciously distinct.

Opinions differ on the matter of roux as much as they do over anything else with gumbo. Generally, the roux for gumbo is cooked darker than most French roux. Creoles might use roux to thicken gumbo when they aren’t using okra, and they tend to brown it less. They also use it in lighter quantity, preferable for a thinner consistency. Many Cajuns say it must be browned to the color of dark chocolate, and may insist that the roux thicken the gumbo like a hearty stew.

At the Roadhouse, we cook our roux nice and dark. Our Mardi Gras gumbo recipe is not too thick, and the Carolina Gold rice we use from Anson Mills soaks up the toasty brown goodness. As with everything we make, the ingredients are fresh, and only the best goes into our gumbo. With the shrimp we get in from Mexico and the spicy Andouille from Aidells, we strive to tell a story with every bowl.

Of course, every story behind the gumbo is authentic, and any recipe is full of flavor and history. Each one is as characteristic as the individual who makes it, and everyone claims that theirs is the best. Assuming I’m invited to the cook-off, they are all fantastic as far I’m concerned. 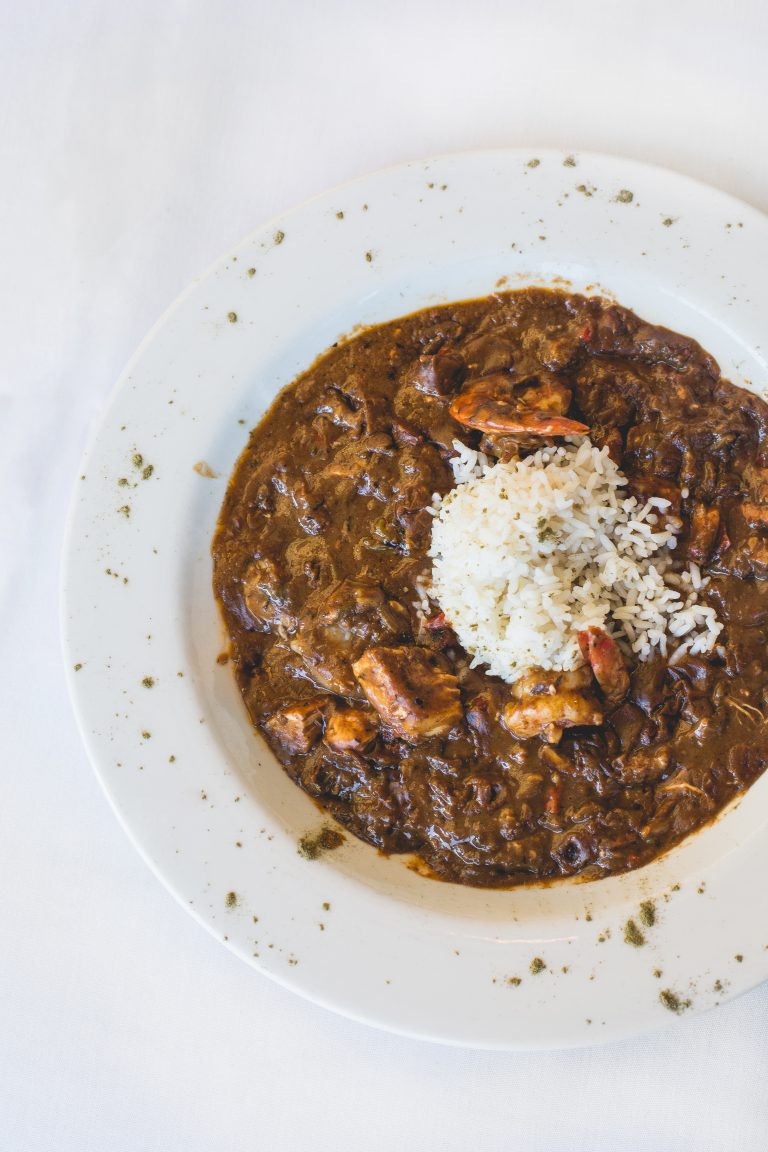 ← Previous: Gołąbki Unwrapped, Leaf by Leaf Next: Kenny’s Farmhouse: Where Sweet Dreams are Made of Cheese →