The People’s Utility Beverage, or P.U.B. Lager: Exclusively at the Roadhouse 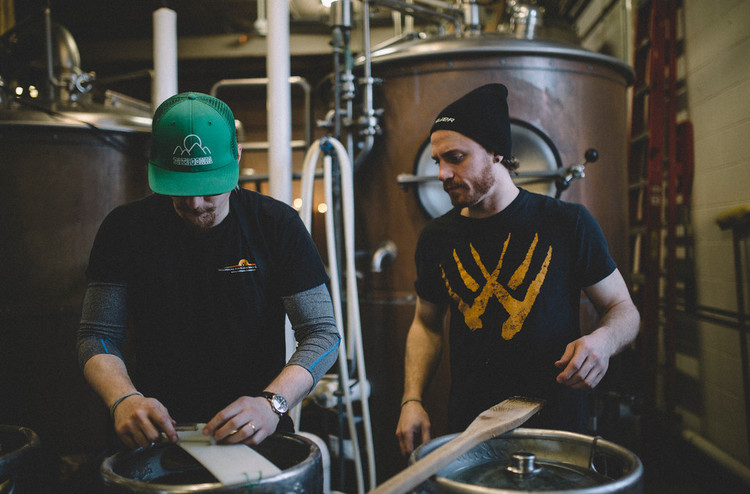 The people have spoken, and they want lager. Did you know that the Roadhouse has a craft beer created just for us and nobody else? Wolverine State Brewing CO in Ann Arbor concocted our tasty brew, the People’s Utility Beverage, or P.U.B. Lager, in 2015. We’ve been rolling out kegs of it ever since.

Wolverine State Brewing CO is the first and only brewer in Michigan to produce only lagers. It’s really quite refreshing. Don’t get me wrong, I love all styles of beer–anything from hoppy IPAs to manly stouts. It’s just that sometimes only a lager will do, but there aren’t a great deal of local microbreweries making them.

Appreciating lager, from the bottom on up.

Let’s not get our tap lines crossed, here. When I say lager, I’m not talking about that watered down stuff my uncles used to drink at the annual family picnic. You can do anything you want to a lager to give it character. Do you enjoy Dopplebock? Oktoberfest? Porter? Amber? All of these are lagers. They can be toasty and malty, or as hoppy as the Easter Bunny.

So what’s the difference between a lager and an ale? Lagers are fermented at cooler temperatures, use a bottom-fermenting yeast instead of top-fermenting, and undergo cold conditioning to develop more clarity. They are designed to be crisp and clean on the palate. Does that mean pale and flat? Only if you are drinking the wrong stuff.

Wolverine State has mastered the art of lagers. They have been cranking out small-batches of them in a 10-gallon pilot brewing system since 2006, each one crafted to have style and character, and man are they tasty. A couple of our favorites we’ve had on tap at the Roadhouse include Gulo Gulo, an India Pale Lager, and Snakes on A Shamrock, an Irish Red.

From Pub Ale to P.U.B. Lager Not to be biased or anything, but we really do love the P.U.B. Lager the best. For those of you familiar with Wolverine State, you may have met Dave Newsted and Marty Hueter. Together, they make up a dynamic duo known as the DME, The Dave and Marty Experience–and they craft really good beers.

The People’s Utility Beverage, or P.U.B. Lager, is their brainchild. Their inspiration came from a beer the Roadhouse used to have on tap, Sprecher Pub Ale. Dave loved the ale, and when he found out we no longer carried it on draft, it became the mission of DME to brew a lager that was similar. Marty and Dave crafted the P.U.B. Lager to be the cold fermented brother to the English Mild Ale. Our version is meant to have the caramel, toffee, nutty malt flavors associated with the Mild Ale style but with a brighter hop finish and more straightforward, sessionable complexity.

The light body and incredible malt of this lager pair well with pretty much anything on our menu, especially our BBQ. It stands up to our pit-smoked flavors without overpowering them. Wolverine does their own pit-BBQ, so we trust their skills in this department. They get us. And they also know our crowd, so it makes sense for them to come up with something that is approachable to our friends in Ann Arbor.

So the next time you are at the Roadhouse, order a plate of BBQ and a P.U.B. Lager. You know what, make it a tall one and hang out with us for a bit.

A Letter from Dave Newsted

It’s hard to believe that it’s been almost three years since the People’s Utility Beverage became a staple at Zingerman’s Roadhouse.

Back when I used to bartend at Wolverine, I’d occasionally swing by the Roadhouse for a beer and a bite before heading into work. My go to was the Sprecher’s Pub Ale, because Zingerman’s had it on the reg. It was beautiful. Not overly complex, malty but easy to drink, I felt I could drink this with anything they had on the menu.

One of those days, after leaving the Roadhouse and coming into work, a debate was sparked between Marty and I. The question of the hour being, “If you could only drink one beer forever, what would that beer be?” Of course, my answer was the Pub Ale.

Marty and I had been brewing small batches of experimental lagers for Wolverine at the time, putting them on display for our Sunday shifts together (many of which were spent with our favorite Zingerman’s employees). Searching for a new beer to make, we decided to make an homage to our glorious Pub Ale, but in lager form. Taking a step back from the extreme, we focused on making a beer that could be enjoyed in a sessionable, but flavorful way. After tinkering with the recipe, P.U.B lager was born.

With the dedication to craftsmanship and unwavering consistency from our brewmaster Oliver Roberts, and the pursuit of quality and passion of Zingerman’s, P.U.B has morphed into more than an outstanding draft lager for the Roadhouse. Not only can you find P.U.B in a pint, but also as the beer batter enveloping your onion rings and their fish and chips. Who would have thought that two bartenders/home brewers and a couple of awesome Zingerman’s employees, could take a Sunday special and turn it into a brew that Wolverine State makes exclusively for one of Ann Arbor’s staple venues.

This beer has come a long way from our early days of inspirations, and we hope that you enjoy our new forever beer as much as we do.

Make a reservation at Zingerman’s Roadhouse.