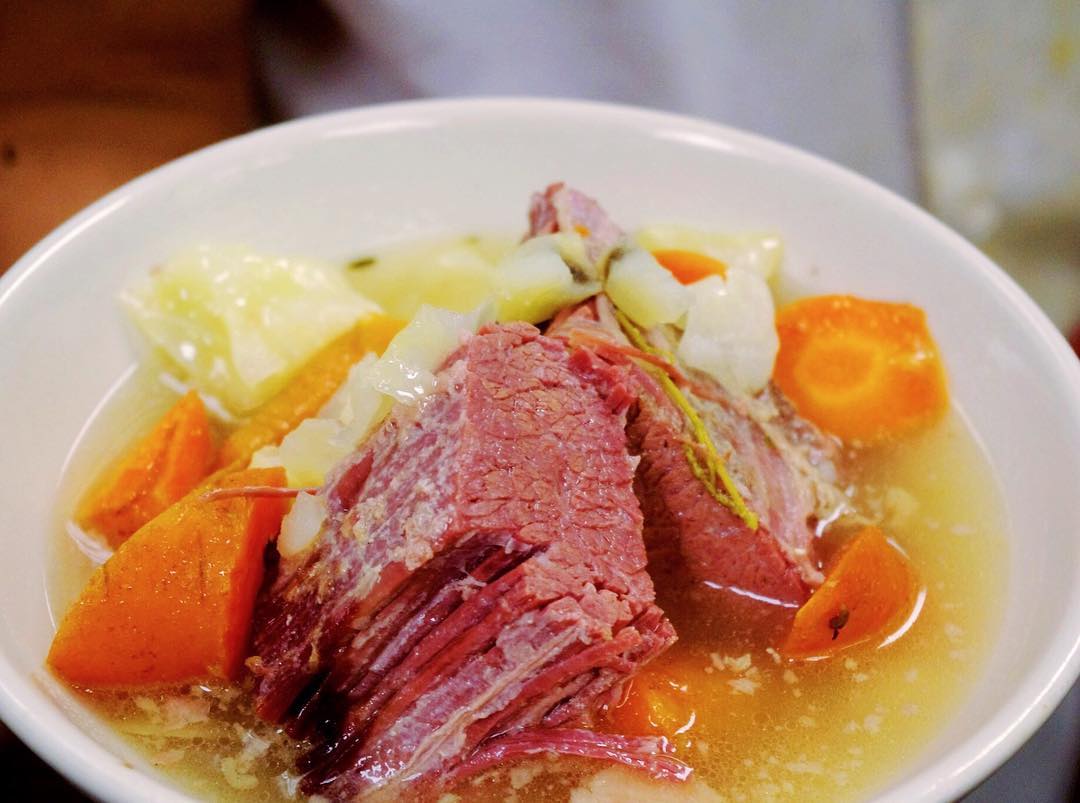 The rainbow will stop at the Roadhouse on St. Patrick’s Day! Our treasured and heartwarming Corned Beef and Cabbage will be available all day! It’s a dish that has become an absolute must have for the Irish holiday, and we use the best Jewish corned beef in Michigan to make ours!

So why is this important? Why is Jewish corned beef at the center of an Irish tradition?

Across time and oceans to your plate!

Corned beef has a long history with the Irish. In the 17th century, due to large quantities of salt and cattle, Ireland was a significant source of corned beef for Europe and America. But the Irish couldn’t actually afford to eat the corned beef they produced. So even though St. Patrick’s Day was celebrated as a religious feast day in Ireland, it wasn’t until over 200 years later that corned beef became a staple for the beloved holiday in America.

When the Irish immigrated to New York in the 19th century, they often bought corned beef from Jewish butchers. It didn’t take long for it to become a favorite when cooked up with potatoes and vegetables, especially cabbage, which was more affordable. Over time for Irish Americans, St. Patrick’s day became more of a celebration of their homeland, and they indulged in the corned beef supplied by their Jewish neighbors. Today, it is a dish commonly associated with the holiday in America, while in Ireland may people enjoy lamb or bacon.

Only the best from Detroit for your St. Patrick’s Day!

At Zingerman’s we don’t mess around with tradition, and we love our corned beef. So if we are going to celebrate St. Patrick’s Day, we are going to do it with the best Jewish corned beef we can find– the corned beef the Deli has been using since it opened its doors, from United Meats & Deli.

United Meats was started by the Corned Beef King of Detroit, Sy Ginsberg, at the Eastern Market in 1982, the same year the Deli opened! We love United Meats because they are committed to providing the highest quality, which is evident with their methods and ingredients. For example, instead of the dry, powdered garlic many people use in their corned beef, Sy squeezes in garlic juice. The juice gets soaked up by the beef, and it gives integrity to the flavor.

It is the cure for a rumbling belly!

When brisket is cured to make corned beef, it is often soaked in a salty brine. Sy uses a more traditional method of packing the beef with large grains of salt, known as “corns” because the salt is the size of corn kernels. This is the same kind of salt used by the Irish to make corned beef back in the 1600s. After curing, the beef is trimmed by hand and injected with brine by needles. This way, the liquid goodness really gets into the meat, adding flavor and tenderizing it from the inside out. Sy takes his brisket to another level with an overnight soak in brine.

Ari Weinzweig says “Good corned beef has been at the core of our work at Zingerman’s since we opened our doors! It’s been cured for us to Sy Ginsberg’s recipe for over 36 years now.  Long, slow cooking makes for that really tender, mouthwatering texture.”

You can taste the difference in the sandwiches at the Deli, and you can taste the difference in the Corned Beef and Cabbage we serve at the Roadhouse for one of our favorite holidays. It is melt-in-your-mouth tender, lovingly braised by our chefs with locally farmed vegetables. A bowl steaming full of love and Sy Ginsberg’s Jewish corned beef is just what you need on St. Patrick’s day! See you at the Roadhouse!

Stop in to celebrate with us, or make a reservation!

← Previous: Fried Chicken at the Roadhouse Next: Hummingbird Cake- More Fruit Than Flour﻿ →