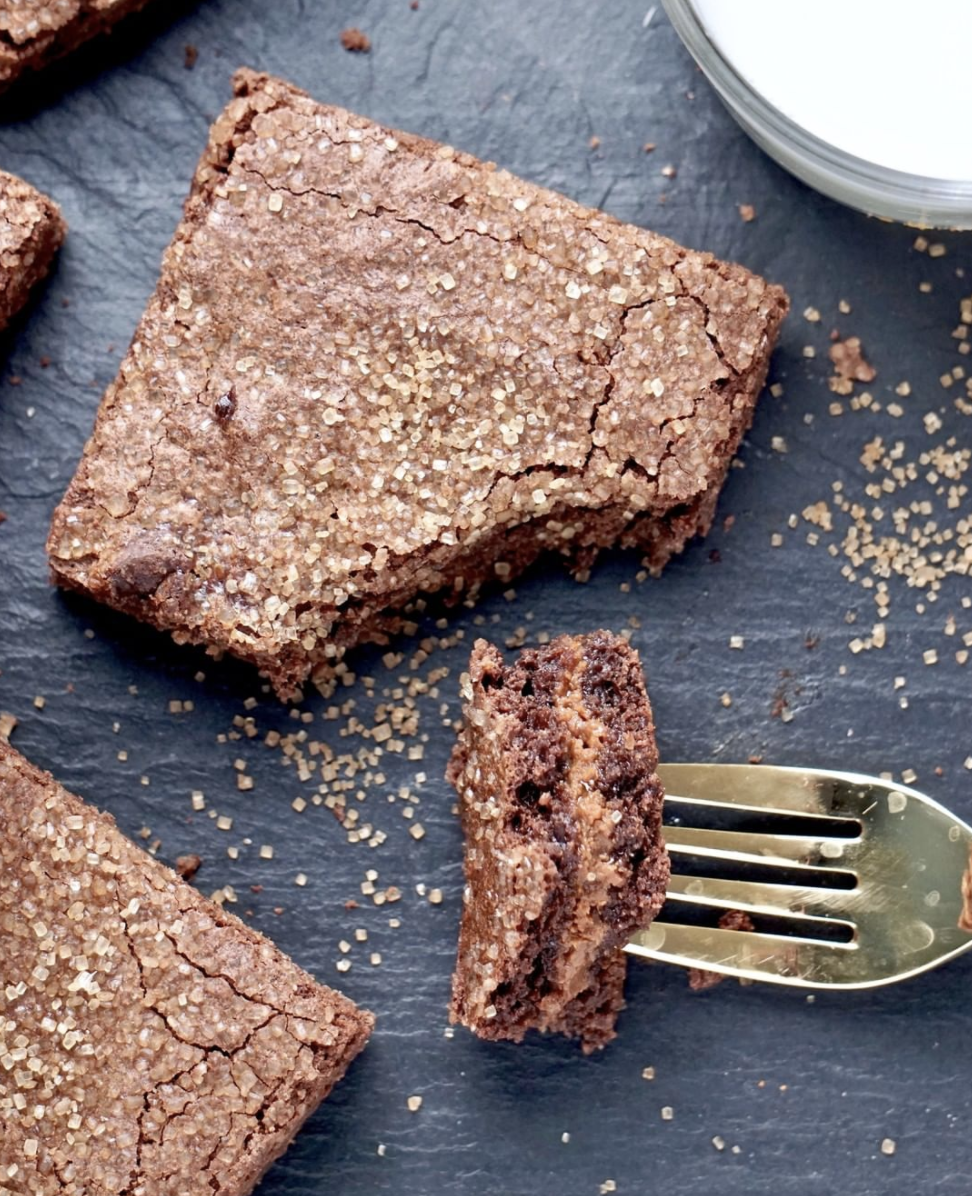 While they’re not our top seller, the Buenos Aires Brownies from the Bakehouse just might have the most loyal fan club of anything we make. While many folks still aren’t familiar with them, the ones who are start to swoon and wax poetic at the mere mention of them. If I remember right, at one point we put them “on vacation,” but we heard so many comments from highly concerned customers that we quickly brought them back.

The best of two worlds in one brownie.

The Buenos Aires Brownies are, I’ve realized, a great culinary coming together of two classic comfort foods—one from each of the two American continents. Dulce de Leche, from South America, has its generally acknowledged roots in 1829, or so the story goes, when a cook preparing sweetened milk to drink at a peace treaty meeting between two warring politicians left the milk on the stove too long and it cooked down into a confection the texture of a thick honey. The meeting failed (having nothing to do with the overcooked milk) and Argentine politics and factionalism continued on in conflict for decades. The nation did seem to coalesce, though, around the wonder of this new confection. To this day, Argentines eat Dulce de Leche even more than Americans eat peanut butter or Italians eat Nutella—whether it’s on toast, in tarts, layer cakes or cookies, many people won’t go a day without it. With this story in mind, Argentina claims Dulce de Leche as its own. But in the same way that the American South is deeply and intensely divided about the “proper” way to make BBQ, pretty much every country in South and Central America has its own slight variation on the recipe and many still lay claim to being the true origin of Dulce de Leche as well.

The possible birth of the brownie.

Brownies, the North American contributor, date back to the late 19th century. The most interesting origin story I’ve seen is that they were developed by an unknown pastry chef in 1893 at the request of Bertha Palmer, the wife of Potter Palmer, founder of the famous Palmer House Hotel in my hometown of Chicago. She wanted a dessert that well-to-do and proper citizens could carry to the World’s Columbian Exposition, also known as the Chicago World’s Fair, and brownies are what she got. The original, for what it’s worth, apparently had an apricot glaze. Earlier that year the Crash of 1893 was caused when a coup and a wheat crop failure in Argentina sent stock prices falling. Hence, both Dulce de Leche and American brownies were “born” in the shadows of Argentine politics—it’s all the more fitting then that they now come together to form such an enjoyable, rich, sweet union.

What makes our Buenos Aires brownie so good.

A century or so after the Palmer House brownies were first introduced, the Bakehouse came out with this exceptional Buenos Aires brownie. That dark chocolate Black Magic Brownie, split down its horizontal middle with a layer of the Dulce de Leche. Creamy, a bit gooey on a hot day, chocolatey . . . all topped with amber-colored crystals of Demerara sugar. Pretty terrific! You can buy the Buenos Aires brownies on their own as individuals, or in the ever-popular Bakehouse Brownie Party 4-Pack (the Buenos Aires is always on the top of the stack so its delicate, lovable, lusciousness doesn’t get squeezed out by the other three.) I will confess that the way I like to eat a Buenos Aires Brownie is to gently push a few of the great Piemontese hazelnuts I wrote about last week into the Dulce de Leche at the edges. The crunch and savoriness of the nuts make for a marvelous contrast to the lusciousness of the brownie and Dulce de Leche. Of course, the Buenos Aires Brownies go great with a good cup of coffee—the Costa Rica Reserve that’s the coffee of the month, has been terrific! (In Costa Rica they call Dulce de Leche “cajeta” and use it, among other things, to stuff sweet empanadas!)

We have them at the Roadshow, along with many other Bakehouse goodies!