New at the Roadhouse: Paesano Pizzas! 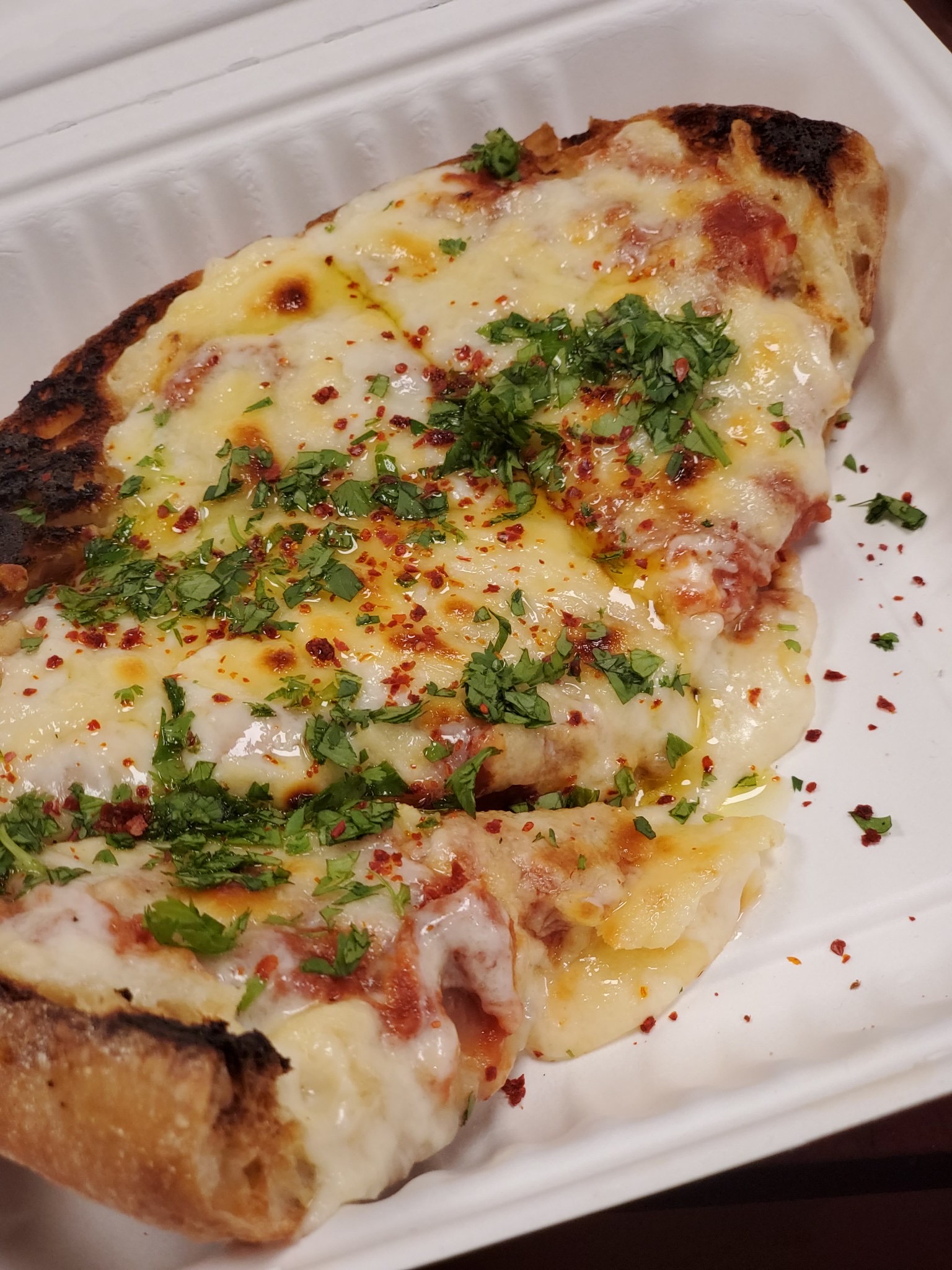 A piece of my childhood that makes for marvelous adult eating.

One of the things I feel like we’ve done well in our nearly 40 years of working together at Zingerman’s is to take childhood comfort foods that people became accustomed to in commercial form, and then “remake” them using really great ingredients! We end up with something that tastes so good, folks freak out! Zzang!® bars are the classic in my mind. Make a candy bar out of homemade peanut butter and honey nougat, butter-toasted Virginia runner peanuts, dark chocolate, and a tiny touch of sea salt, and you get something that feels comforting with a whole new level of quality. On a similar note, I think about the Graham Crackers at the Bakehouse, the handmade Cream Cheese at the Creamery, or the corned beef hash at the Deli. Now I’m adding another one to that list: the new “Paesano Pizzas” at the Roadhouse.

What I know and love about pizza.

For context, let me say that I’ve studied a fair bit about and eaten regional pizza specialties in Italy, especially in and around Naples. Over the years, I’ve eaten at the many great New York City pizza-by-the-slice-spots (salute to Joe’s). There’s also the long-standing Detroit-style recipe right here in Michigan. And I love my friend Chris Bianco’s work in Arizona. Each is an amazing tradition that I’ve revered for years! These Paesano Pizzas at the Roadhouse, to be clear, are not meant to compete with any of those. Instead, they go back to my childhood. (And, maybe, to yours.) They’re, essentially, what my friend John T. Edge would call an “homage” to English Muffin pizzas!

The pizza of my childhood.

My mom was a good person; not necessarily a great cook. I learned many things from her, but food and cooking weren’t on that list. Unlike so many other folks I know who work in the food business, I wasn’t raised with wonderful memories of amazing family meals, or generations-old recipes that we handed down. We were, I guess, in the middle. Middle class. Middle West. Middle of the 20th century. Meals that were completely of their era of industrial American eating that probably should have been billed as “factory to table.” Kraft mac and cheese® out of the box; hot dogs (from the freezer) and baked beans (from the can); Pop-Tarts®; tuna noodle casserole, Nestle’s® Quik. It sounds suboptimal now, but that doesn’t mean that we didn’t enjoy what we were eating. One of our big treats was those English muffin pizzas my mom would make. You take an English muffin and split it. Give it a light toast. Add tomato sauce (which I’m sure came from a can) and some cheese. Melt the cheese until it’s bubbly hot. I loved ’em.

How we are making Paesano pizza at the Roadhouse.

What we’re making at the Roadhouse is our 2020 version of those English muffin pizzas. We start with the super popular Paesano bread from the Bakehouse. Instead of cutting slices from top to bottom, we first cut it horizontally, and then cut it again, into good-sized “pizza-shaped” wedges. Which, if you know the bread, results in a surface that closely resembles all those holes and crevices of an English muffin. Then we make a really marvelous tomato sauce. Kudos to Chef Bob Bennett for crafting it—it’s deliciously bright. The key to its quality is the tomatoes—they’re the “Bianco Napoli” tomatoes we get from my friend and nationally-recognized pizza maker Chris Bianco out in Arizona, produced in collaboration with his friend Rob DiNapoli and California farmer, Cliff Fong. I’ll write more about the sauce and the tomatoes down the road, but for right now I’ll just share that 10 days after the pandemic period started, The New York Times ranked Bianco Napoli #1 of the dozens of tinned tomatoes they taste-tested: “The most balanced tomato, in terms of sweetness and acidity, and one that passed Julia Moskin’s test: being put on a sandwich straight out of the can.”

Why our pizza is so good!

When you place your order, we top each slice (you get two slices in an order!) with a generous spread of the Roadhouse tomato sauce. We top that, in turn, with a nice handful of grated Monterey Jack cheese from Vella Cheese. I’ll note here that Vella’s real, traditional, handmade Monterey Jack is a world-class offering. No joke. Ninety-eight percent of the Monterey Jack you’ll see is made to use up marginal commercial milk because it has a short make time and requires really no aging before it’s ready for sale. But the Vella cheese—made since the early years of the 20th century—is super special. Aged for a few weeks, it is softer and more flavorful than the commercial, almost rubbery, stuff we’re used to seeing. We throw it under the broiler the way my mom did with the English Muffin pizzas, wait til it’s hot and bubbly, pull it out, and finish it off with a touch of extra virgin olive oil, chopped herbs, and Maras red pepper from Turkey. Truly awesome!

If you’re going to take the pizza home, you’ll probably want to heat it up before you eat. Just put it in a 350° oven on a baking sheet until it’s hot and bubbly. I like to drizzle on a little more extra virgin olive oil and some freshly ground black pepper before serving.

Order our Paesano pizza with our new online system!

← Previous: The Art of Business (and Life and Everything Else) Next: Buenos Aires Dulce de Leche Brownie →