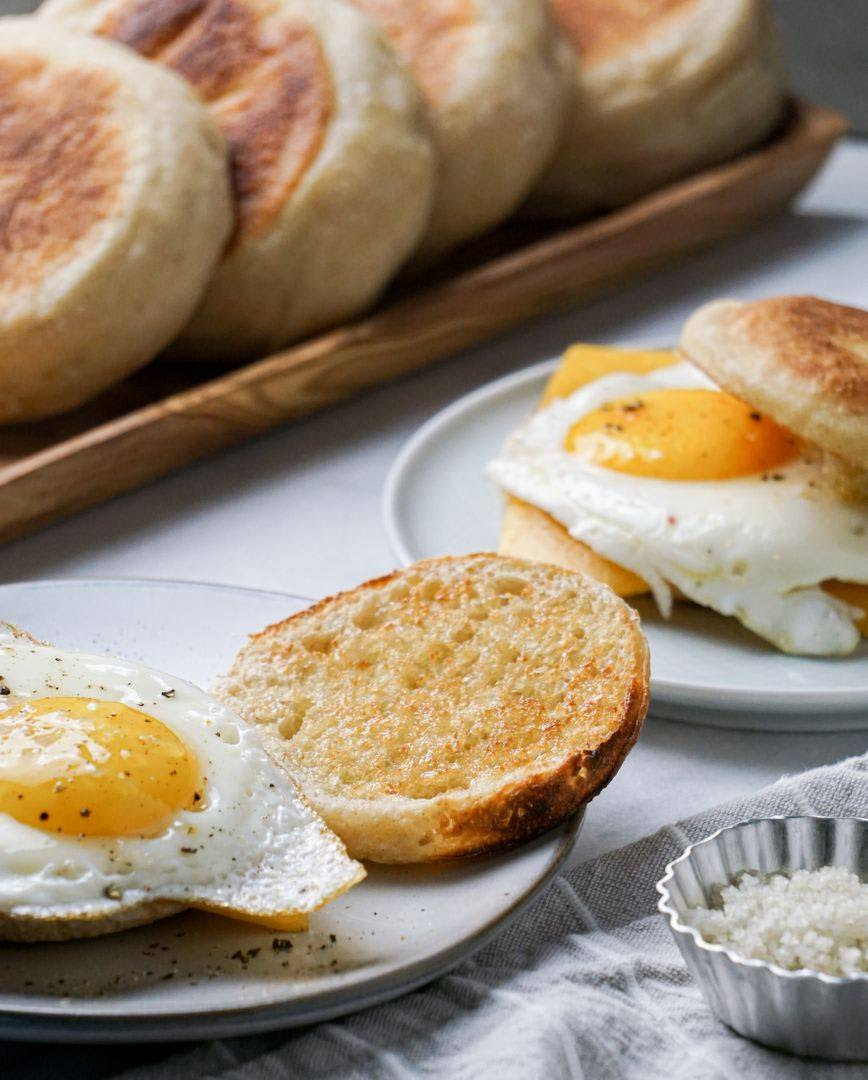 We’ve been talking about making English Muffins for about 15 years, I think. And now, I’m thrilled to say, they’ve arrived. They debuted at the Bakehouse in the summer of 2020. Since we like to put our own spin on things, and it’s good to have fun even in difficult times, we’re calling them Zing-lish Muffins. Bread lover that I am, I have already eaten a lot of them. I can tell you that they’re at their best when you open them with your fingers or a fork. (Slicing them with a knife leaves the surface too straight and takes away the full flavor experience.) They’re terrific toasted and topped with butter or cream cheese. Or better still, with butter and cream cheese both. Or jam. Honey has been a big hit too. While not English at all, they’re terrific toasted and topped with olive oil. They’re very good eaten just as they are, the morning they’re baked—held in one hand and eaten bite by bite without even being sliced. I’ve come to think of them as an old English version of a bialy. I’ve also realized that most of the country has never, ever, eaten a freshly baked English Muffin! They’re marvelous.

The story behind the English Muffin.

Historically, English Muffins are generally believed to have been “invented” by Samuel Bath Thomas who brought the recipe to New York City from England. (Back in England, they were known as simply “muffins.”) They were said to be Mr. Thomas’ family recipe for crumpets, but he took out the baking soda and griddled them on both sides instead of just one (the way a crumpet would be), and behold, the American English Muffin was born. He began baking them for a living in 1880, the same year Frederick Douglass published one of his most powerful essays, about the failure of the Reconstruction. Bay’s English Muffins started in 1934 in Chicago (which explains, as a Chicago kid, why it’s the brand I know best), again by a family recipe brought over from England.

How we make our Zing-lish Muffin.

At the Bakehouse, not surprisingly, we’re making Zinglish Muffins in a method not far off of what would have been done back when English Muffins were made by hand and sold fresh like other breads, not a stock item in supermarket freezer sections. We’re using a blend of organic white all-purpose and freshly milled soft red wheat from Saline, water, sea salt, and a small amount of yeast. The Bakehouse crew allows about 24 hours of fermentation to let the flavor of the dough develop. Then we griddle them with a touch of butter. Frank Carollo, longtime co-managing partner at the Bakehouse says, “These muffins have a wonderful familiar flavor. I find the crumb unique to all of our baked goods in their tenderness and slightly sweet aroma.” As is generally the case after tasting food with Frank for four decades now, we’re in full agreement.

You can get the Zinglish Muffins at the Bakehouse, Deli, and Roadhouse on Tuesday, Thursdays, and Sundays. The Roadhouse also has a fantastic Zing-lish Muffin Sandwich available for breakfast and brunch, made with Roadhouse breakfast sausage, fried eggs, and Hook’s 7-year cheddar.

← Previous: Terrific Breakfast Tacos at the Roadhouse Next: Sticking With Stuff Through the Zone of Doubt and Blame →