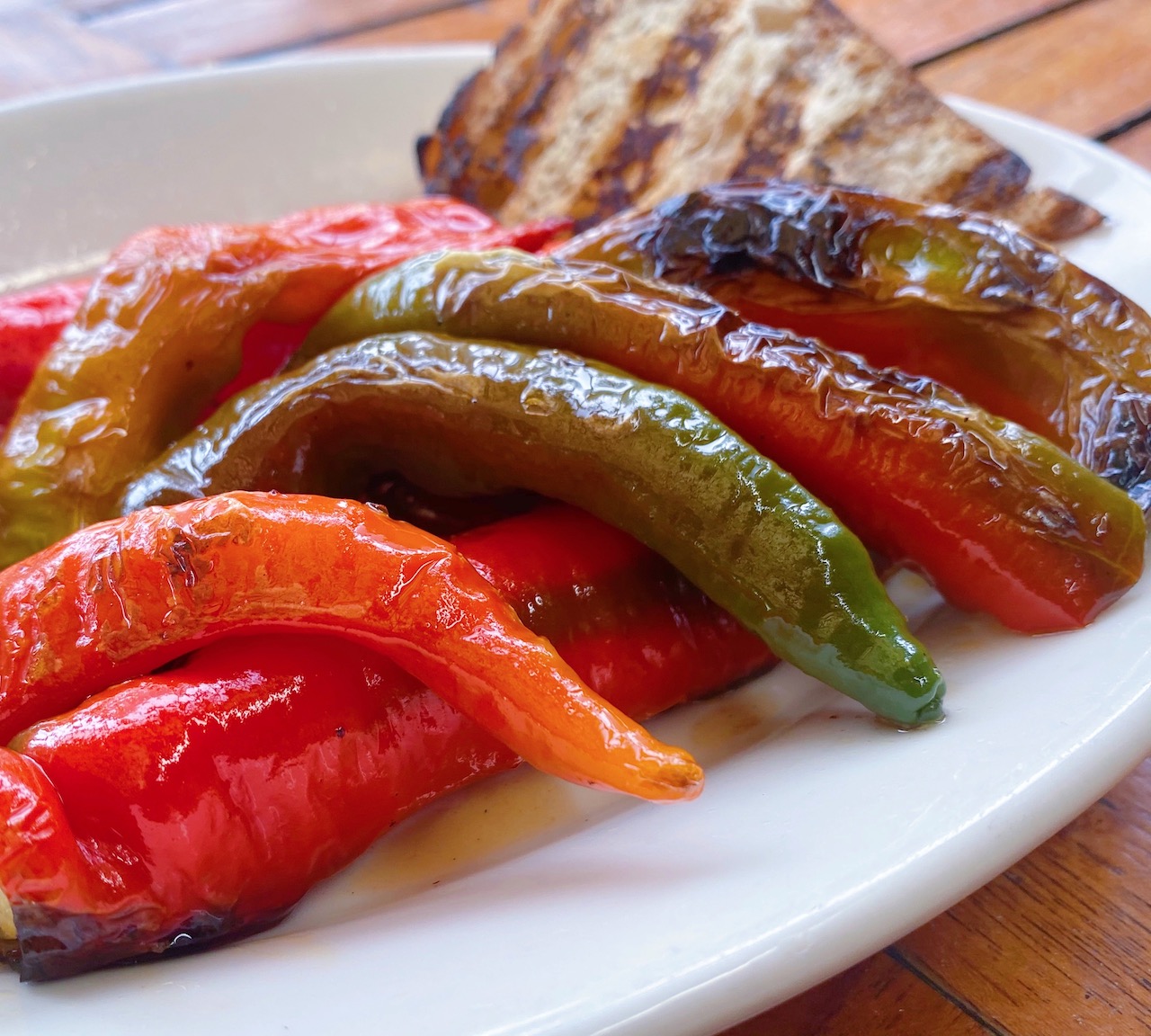 The selfish part of me wants to keep these a secret. The less anyone else knows about them, the more I get to eat. But, of course, everything about Zingerman’s drives me in the other direction—to actively spread the word about this super tasty, old seed variety, to share its wonderful story and to encourage as many people as possible to enjoy them. If you want to bring a little loveliness into your life in a small but meaningful way, swing by the Roadhouse and order some of these Jimmy Nardello peppers.

If you’ve never had Jimmy Nardello peppers, get ready for one of the most delicious things you have eaten in a long while. Tammie turned me onto them when we first met nine years ago in SF. I think in that first summer, about this time of year, she used to eat them almost every night. Once I tried them it wasn’t hard to understand why—when you pan fry them in olive oil and salt they’re so, so good. Seriously, I can’t get too many of them! We have them on the menu because, in order to get her fix, Tammie started growing her own out at Tamchop Farm. They only come in for a few weeks, so, ’tis the season!

The story behind the Jimmy Nardello pepper.

The story of the pepper goes back nearly 150 years, to Connecticut in the year 1887. Well, really, it goes back before that. Chiles were native to the Americas and were “discovered” in the late 15th century by invading Spaniards. The Spaniards, in turn, brought them back to Europe. The chiles they found had of course been growing in Central and South America for thousands of years. The “peppers” they “discovered” came back to Europe and spread around the world. Different varieties became incredibly popular in different parts of the Mediterranean, Asia, and Africa. Because they grow well in the Mediterranean climate, poor people who couldn’t afford black pepper could grow them and add some spice to their diet. It’s hard to imagine Spain, Hungary, Italy, Greece, Morocco, Tunisia, etc. without peppers, but up until about 300 years ago that was the reality. The same goes for the cooking of the countries of Africa and Asia. Look at how critical chiles are to the cooking of Korea! If you want a taste test, take a trip to Miss Kim!

The reason the story of Jimmy Nardello peppers starts in 1887 is because that’s when the seeds for this pepper came to the United States. Jimmy Nardello’s mother, Angella Nardello, brought them from her hometown of Ruoto in the Basilicata region of southern Italy. They ended up in the town of Naugatuck, near New Haven, in Connecticut. The town is known for being the original home of the Goodyear Rubber Company, Keds Sneakers, and Naugahyde. But for me, by far, its biggest claim to fame is the Jimmy Nardello pepper.

After arriving in the U.S., the Nardellos, like nearly every poor Italian family of that era, started a garden. Signora Nardello planted the special pepper seeds she’d smuggled in on the ship and she grew them and a wide range of other vegetables for her whole life. Mr. and Mrs. Nardello had 11 kids—Jimmy was fourth in line. Jimmy loved gardening. He lived a long good life, passing away in 1987. Before he died he donated some of his mom’s special pepper seeds to Seed Savers. Twenty years later, in 2005, Jimmy Nardello peppers were honored with a spot on the Slow Food Ark.

How to eat Jimmy Nardellos.

Like all of Tammie’s produce, the Nardellos are grown strictly from seed. All the plants are hand watered (it’s easy to overwater by mechanical means—you get more weight but a lot less flavor), all are organic, and they taste terrific! And as most of you know, she also grows them with a lot of love and care! We serve the Nardello peppers at the Roadhouse by simply blistering them in hot olive oil and seasoning with salt. You eat the whole pepper, other than the stem. They’re a bit sweet, not spicy, amazingly rich, and almost buttery in their texture, with just a hint of smokiness from the charring of the skins that happens in the pan. The Nardellos are super full flavored with a great long finish. If I were coming in for dinner (or doing carryout), I’d probably go through a whole plate by myself. Tammie would likely eat two.

If you like great food, seasonal produce, full flavor, and good stories, swing by to order some ASAP. We can only get them for a few weeks, which means it’s a bit like Wild King Salmon from Alaska or Michigan strawberries—you can only get them for a very short window of time, and you want to eat as much as you can while they’re here! Once you try them you may well be as hooked as Tammie and I have become. And if you want, make a toast to Jimmy Nardello who cared enough about legacy, tradition, and great taste to gift some of his mother’s seeds so the rest of us could grow, cook, and enjoy them. If art is how we eat as well as we think, these would be a wonderful piece of pepper poetry to put on your plate.

Read more about these delicious peppers!