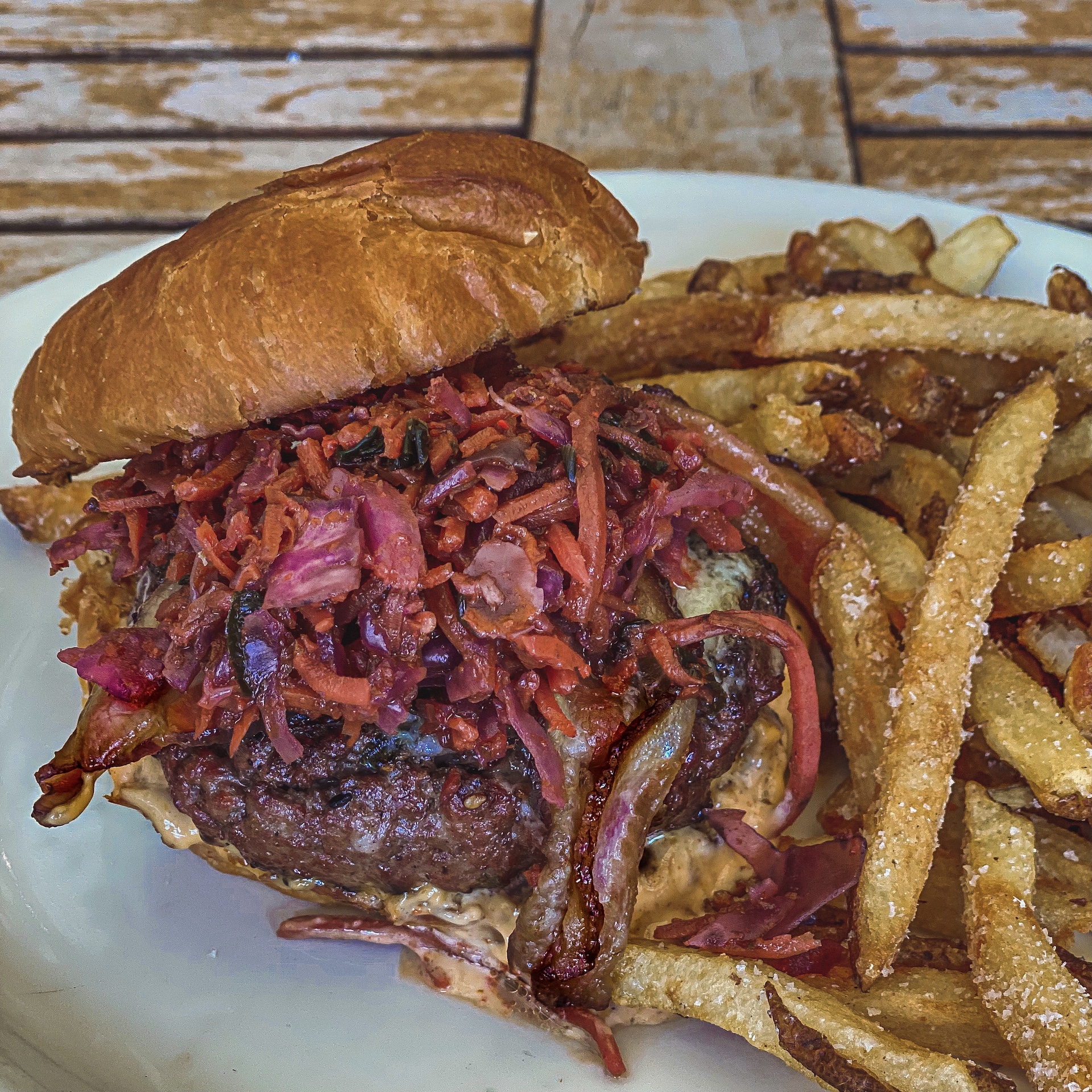 A creative and tasty intra-ZCoB connection

As you will likely already know I’m a big believer in connecting around food and culture. I wrote extensively about meaningful collaboration in Secret #39 in Part 3. It brings together diverse perspectives, skillets, and experiences—the outcomes are very often what come to be called creative breakthroughs. The key is that creativity can be encouraged, but it can’t be controlled. As Peter Senge says, “Your primary influence is the environment you create.” With all that in mind, I’m happy to report on this compellingly delicious burger by Roadhouse sous chef Chris Chiapelli—created through a series of conversations with Miss Kim chef and managing partner, Ji Hye Kim. It’s both tasty, and timely, a culinary and cultural inspiration and a meaningful call to action in multiple ways.

Chef Chris shared a bit of the back story:

One our line cooks Drew had made some Kimchi. I was pretty impressed after tasting his final product so being the Sustainable Chef that I strive to be I thought of trying to use it with a new burger. I have a killer recipe for Bulgogi Marinade (soy sauce, salt, scallions, garlic, black pepper, sesame oil), and I also realized it was gonna need a few more components to it—like The Brinery Sriracha and Kewpie Mayonnaise. Our Cabot Cheddar was a go-to, as was our amazing Nueske’s applewood smoked bacon. We’ve started using the kimchi from The Brinery as well.Then I reached out to Ji Hye and she suggested some ways to make the marinade better still. My wife had just bought these Asian Pears, so I juiced them and also added honey as per Ji Hye’s suggestion. Ji Hye inspired me to make this more than just about a burger, to honor the meaning behind it given the times we’re living in. When I went home to share the good news with my wife, she immediately talked about what’s been happening to the Asian American community in the last few months. She has a lot of friends whom she works with at the hospital here who are scared to even walk to their cars at night in the parking structures!! She was brought to tears telling me all their struggles. And that is when I finally realized that this is way bigger than us, and if there is anything that we can do to bring the situation to light to this then we must do it!

Bulgogi is one of the most popular and well-known Korean dishes. The oldest mention of it goes back to the 3rd century in a book called Sushingi, where it was documented that meat marinated in garlic chives and fermented soy paste was grilled over open fire by the clan of Mac in Goguryo Kingdom (modern day North Korea and Manchuria). While the following kingdom of Goryo was a Buddhist nation and mostly vegetarian, a documentation still survives of a grilled meat dish that was especially enjoyed on snowy nights. The first time you see a written recipe resembling bulgogi is in the 1800s, where beef marinated in soy sauce was grilled over fire.A sort of minced beef patty version, tteokgalbi 떡갈비, came from the palace as a highly prized dish served to kings and queens. The extra effort and knife skill involved in turning a slice of meat into a well-seasoned patty was appreciated, and eventually makes its way into aristocratic households, then to the restaurants in the early 1900s. It continues to be popular. McDonald’s in Korea even took it as an inspiration for their Korean-only special bulgogi burger.  A famous painting by late Chosun artist Gim Hongdo shows it—the title of this painting translates roughly to “meat feast in snowy evening.” You can see a round fire pit grill with meat on top.I think the burger made with bulgogi marinade is a great idea, especially because Roadhouse has an open fire grill for the burgers. Putting a bulgogi patty into a burger may not be traditional, but grilling it over open fire is, and the marinade and flavors are too. I can’t wait to try this burger. With the inhouse made kimchi, the good cheddar and Nueske’s bacon, I am sure it will be fit for kings and queens amongst us.

The results are not only inspiring, they’re also tasty.

The Roadhouse has long used only pasture raised beef. We bring in whole sides, dry age for three to five weeks, then butcher the beef in the back kitchen. For burgers we grind fresh pretty much daily, then hand patty the meat to avoid the compression that goes with the common industrial patty-making machines (looking for that control and consistency). To add to the “out of control,” the burgers are cooked over a live open wood fire where hot spots are different all the time!

This coming together of Korean and “American” (the origin of hamburgers is the German city of Hamburg) cooking traditions has been happening in the U.S. for over a hundred years now. The first meaningful wave of Korean immigration to American territory started in the late 19th and early 20th centuries. After the Chinese Exclusion Act of 1882 became law labor recruiters sought out Korean men to take the place of Chinese workers. Among the early immigrants was the humanitarian Ahn Chang Ho, who published under the pen name Dosan. He arrived in the U.S. in 1902 to get an education, then went on to found a Friendship Society in 1903 and a Mutual Assistance Society in 1905. His teachings are inspirational. Here are a couple that seem right for the moment:

Come by the Roadhouse and dig into this burger that’s a culmination of folks working together and having great conversations to make the world a tastier place.

← Previous: Rhode Island Coffee Milk Next: Mussels with 'Nduja at the Roadhouse →