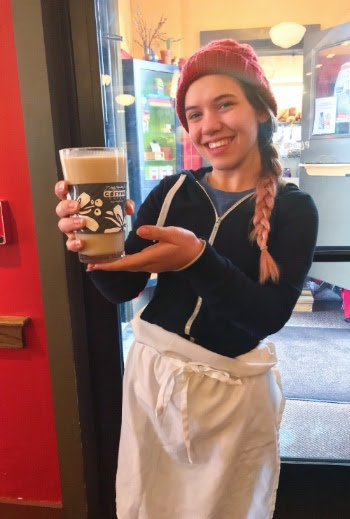 The state drink of Rhode Island at the Roadhouse

Nearly 30 years ago now, in 1993, while Paul and I were working on our first formal vision (called Zingerman’s 2009), the LA Times wrote that,

John Ferreira knows when he’s left his native Rhode Island—he can’t get a drop of one of his favorite drinks. “You ask for coffee milk in any other state, and they look at you like you have three heads,” he said. “That’s when you know you’re not home anymore”… “It made you feel more adult,” said Ferreira, who had his first sip as a first-grader in Catholic school in Pawtucket. “Your parents drank coffee, and you used to sneak a sip when they weren’t looking. Coffee milk was a cool thing to do.”

The big debate over the official state drink of Rhode Island.

It was with this in mind, that earlier in 1993 State Representative John Barr brought forward a bill to make coffee milk the official drink of Rhode Island. He imagined it would add a little levity—and maybe even raise hope levels—during a period of economic hardship. What he thought would be easy, though, turned out to be anything but. Other legislators fought hard against the bill, advocating instead to make Rhode Island lemonade the state drink. (I know the feeling of tripping over unexpected opposition to something you thought was insignificant. In the “Bottom-Line Change” pamphlet I shared the story of how much resistance I got years ago when I wanted to change my favorite bread. If you have the pamphlet, it’s on page 14.) Lest you think the current state of politics is unique to the pandemic,

“They went at it like the Hatfields and McCoys,” says Rep. John Barr, who sponsored the House bill under the mistaken notion that it would “bring a little levity” into a session. With Rhode Island facing widening deficits and budget cuts, some Rhode Islanders object to the beverage brouhaha. “I’m appalled that they’re debating this at a time when the state is really going to pot,” says Jonathan Roy, of Pawtucket, himself a lifelong coffee-milk drinker.

You can read the details of the debate about coffee milk in this write-up.The reason I’m writing this is not to highlight the dark side of political divisiveness, but rather to share the wonderfulness of the Rhode Island state drink. Although only a small number of folks in town know it, coffee milk is a bit of a secret special at the Roadhouse. (We also make our lemonade, so no need to refight the great drink debate of 1993.) If you’re from Rhode Island and you come by the Roadhouse, ask for coffee milk and you might feel like you’ve come home. We will happily pour you a glass. If you’ve never had it, just ask for a taste. While I don’t think it’s ever going to approach the same sort of status here that it has in Rhode Island, it is pretty terrific.

Why coffee milk is deliciously worth the debate.

To back up a bit, coffee milk seems to have been around the Ocean State since the 1930s. Although it’s unlikely that no one other than Rhode Islanders have mixed cold milk, coffee, and sugar together, for whatever geographic and historical reasons, the good people of the nation’s smallest state seem to have latched onto it with a love and affection that English people have for tea. The first coffee syrup available for retail sale was a Warwick-based brand called Eclipse, which made its debut in 1938 and became known for the memorable slogan, “You’ll smack your lips when it’s Eclipse.” But a little Ann Arbor “story behind the official story” came up when I was meeting years ago with Jan Longone, the nationally known culinary historian and the woman whose generosity made possible what’s now known as the Janice Bluestein Longone Culinary Archive at the Grad Library, a floor or two away from the anarchist Labadie Collection (much of life seems to be encapsulated by those two collections!). We were planning a meal for attendees as part of a culinary symposium (back when we could have symposiums in person), and I mentioned that when folks arrived at the Roadhouse for the Sunday-after-the-sessions brunch that we could start them outside at the Roadshow with a quick taste of Rhode Island coffee milk. Jan immediately lit up and said, “You know, my uncle actually invented that.” Well, actually, I didn’t know. But I have no reason to doubt that he did. As a very careful and detail-oriented historian, Jan doesn’t spin stories out of hand. She closed her eyes, and said, “I can still taste it.”

The story is that Jan’s Uncle Meyer was a Russian-Jewish immigrant who loved to tinker with things. And seemingly he took the Rhode Island love for strong, sweet coffee—likely based on the heavy concentration of both Italians and Portuguese—and turned it into a cold drink. We don’t have his exact recipe for the coffee syrup, but, apparently, he shared it with someone he knew in the interest of getting it produced and patented. The man, whose name we no longer know, absconded with it instead. All these years later, and 600 miles to the west, the Roadhouse makes its own syrup, much as Jan’s Uncle Meyer might have done back in the 30s—Roadhouse Joe from the Coffee Company, cooked down slowly with sugar.

Get your coffee milk at the Roadhouse!

When do you drink coffee milk? Anytime and anyplace. In Rhode Island it’s a standard option for kids—white milk, chocolate milk, coffee milk—and adults love it too. If you’re not into hot beverages, it’s a great way to get the day going. Maybe we should try it as a Rhode Island version of White Russian? It’s a really good way to end a meal along with one of those Big O’s I wrote about last week from the Bakehouse. Pull up to the Roadshow anytime and ask for a taste or just order one up, put political division aside, and drink a cool toast to Uncle Meyer and a Rhode Island classic.