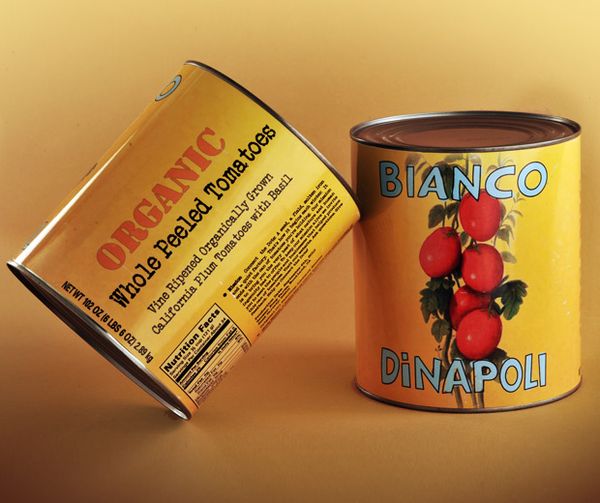 So good, I’ve been eating them right out of the can.

For years now I look forward to the late-July, early-August arrival of local heirloom tomatoes. I’ve long loved them and work to get as many into our cooking—at work and at home—as I can. That passion got even bigger still when Tammie started her own farming work four years ago—heirloom tomatoes are one of her main focuses, and I get to eat them at home pretty much every evening for the two to three months she has them. When the weather turns cold in the fall and Tammie and other local farmers pull their plants out, from that point forward I’ve generally eaten very few tomatoes until the season comes around again.

A big part of that annual tomato cycle shifted for me last year. The best part of the culinary year for me remains the local tomato season in late summer, but what’s different now is that we have regular access to the incredible canned tomatoes from my friend Chris Bianco. The tomatoes themselves are grown out in California, by Chris’ friend, Rob DiNapoli. The DiNapoli family has been canning high quality fruit since 1939. Their collaboration on these tomatoes is seriously world class—the tomatoes are so tasty that, no joke, I eat them right out of the can!

Why are Bianco DiNapoli tomatoes so good?

What makes the Bianco DiNapoli tomatoes so marvelously magical? They’re all organically grown, they’re hand selected to make sure they’re properly ripe (since not every tomato on a plant is ripe at the same time), and then they’re steam-peeled. No additives, no preservatives. Each can gets a couple leaves of fresh organic basil and a small bit of Pacific sea salt. The salt is delicate, but important. Chris shared that, “I found, much like pasta cooked in unsalted water, balancing the salinity afterwards has an outside-in effect on the fruit that I found not to be as thorough as I liked.” Which is one reason that they’re so darned delicious right out of the can. We have the tomatoes both “crushed” and “whole.” If you buy the latter, you can simmer them briefly with olive oil, sea salt, and pepper and you’ll likely have some of the best stewed tomatoes you’ve ever had. I made some last night and ate most of them with nothing more than toasted Paesano Bread from the Bakehouse.

How to make a sauce with Chris’ tomatoes.

The tomatoes are so tasty that turning them into sauce is super simple. Pour the whole can into a pan. Add a bit of sea salt and some black pepper. If you like, we have some awesome dried herbs from Daphnis and Chloe in Greece at the Deli, but I go straight up. Add a rind of Parmigiano Reggiano for added flavor if you have one on hand. I add a little extra virgin olive oil and start simmering. If you’re eating like an Italian where saucing is more minimalist and the pasta is the feature, one 28-ounce can will make enough sauce for four people. If you’re going for a lot of sauce, it will easily take care of two good-sized meals. You can simmer the sauce shorter or longer. Shorter (just 5 minutes) leaves more “freshness” in the flavor; longer cooking (20-25 minutes) concentrates the flavors down.

If you’re putting the sauce on pasta, bring a big pot of water to the boil and add a bunch of sea salt—the Portuguese salt I wrote about last week would be wonderful. Put in the pasta of your choice. (If you want to stay with the 1924 theme, Rustichella’s Primo Grano pasta is an effort to recreate the pasta of that same year, and is similarly superb!) Add a few spoonfuls of the pasta cooking water to the sauce—the wheat starch helps slightly thicken the sauce. When the pasta is done, drain and add it to the sauce. Stir well and cook for a couple minutes so the sauce integrates into the wheat pasta. Check for salt and pepper and adjust accordingly. If you want it spicy, add some Marash red pepper flakes. Add a bit more extra virgin olive oil, and stir. Put it into warm bowls, grate on some Parmigiano Reggiano or Pecorino (the Sardinian aged sheep Ricotta Salata at the Deli would be delicious too).

Where to find the tomatoes on the Roadhouse menu.

The Roadhouse has been using the tomatoes in the kitchen for over a year now. They’re regularly in the Salsa Ranchero that gets used with Huevos Rancheros, breakfast tacos, and more. They’re also in the Sunday night Blue Plate special, the New Orleans-style Grillades and Grits (pounded silver dollar-sized pieces of dry aged beef) cooked in a sauce with Bianco DiNapoli tomatoes. This week head chef Bob Bennett used them in a typical Italian American “Sunday gravy”:

The tradition of a tomato sauce that would be started on Sunday morning with lots of scraps of meat left from the week. This would also signify family coming together for an early supper on Sundays after Mass. Ours includes the Bianco DiNapoli tomatoes, ham, leg of lamb, rosemary, thyme, bread crumbs, onions, and fresh herbs. It is stewed for about 8 hours and then served over Rustichella spaghetti and topped with Sar Vecchio Wisconsin parmesan and fresh herbs.

It took Chris and Rob seven years to bring the tomato project to fruition, and it took us a year to figure out how to get them from the West Coast here to Ann Arbor. It was worth the wait! Chris explains what drove him to give so much time and effort to the project:

I really wanted something I could feel good about. Something my kids would feel good about years down the road. It had to have great flavor and transparency. We’d used Italian San Marzano in our restaurants for years, but I wanted to do something here in the U.S. where we could really get to know the farmers. And Rob DiNapoli’s family has been in California for like 7 generations.

Are they really that good? Absolutely. A year ago, the New York Times chose them as the #1 canned tomato available in the country. Many of my friends in the food world are also using them extensively. Karl Worley of Biscuit Love at his new pizza spot, ’za, in Nashville; the folks at the fantastic Cart Driver in Denver; Nancy Silverton at Mozza in L.A., and others are all equally adamant about the excellence of Chris’ incredible canned tomatoes.

the label artwork on the can.

In the spirit of “The Art of Business,” living “one life,” and Emma Goldman’s charge that the way we work needs to be congruent with the ends we want to achieve, the label on the Bianco Napoli is as beautiful as the tomatoes inside. Chris says: “The artwork on the label was done by my father, Leonard Bianco!” (Mr. Bianco senior also once painted a portrait of Jackie and Caroline Kennedy.) The labels are seriously lovely—you might want to buy extra cans just to brighten your kitchen or keep the empty ones to use for pencil holders.

Where to buy these amaZING tomatoes!

You can pick up a couple cans of the Bianco DiNapoli tomatoes at the Cream Top Shop or the Roadhouse. We have both the whole tomatoes and the crushed. Both work beautifully. I’m still super eager for our local tomato season—swing by that Miss Kim Tamchop Farm pop up and grab some heirloom tomato “starts” for your garden. And in the meantime, buy some of these tomatoes, and enjoy them regularly. By the way, Tammie loves them as much as I do. Coming from a passionate tomato farmer like her, that’s quite a compliment!

The Bianco DiNapoli tomatoes are available in the beautiful retail tins at the Cream Top Shop and the Roadhouse.

← Previous: The Pimento Cheese Capital of the Midwest Next: New Season Fried Smelt →