Mussels with ‘Nduja at the Roadhouse 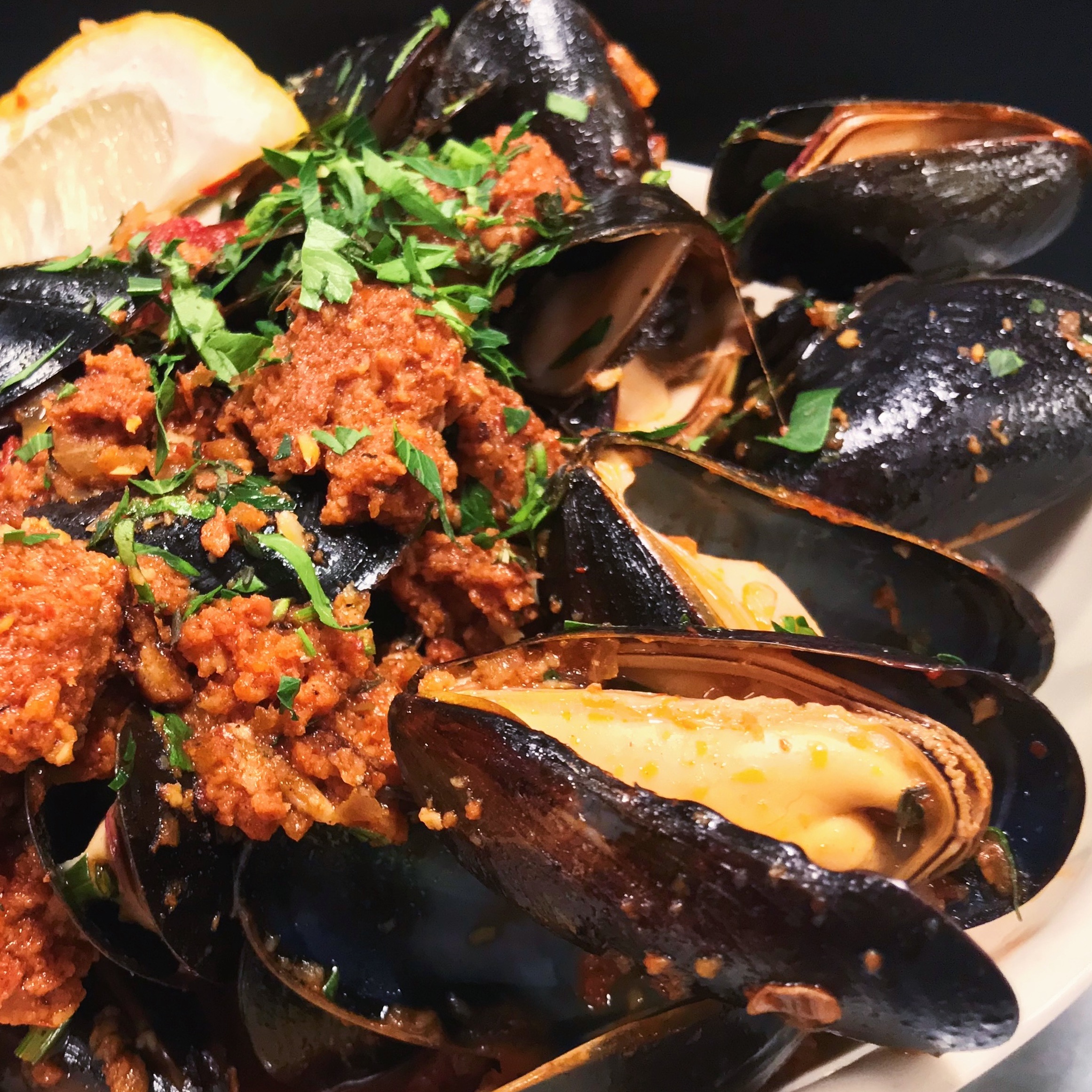 A sensationally superb take on surf and turf!

One of the most loved dishes on the Roadhouse menu for the last few years now is this terrific combo of ’nduja—the amazing spicy, spreadable pork sausage of Calabria—cooked into the broth of fresh Maine Mussels. If you don’t yet know ’nduja, do NOT miss this spicy, slightly sweet, buttery, powerfully porky dish. I loved it when I first tried it, and I love it just as much six years later.

’Nduja is, almost inconceivably, both subtle and strong at the same time. Writing in Serious Eats, Elazar Sontag said, “Try it once, and the flavor of this buttery, spreadable salume is forever committed to memory.”

’Nduja is part of a little-known in the States subset of the Italian salami world called salami dal spalmare, or “spreadable salamis.” They came out of cucina povera, “poor people’s cooking,” as a way for farmers or butchers to use the scraps of pork that weren’t purchased by their customers. ’Nduja is made by finely grinding pork fat and meat, seasoning it with lots of spicy Calabrian chiles, and then aging the paste in a casing. To get clear on the name, it’s pronounced “en-doo-yah.” In Calabria, ’nduja is everyday fare. It shows up everywhere there, but I’ve almost never seen it anywhere else, until our friend, Tony Fiasche of Tempesta Market started to make it in Chicago a few years ago using his Calabrian grandfather’s recipe. It’s nigh on addictive. ’Nduja is nothing short of great on almost anything you add it to. (Secret tip—order it at the Roadhouse on a burger instead of bacon!)

About the Blue Hill Bay Mussels.

So, that’s the “turf.” And the surf? Meaty, Maine mussels! We’ve long used—and loved—the super-premium raft-cultured mussels from the majestically pristine waters of Blue Hill Bay off of Hardwood Island, Maine. This island is located a couple miles west of Acadia National Park, about a 90-minute drive down the coast from Eastport, home to the really good yellow mustard makers at Raye’s. Unlike most modern commercially-grown mussels, the Blue Hill Bay mussels are essentially farmed in “seclusion,” so they aren’t fighting for nutrients and oxygen.

The result is a plumper, meatier mussel that pairs darned nicely with the porkiness of the ’nduja! When the two come together at the Roadhouse, you end up with a bowl of steaming hot, softly spicy seafood. Ask for extra bread to soak up the broth! You can also order them as a main course (that’s my MO) with a nice side of fries to make our local version of the Belgian Moules et Frites. If you have a bit of broth left, take it home with you and use it the next day as a sauce for some pasta (the better the pasta, the better the dish—try it with Martelli maccheroni and top with some toasted bread crumbs before you serve.

← Previous: Miss Kim Bulgogi Burger at the Roadhouse Next: The Pimento Cheese Capital of the Midwest →