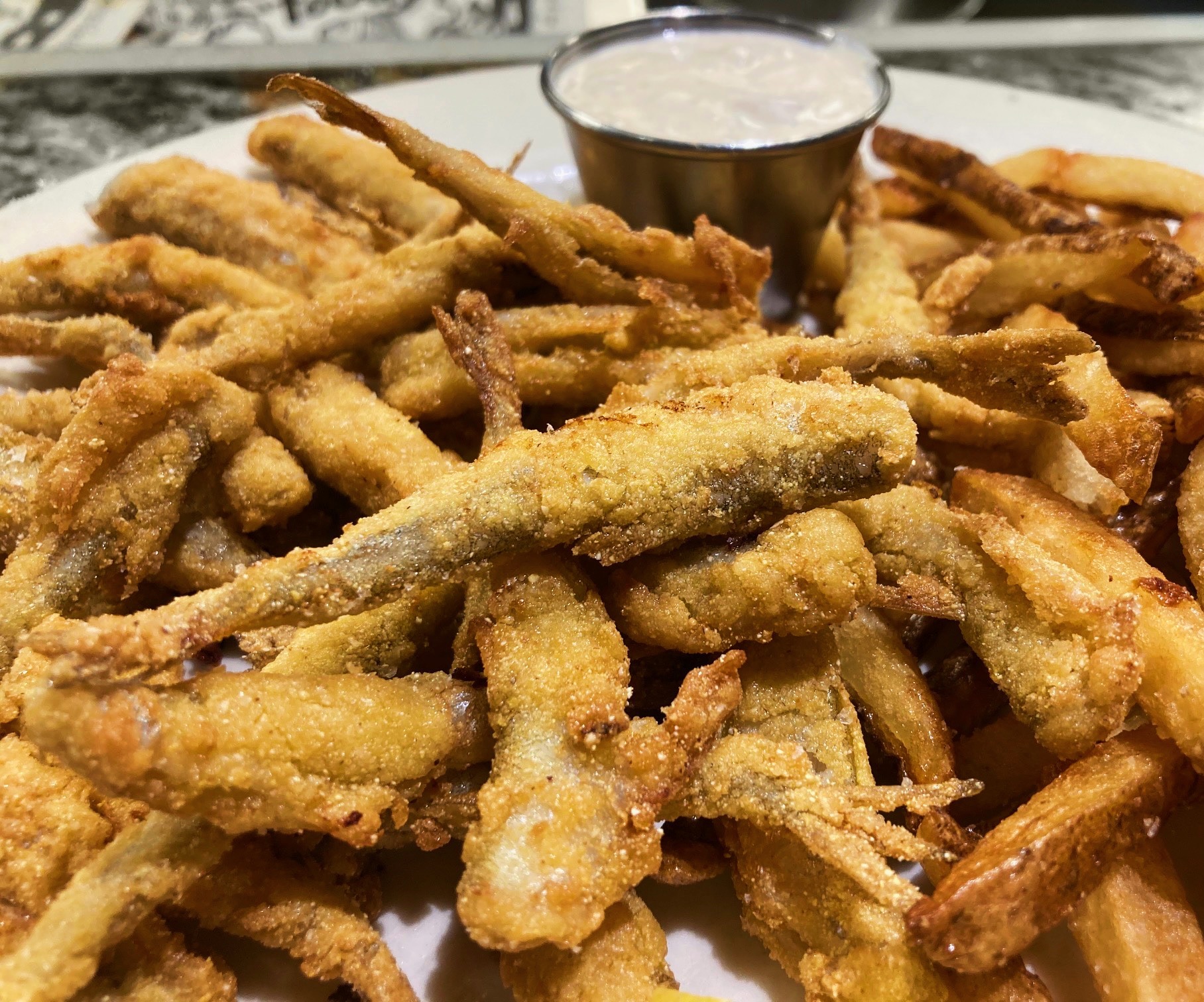 A taste of my childhood shows up at the Roadhouse

When I was young, I had no clue what I wanted to do with my life. I know one thing though—I loved being able to have fried smelt on one of the rare occasions that my family went out to dinner! Which is why I’m so happy that the new season’s smelt showed up—crispy fried and delicious—on the Roadhouse specials last week.

Food was not my passion as a child, nor did I dream of opening a restaurant. Now and then we did eat out, though it wasn’t all that often. Since we kept kosher it had to be some place with fish. When we went out for special events—not holidays, because Jewish holidays always meant home cooking—one of the most frequent spots we’d go was a place in Hammond, Indiana called Phil Smidt’s, on Calumet Avenue. It was only about a 20-minute drive (depending on traffic) from where we lived at 71st and Crandon on the South Shore.

The story behind Phil Smidt and his smelt.

Phil Smidt’s had a bunch of fancy ocean shellfish on the menu—stuff like lobster and shrimp, along with their house feature: frog legs—but we couldn’t even consider that dish since it’s not kosher. The specialty at Phil Smidt’s was lake fish. Perch was probably their biggest seller, as well as—in season—walleye, whitefish, and whiting. One of my favorites was fresh fried smelt. Piled up on a plate with a bunch of fries, it was a darned good dinner. Smelt, for the new spring season, just went onto the specials list for the next few weeks at the Roadhouse. As per the neon sign (which was made by Mark Chalou from early 20th century neon tubes by the way), fried smelt is some really good American food. Kudos to the Roadhouse chefs for getting it on the menu!

Historian Donald Worster writes that, “A human life, like any mountain trail, winds and twists through a very complicated, ever-changing landscape, taking unexpected turns and ending up in unexpected places.” That’s totally true of Phil Smidt, without whom I might not have known this regional specialty. Gayle Faulkner Kosalko wrote right after Phil Smidt’s had closed its doors for the last time:

The story of how Phil Smidt’s began is quite charming. California bound were Phil Smidt and his new wife Marie in 1910. When the train stopped in Roby [Indiana] for water, the Smidt’s got off the train thinking they were already in Chicago where they would switch trains. Well, the train left without them and there they were, in Roby. Making the best of the situation, the Smidt’s, like many other entrepreneurs in the increasingly popular recreation area around Five Points at the turn of the century, opened a restaurant. With a $600 loan, they opened the first Phil Smidt’s fish house. There was seating for twelve, a bar and boat livery. Smidt’s was one of many fish houses to be found there… High atop the wooden framed restaurant was a huge fish with the name Smidt’s, all of which were lit, beckoning new customers.

In the spirit of great things taking a long time to make happen, Phil Smidt’s served fried smelt and its other specialities for 97 years before closing its doors for good in 2007. Makes our 39 years look like a culinary drop in the chronological bucket.

More on the history of smelt.

While I knew that I was happy to see fried smelt on the Roadhouse menu, I really knew nothing about smelt’s history. What I found surprised me! Writer Rebecca Solnit says that deciding where a story begins is like dipping a cup of water in the ocean. If you’d dipped the cup in my childhood, history would say that smelt were a huge part of the Great Lakes fish repertoire. However, had you dipped that same cup half a century earlier, you’d have come up completely empty. Much to my surprise, smelt aren’t native to the Great Lakes. They came from the East Coast to Crystal Lake here in Michigan in 1912 and then started showing up in Lake Michigan on the “shores of Phil Smidt’s” back in 1923, three years after the end of the Spanish flu. They boomed in fresh water and became a big part of the lake catch for fishing boats. They provide a good bit of base food for bigger fish in the lakes, and also a significant source of income for fisherman. Smelt are in the same family as trout and salmon but a whole lot smaller, but are fished at night like anchovies in the Mediterranean.

How popular were smelt in their heyday? Huge! Paul A. Smith wrote in the Milwaukee Journal Sentinel in 2017 about the annual start of smelt season:

In the 1940s, the smelting phenomena was called “smeltmania,” according to an April 28, 1977, article in the Stevens Point Daily Journal. “People came from hundreds of miles to celebrate (the smelts) arrival, and grown men, fully clothed, jumped into the water to catch them with their bare hands,” stated the article. In later years, “sportsmen lined the shores, armed with everything from bedsprings to bird cages” to “scoop up the (fish).” Smelt were so abundant that “some old-timers say that on a quiet night you can actually hear them coming in with a soft, wooshing sound.” Smelting arguably reached its zenith in the 1930s when Oconto and Marinette attracted 20,000 to 30,000 visitors to dances, banquets and parades that stretched three miles, wrote George C. Becker in “Fishes of Wisconsin.” There was even a “smestling” match held in a ring covered with 2 tons of smelt; the wrestlers fought to see who could stuff the most smelt into his opponent’s trunks. The impact of the small, exotic fish was significant at a time when the U.S. was clawing its way out of the Depression. “We’ll never quit,” Kolanowski said. “We’ll never let this tradition die.”

Why you should try the smelt at the Roadhouse.

The Roadhouse smelt are coming fresh right now from nearby Lake Erie. They’re getting a light coating of Anson Mills’ organic cornmeal and are served up—as they were at Phil Smidt’s— with fries and housemade tartar sauce. Come by in the next week or so to grab a plate or two of this super tasty regional specialty and celebrate the start of the annual smelt season here in Southeast Michigan!