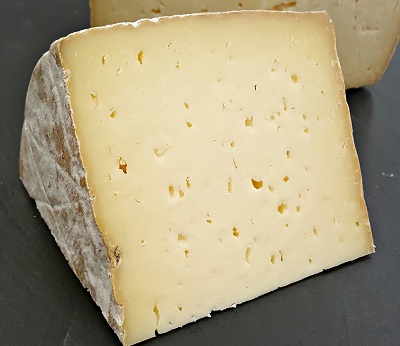 A wonderful role model for “milk’s leap into immortality”.

Writer Clifton Fadiman, quite a radical back in the middle decades of the 20th century, once famously called cheese “milk’s leap toward immortality.” When I eat this delicious, full flavored, creamy, and complex Kentucky Rose from Kenny Mattingly and crew down in south central Kentucky, it immediately calls Clifton Fadiman’s fine quote to mind. In its own quiet, poetic way, this is seriously a cheese for the ages.

How a dairy farmer became a cheese-maker.

Thirty years or so ago, Kenny Mattingly was doing dairy farming in Barren County—down in the southern part of the state, not all that far from Nashville. Although he liked working with the cows, Kenny was concerned about the financial future of his chosen field. While most people would just continue to worry and fret, Kenny chose positive beliefs. He decided to do something about the problem. Rather than stay with the shaky pricing of selling liquid milk to the mass market, he decided to move into what the farm world refers to as “added value”—he figured he’d figure out how to make cheese.

About the Kentucky Rose.

The folks at Kenny’s make a range of fine cheeses, and Kentucky Rose is my favorite! The cheese is named for Kenny’s mother, Mary Rose Mattingly, who passed away two years ago. The crew at Kenny’s say, “Mary Rose Mattingly, our original cheese-maker, marketer, farmers market minivan to Louisville schlepper, and inspiration on many long hard, earlier days when it was difficult to soldier on with our duties on the farm and in the creamery. Her constant reminder that this business is about People and Relationships has become one of our guiding principles.” It makes sense—Mary Rose was a Child Development Specialist with Head Start.

Kentucky Rose is a raw milk semi-firm cheese that brings out the nuances of all the great milk from the farm’s herd. Creamy on the palate, it’s almost floral in its aromatics, and it’s got just the right bit of salinity. Kentucky Rose is the kind of cheese that almost everyone likes—I can imagine kids loving it and cheese connoisseurs appreciating its complexity. It pairs really well with the season’s peaches, or really any fruit. That said, it’s just as much at home with ham; it would make a happy match with some of the country ham we get from Nancy Newsom in Princeton, Kentucky. It would be great on a sandwich with lettuce, tomato, and bacon fat mayonnaise. Melt it on potatoes or put some on a salad. Kentucky Rose is really tasty with the Bakehouse’s Sourdough, too. It pairs particularly well with wheat beers or ales, which we have plenty of at the Roadhouse. You can order it on our cheese boards along with some balsamic-roasted grapes, or by the ounce to take home!

← Previous: Pit-smoked Pork BBQ at the Roadhouse Next: Meet the Growers of Westside Farmers' market →