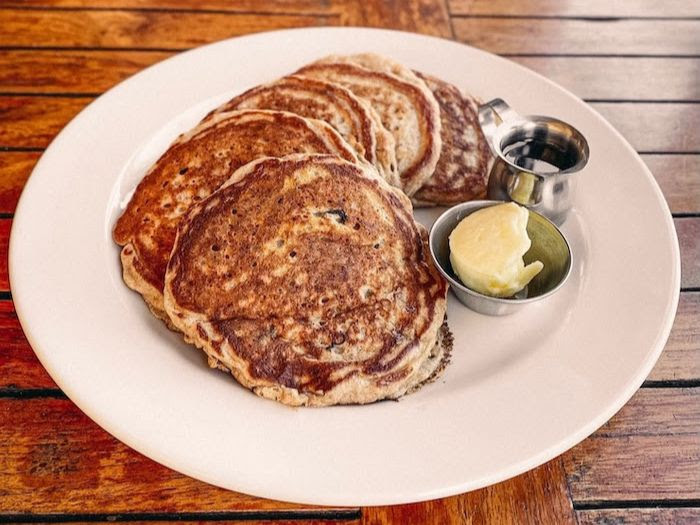 Made with freshly milled flour from the Bakehouse—a delicious new upgrade to the daily breakfast menu.

In spring of 2022, we shifted the pancakes at the Roadhouse from commercial white wheat flour to the spelt we were milling every week at the Bakehouse. As with all changes, I was anxious about how this one would be received. Much to my delight, the pancakes have been pretty much a home run! Nearly everyone I’ve talked to loves them. In the process, we turned a product that was perfectly fine into something really special, something customers are coming in specifically to order.

Spelt is an ancient grain that’s in the same family as wheat. Greek mythology has it that it was a gift from the goddess Demeter. Spelt has been grown in central Asia for over 9000 years now and came to North America only at the end of the 19th century. Its flavor is bigger and nuttier and quite terrific, but low yields have held back its popularity in the high-yield-centric 20th century.  The good news is that since modern industrial plant breeders took a pass on it, it’s been left more genetically intact than most modern wheats would be. That’s a wonderful thing for us—since we start with flavor, spelt is a big winner in our book! The folks at the Bakehouse say:

Our organic spelt berries come from Michigan and the surrounding Midwest region. When we mill them on our stone mill, it produces a beautiful cream-colored silky flour with large flakes of nutritious bran. Compared to whole wheat flour, it’s softer, not as absorbent, and produces a very extensible dough.

We’ve taken action to raise the bar even further on a sister product—the Roadhouse’s Chocolate Chip Pancakes. Up until last week, they’d generally been something of a side note, ordered probably mostly by kids. That’s about to change. We’re now using the bean-to-bar Nicaraguan chocolate we get from our friends at French Broad Chocolate in Asheville. The chocolate is darker, less sweet, more complex, a better finish, and it fits wonderfully with the spelt.

The Chocolate Chip Spelt Pancakes are exceptional; so tasty that, to be honest, maple syrup seems unnecessary. I really don’t eat breakfast but I couldn’t resist eating one of these the other day. One bite and I was hooked. My forecast? In five or six years these will have become a signature item at the Roadhouse! Swing by soon so you can be one of the first to try them!

← Previous: A Salute to Really Wild Wild Rice Next: Fresh Mullet at the Roadhouse →