Reezy Peezy at the Roadhouse 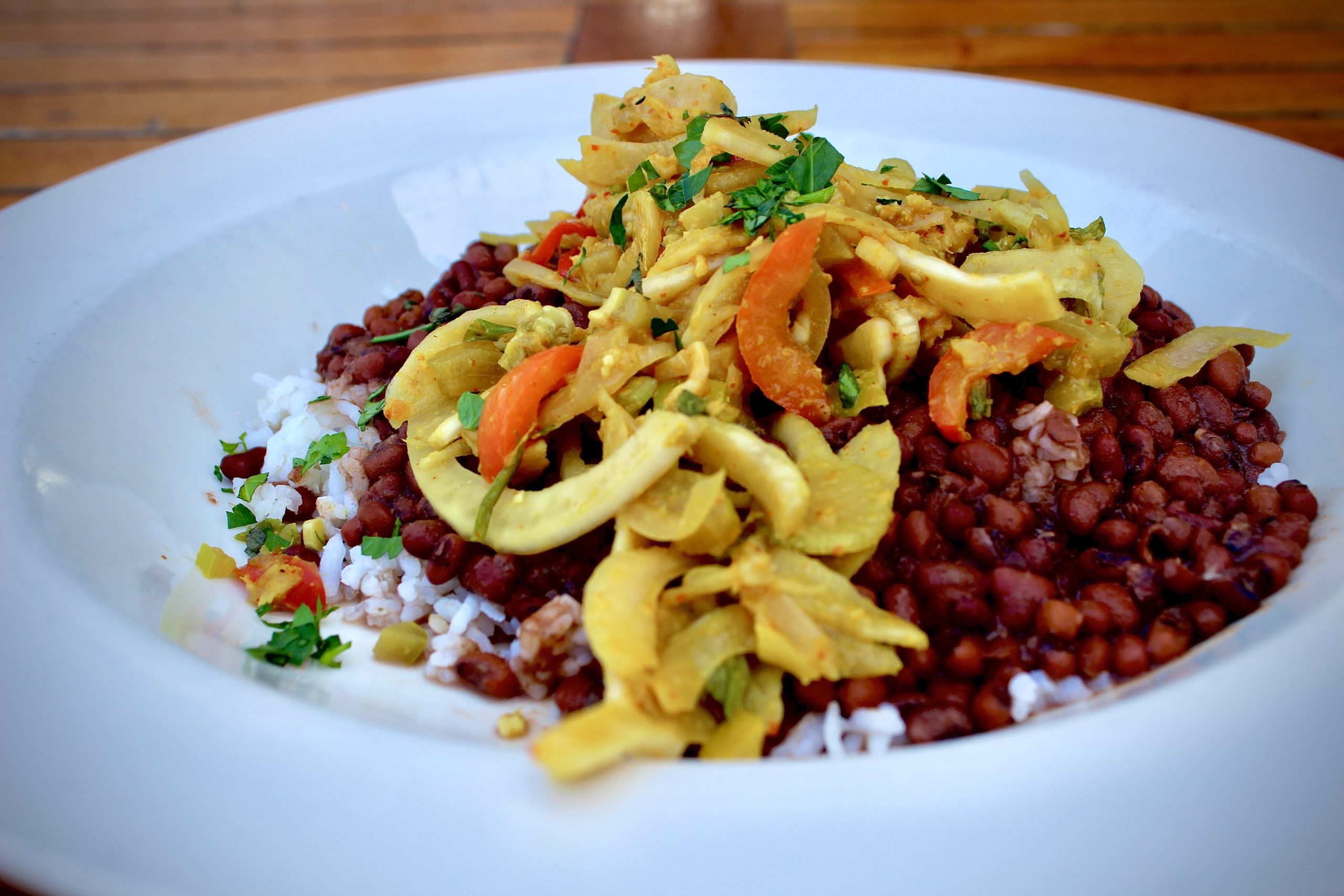 This dish is a wonderful example of a long-standing legacy of flavor, biodiversity, farming tradition, good cooking, the African contribution to American cuisine, and tasty eating in action. The history of the dish goes back centuries, but it is only possible for us to eat it today—and tomorrow, and probably for many years to come—because of the forward-thinking work of Glenn Roberts of Anson Mills. Suffice it to say that he has dedicated the last two decades to working to restore and revive the growing of traditional grain varieties. All of Glenn’s good work is done in ways that honor history and tradition, working hard to get grains that were either almost gone, or had completely disappeared from daily life, back into regular circulation.

A big part of Anson Mills’ business is selling its amazing products to people like us to cook with. The other half of its work is to give away seeds. You read that right—Anson Mills makes it a practice to give seeds from any of the varieties they work with to anyone who they feel will do the work to grow them on their farm. It’s not a quick route to financial success, but it’s a great way to contribute meaningfully to a future world in which full flavor and biodiversity can play prominent parts.

About the Sea Island Red Peas

While “red peas” may sound simple if judged by name alone, they actually have a big history and an equally big flavor. Sea Island Red Peas are one of the many quiet contributions of the African continent to what has become “American cooking.” Along with their genetic cousins, the Black Eyed Pea, what we know as Sea Island Red Peas were likely discreetly hidden away (with rice and other seeds) in the hopes that they could be later planted for food after the horrors of the ocean journey from West Africa to the Americas. Their roots—literally and culturally—were likely with the Mende people from the part of West Africa that today is known as Sierra Leone. Cultivation in the Americas likely began in the 17th century in the early years of enslavement.

Why the peas and rice are so good!

When it comes to eating, the Sea Island Red Peas are remarkable. I’ve never really tasted anything like them; meaty, almost smoky, and creamy on the tongue. In this dish, they are paired, as per tradition, with the equally amazing Carolina Gold Rice that we also get from Glenn and his team. The folks at Anson Mills share:

The pairing with the rice, as per what the Anson Mills folks wrote above, goes back centuries. Gullah chef BJ Dennis says,

It became one of those dishes that not only was significant to us in the Gullah Geechee community, but it became a part of the Southern vernacular of foodways. It kind of tells me, personally, how much influence we truly have on Southern foodways and traditions. Even though they may have not given us that credit in the mainstream up until recently, these things were part of our heritage that became part of Southern culture in general.

In that sense, serving the dish in this way is one more small step in the effort to honor this sort of work that’s also portrayed in Patrick-Earl Barnes’ beautiful art piece, “Blacks in Culinary” (hanging in the room off to the right at the Roadhouse). There are centuries of hard work done by Black chefs, cooks, and food writers whose legacy has so often gone unacknowledged by mainstream historians. This dish is one way to give credit where credit is rightly due, to help rebalance that painful reality and write the history—and the future—in a more honest, more accurate, and more inclusive way. (We have the amazing t-shirts made with the artwork of one panel of Patrick-Earl’s piece. Margins from the sale go to the African American Cultural and History Museum of Washtenaw County.)

The Sea Island Red Peas are honored today on the Slow Food Ark of Taste, which reports that:

The only version of Reezy Peezy remaining in the Carolina Lowcountry today is still cooked with Sea Island Red Peas in very traditional rural households on the Sea Islands and almost nowhere else in the Carolinas. Reezy Peezy is an extraordinary dish of high and low flavor and texture characteristics and falls into the broad world category of legume pilafs with startling local identity.

These remarkable foods inscribe comforting and lasting palate impressions on any who are fortunate enough to taste them. … Sea Island Red Pea production was abandoned along with rice during the Depression, but collections of feral peas and a few stalwart gardeners and seedsmen saved them from extinction and make possible the rare enjoyment of these foods today. … fewer than 100 acres (most by, or supported by, Anson Mills) are planted to Sea Island Peas in rice rotations.

The finished dish is delicious. The Roadhouse crew is serving it with a super fine fennel slaw. Although the Reezy Peezy is vegan as it is on the menu, it’s great with some grilled wild-caught North Carolina shrimp (or have ’em blackened) or salmon. You can also order the Sea Island Red Peas as a side dish or appetizer, or sub them out for one of the sides that typically comes with another dish. I like a good bit of Tabasco sprinkled over top too.