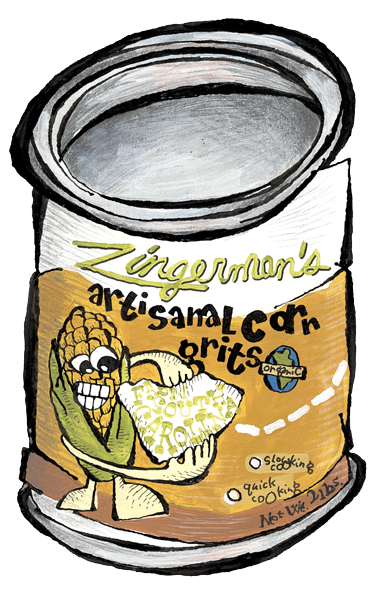 Like white bread, grits are – in name – anything but lost. Although in our part of the world they’re not headline material, in the South they’re about as much of a supermarket and diner staple as you’re going to get. What’s been lost is the flavor, the essence of what the taste of good grits is all about. Thanks to the driving work of Glenn Roberts at Anson Mills, we’ve been able to get great grits here in Ann Arbor.

Anson Mills grits have become one of the signature dishes at the Roadhouse, a regular breakfast at the Deli and big Mail Order item too. What makes ’em so special? I could go at length but here’s a quick version.

Although I wasn’t there, I’m guessing this is what grits tasted like before modernization got going and took the heart and soul out of ’em and left us with the long life, low flavor, mass market industrial product that most Americans now think of. These, however, are what grits should be all about. In terms of eating it’s simple – when you taste these grits they taste like corn. Which seems sort of a stupid statement to make until you taste some of the supermarket version of grits and discover that they really don’t taste of anything at all unless you add something to them to flavor them. But the point of grits is the corn! That’s what they are!

For starters there’s the corn (imagine that?!) The grits are made primarily from a 19th century variety that Glenn has got growing again called Carolina Gourdseed. It’s an old variety that’s exceptionally flavorful. Glenn found the Carolina Gourdseed growing in a field near Dillon, SC. It turns out that it was a variety that was bred to stay in the fields until late fall (no early harvest) when it would be fully ripe. The corn would be left in the field to dry, and then, as the weather got colder, to stay there under the winter snows and frosts until it was brought in, a bit at a time, to be milled. It’s Glenn’s belief – and I have no reason to doubt it – that this centuries-old milling work was in essence the cold milling that he’s now revived. If it tastes so great, why did people stop growing corn like this?

In general, these heirloom varieties yield about 1/4 to 1/3 of what commercial corn now yields. They’re also riskier to grow. These old-style corns were bred to ripen on the stalk, not in a silo. That’s good news for us flavor-lovers but not for those who want to play it safe in their growing. What we’re getting when we get Anson Mills corn is never taken from the stalk until it’s fully ripe – that means more flavor in every kernel of corn, just as you’d get with properly tree-ripened produce in the summer. Most corn now used for milling into grits (or cornmeal or whatever) is picked young and in order to decrease the risk of loss from weather. Between yield and risk of loss in the field, the cost of producing these corns is about 4-12 times what it costs to produce commercial corn for grinding!

Everything you’ve come to love about great, fresh, properly raised traditional produce at the Farmer’s Market is true with great grits too – great grits are a perishable, fresh product. We’re fortunate to have them!

Today, there are maybe a dozen mills doing anything resembling old style grits milling in the whole country. In 1800, there were 40 mills per county in the Carolinas. Corn ground for grits – although dried in the field – was still “alive” and could still be used as seed corn because its enzymes are still intact. It also means that it’s much, much more flavorful.

By contrast all the commercial milling today has shifted to steaming the corn to get the hulls off, to having the germ taken out (and in the process, most all of the flavor), then milling at ambient temperature with steel roller mills and then packing and setting into the distribution chain for a few years before being cooked up to the rather tasteless paste that most people nowadays associate with grits.

At Anson Mills, everything in the milling process is done to keep temperatures down and in the process protect the flavor of the corn. First, all the dried corn is taken down to -10F before milling. Second, the entire mill room and the stones are kept at 55F. That means that the corn during the milling stays very cool – never gets above 58F. Also, Anson’s grits are milled very coarse by modern standards, then sifted into four different sized particles (aka “fractions”). The different particle sizes are then blended to get the right ratio of coarseness and fineness that creates a great eating experience. The long cooking grits are probably the coarsest in the US.

We’ve been selling and serving Anson Mills grits for a few years now, and I’ve loved them from day one. But the more I learn about them (and all the other products the mill produces) the more I’m into them. We get both a quicker cooking (relatively finer-textured) grits and a longer cooking grits. The quick cooking can be ready in 20 to 30 minutes (though longer cooking will be even better still and result in a creamier bowl of grits). The coarser, long-cooking grits should go for 1-2 hours. The long cooking are much coarser and truly delicious, if you have the stove time. (If you cook them covered on low heat you really don’t have to stir all that much and they’re delicious!).