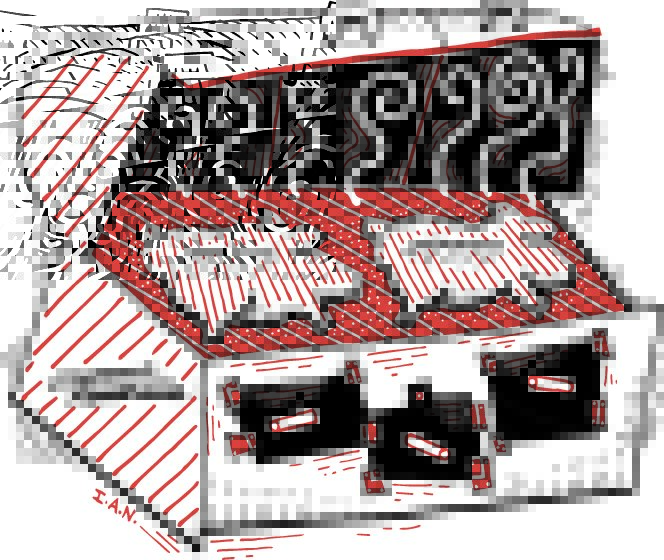 Ah The Joys of Pork, circumcision notwithstanding;
Our inheritance of dread from Adam notwithstanding;
I sit alone in post-prandial bliss in Zingerman’s Roadhouse.
(Whoever is not guilty—complicit in his or her comfort
Of daily immoral acts in these end times—cast the first stone.
Even Nestle’s (“. . . the very best chaw-clate”) beans
Are harvested by child slaves in Ivory Coast.) But,
Postmodern in its social responsibility toward fine eating (accept killing)
12-dollar-mac-and-cheese-Zingerman’s Roadhouse with their philosophy
Of excellence at any cost has won me over—
At some expense. Oy! They roast the whole pig slowly, slowly,
Slowly on a spit, on site in a big roaster. Then, do they soak it (no one knows)
In special juices of papaya, peppers, cardamom and clove
Such as to make the un-embodied angels weep from jealousy?
The west wind’s aroma wafts among the strip malls
Up and down Stadium, past the Yoga Center and
The Castle beer, wine, and cigar store and Nicola’s bookstore
Pulled muscle, I say, stripped from the bone
Of some smart oinker raised to die for our (double) chins.
And in full awareness of my sins I confess
(With two Coont Ales having passed through the splanchnics
Now soaking my frontal brain with froth)
This is the best foinkin’ pulled pork sandwich
In the best big-assed pork soaked sesame seed Kaiser roll
With the best ministered-with-mayo-anointed-in-apple-cider-vinegar-
&-shrived-in-yellow-mustard coleslaw
Exactly matched to the savory tang of pulled pork such that
If the Buddha ate meat he’d eat Zingerman’s pulled pork sandwich.

How much of our day is spent in longing
Expecting, anticipating, measuring, waiting for
Our desire to match our expectations? Better even than
the first drag on a Camel after months of failed abstinence
This sandwich fit sire in sow. More than just a met desire,
This alchemy was like some Gnostic recipe for seeing G-d and
I dwelled in Thy House as I savored and sucked swine
With my eyes closed meditating; and chewed it to an essence
And pouched it in my cheek like the strike of a slow curve ball
In the catcher’s mitt that ends the World Series
Played over and over again and again in slow motion
And recorded at home on DVD for posterity forever and ever.