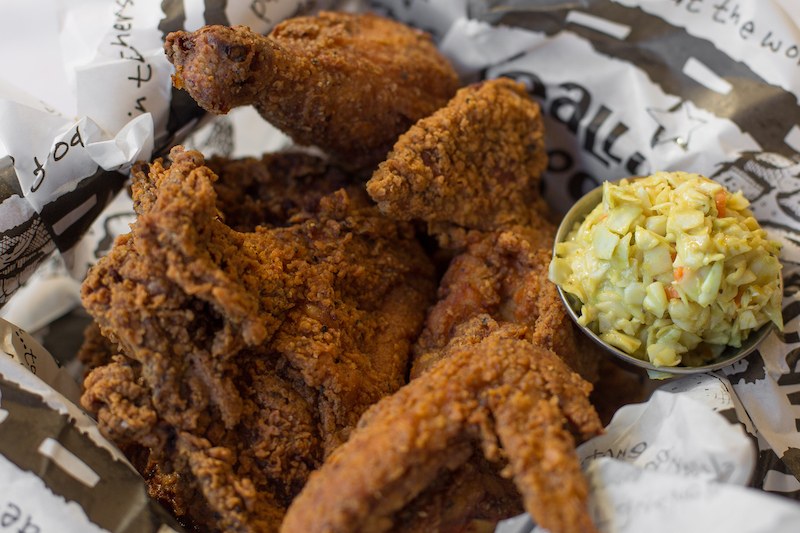 Roadhouse Fried Chicken: An Icon in the Making 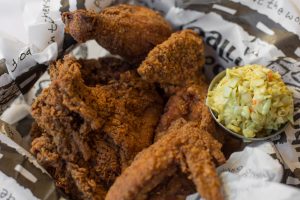 We’ve been making fried chicken at the Roadhouse since day one. As famed food writer John T. Edge points out, “Fried chicken is at once a totem of tradition and a lowest-common-denominator lunch.” Though a lot of folks grew up with the stuff, unfortunately, even among the lucky few who have a great recipe passed down through their family, these days not many people are able to put in the time to make it. So, we set out to make something that both recalls great childhood memories for a lot of people but takes that taste to a whole new level.

You Can’t Call It A Roadhouse If You Don’t Serve Fried Chicken
Elizabeth Mericas noted in her Ann Arbor Observer review of the restaurant that “a Roadhouse menu is incomplete without fried chicken. Zingerman’s is what everyone strives for but few achieve.” That’s not the first time we’ve seen people say nice things about the chicken but it wasn’t what was sending an unprecedented number of fried chicken orders out to tables one Friday evening this past summer. We’d had so many orders for fried chicken at the same time that the fry station in the kitchen had gotten a little behind. The crew was kind of caught up wondering what it was that was making the fried chicken so “suddenly” popular. “Were we written up in some article or something?” someone asked. “Yeah,” another added, “It’s like every table I walk up to, one of the guests is already telling one of the others that they need to try to the fried chicken.”

The Beginning of the Buzz
I realized almost immediately what was going on. There hadn’t been any article at all, at least not about the fried chicken. They were experiencing the way that something becomes “iconic” around our community. We start with something that’s pretty good, a recipe or an ingredient that’s got substance, real roots in the area in which it originated, some history. We then get really good ingredients to give it a lot more flavor than it’d normally have and work on tweaking that recipe, constantly trying to improve it, over and over and over again. People eat it, they like it, they try something seemingly similar somewhere else, which they slowly realize they don’t like as much. They come back to eat our version again and, if we do our work well, they like it. And then they eat it again and their (and our) reality is confirmed. It’s really good. They tell a friend, who tells another friend.

So, Where Did We Get OUR Recipe
The credit for our inspiration for the Roadhouse fried chicken goes to Gus’s World Famous Fried Chicken in Mason, Tennessee, about 45 minutes east of Memphis. It’s not like there’s anything particularly fancy about Gus’s, or about the chicken they make-it’s just really great. The place itself is pretty run down. Just a counter you order at in the back and some old tables. They make what fried chicken freaks know as a Tennessee-style-the raw chicken goes into a milk marinade, then gets tossed in flour, then fried. Not fancy. Just good. Really good. Kind of spicy. Crunchy outside. Moist and hot inside.

Don’t Take Our Word For It
Now that the fried chicken buzz is going, we’re hearing from some of the folks who come back again and again. Annmarie Rubin of Ann Arbor is one. She’s a very smart and very nice woman who, having worked for many years in the food business, has a pretty discerning palate and a willingness to share her views on where we’re doing well or not so well in our work. “The first thing that is so amazing about the fried chicken,” she wrote to me, “is how crisp-but light-it is on the outside. It has that whole crisp and crunchy and light thing going on outside, and when you cut into that delicious crisp light and juicy top layer to get to the perfectly cooked meat underneath. The meat itself is so juicy-piping hot-it is perfectly preserved inside there during the frying process. The seasoning isn’t something you notice-it’s there to enhance the food, not cover it up or bury it. It is subtle-behind the scenes bringing out the full flavor. I could pretty much go on all night about it…”

The Future of Fried Chicken in Ann Arbor
So there you go. A dish that’s got roots, one that’s been hopefully elevated to a very high level of flavor, and one that’s got a really solid future here in town. The September Observer took up the subject of the Roadhouse again and this time proclaimed the Fried Chicken the best in town. If you’re near Memphis, make the trip to Gus’s. But if you’re out our way, I hope you’ll stop by and have some of this one.

← Previous: Apalachicola Oysters Next: A Practical Guide to Eating Oysters →