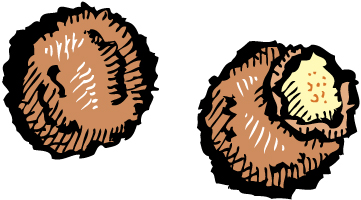 this item is currently on vacation

“Dig daddy, its a natural fact,
It’s sweepin’ the South, that thing they call the Bacon Fat!” 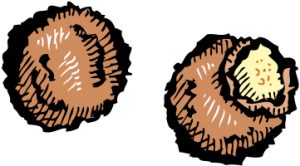 I hate to admit it, but you know how certain really stupid commercials sometimes stick in your head to the point where, like ten years later, you still have them embedded in your brain and there’s just no getting them out? Maybe it’s just me but . . . there was that commercial for some dog thing ages ago that had the dog going crazy over bacon. The slogan was something like “Dogs loooove bacon!!!!” . . . . Anyways having had that stuck in my head for a decade (or more probably) I feel like I can finally use what’s in there. So here you go—dogs—in this case it’s actually puppies—LOOOOVE bacon!

Which is my weird way of getting at the fact that as of this week we’re now able to take a step up on the flavor scale at the Roadhouse by offering up the Maize ‘n’ Blue Hush Puppies with a little bit of warm bacon fat on the side to pour over top. After all, as the good Mr. Latimer likes to regularly remind us, “everything is better with bacon.” And hush puppies are no exception.

Backing up slightly, the fact that we make hush puppies is hardly new. They’ve been on the menu I think since day one. That they’ve been particularly good of late is a tribute to the quality of the cornmeal coming in from Anson Mills and to the ever-improving skills of the fry cooks at the RH. One woman stopped me at the chef’s counter not long ago to tell me that she grew up in the South and these were the best hush puppies she’d ever had. “I wish my mother were here to try ‘em. “ ((It sounds almost too corny to share but she really did say it so . . . . .)

Having just been back down South I’m reminded of how . . .well, how the average hush puppy in the world, while conceptually loveable, really isn’t all that tasty. I mean, like all fried food, there’s probably something people like about any hush puppy just because it’s fried and kind of crunchy on the outside, soft on the inside. But the truth is that, like most grits you get served, the average hush puppies are made from not pretty poor (ok, almost flavorless) cornmeal, and all too often they’re overloaded with other stuff (like sugar) to masks the lack of flavor in the corn.

By contrast, hush puppies around here start out with exceptionally good cornmeal from Anson Mills in South Carolina (the same folks from whom we get our amazing stone ground organic grits and organic Carolina Gold rice as well). As you might probably know, they raise the old varieties of corn (low yield, high flavor), field dry it (as opposed to the far faster machine drying) to protect its natural flavors, then stone grind at low temperatures. They leave the germ in (the oil is where much of the flavor is). You know the story—the yields are radically lower; the flavor is radically better.

The story of hush puppies of course is that people used to pull bits of dough off the cornbread they were making and toss ‘em to the dogs to keep ‘em quiet, hence the name. Either way they’re a southern tradition of great proportion. More in the moment, one friend of mine who spent a lot of time in the South told me, “I love hush puppies. They’re comforty, they’re fried and they taste good and they taste like what you make in big old Southern kitchens.” Even more to the point I just heard Southern food writer Brooks Hamaker say that, “hush puppies are really just fried corn bread,” which makes perfect sense but I never thought of it.

As you also probably know we have the hush puppies here in two “flavors”—yellow and blue. Aside from the fact that both are very old and very traditional colors of corn, how could we pass up the maize and blue reference here in Ann Arbor? For more on the amazing yellow cornmeal we’re getting from Anson see 5 Foods from August 28, 2007, and read the piece on cornmeal mush. Same corn, same great flavor. (And mush is also very good with bacon fat.)

You probably know less about the blue corn. It’s an old variety Glenn has grown that’s known as Cherokee Native Blue. It’s got a really nutty, and slightly sweet, slightly floral quality to it. (No, it’s not as one customer asked me, “flavored with blueberries.”) I haven’t seen it for myself but Glenn from Anson Mills, who knows more obscure historically-rooted food trivia than even I do, said that, “buffalo will still walk over any other corn to get to blue.”

The Cherokee Native Blue is a very late harvest corn (about two to three weeks later than any other corn), which adds to cost, reduces yield, and increases flavor. Glenn notes: “The plants are very slow growing and this particular blue does not row up like most corns in its class, but rather has a more random kernel pattern. It also is very late, meaning it is still drying down when other maize is dry and harvested. This is due to its high flint characteristics matched with its high protein and nutrition.”

All technical and historical elements aside, the key points here are that the cornmeal itself tastes great. And that blended into batter, deep-fried ‘til golden brown and then served with homemade hot sauce and a spicy mayonnaise they’re a pretty tasty way to start your meal. And since blue corn is as old—or even older—than yellow, it was too hard to pass up the possibility of serving a basket of Maize ‘n’ Blue hush puppies here in Ann Arbor.

So . . . that’s all the background and it’s all good and it’s all historically of interest. BUT all that aside, what’s really got me thinking about hush puppies is BACON FAT. The kind you eat. The story here is that a couple from South Carolina were in to eat with their son and his girlfriend, both of whom go to U of M. The whole family loved their meal, which included a number of southern and other(‘n?) things off the menu. The father in particular was very complimentary, a very nice, very down to earth guy with a really, really good, strong, South Carolina accent. Really the whole group was very nice. The son was a vegetarian.

Anyways, at the end of the evening, the father asked if I wanted one piece of advice. “Of course!” I answered without hesitation (I’d have said it anyways but he was a nice guy so . . .) “Your hush puppies are really good,” he said in South Carolinian. “But you’re missing one thing in ‘em that would really put ‘em over the top.” OK, I like that kind of advice. “Pray tell?” I inquired. He smiled sort of mischievously and said, “You need to put a little bacon fat in ‘em.” Made sense—everything’s better with bacon. I thanked him, thought about it for a minute. ”Good idea but . . ., “ looking at his son, I said, “the vegetarians’ll kill us!” The son didn’t say anything but the father just looked at me, rolled his eyes, smiled, shook his head and said as if were one of the most obvious things in the world, “Just don’t tell ‘em!!”

Good story, bad advice. But . . . what Alex and I quickly realized we could do was just offer hot bacon fat on the side. Coffee can come with cream, French fries with ketchup, and oysters with cocktail sauce, so why not hush puppies with bacon fat. It really is good. So next time you’re in order up a little bit of bacon fat with your hushpuppies. Or if you’re working be sure to ask your customers if they’d like some on the side.

OK, so that alone was good. But the bacon fat thing went over the top when I discovered Bacon Fat the song. Darin, you probably already knew this, but I didn’t. There is a song—not just any song, but actually a big hit from 1956 called, . . . you got it, “Bacon Fat.” It was recorded by Andre Williams, of whom Lux Interior once wrote, “. . . [he] makes Little Richard look like Pat Boone”

I’ve got the CD and it really is a great song. Starts with a low sax solo. Drums come up with back up singers doing a little “wop, wop” thing. Andre Williams starts out in what I suppose at the time was a pretty innovative, talk-over-the-music “singing” that most people at the time probably said would “never work.” Anyways, pardon my less than perfect transcription of the lyrics (which of course sound way better if you get em paired up with the music . . . ), but it goes kind of like this . . . .

If you go to http://www.intheredrecords.com/pages/andre.html
You can get a good look at André in a rather regal pose . . .