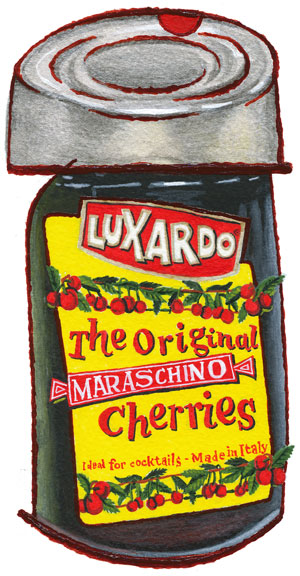 If you think about it for more than 15 seconds, you’re going to quickly come to the conclusion that the super-processed, red-dye-number-whatever, cute little maraschino cherries that we all grew up with cannot possibly have been the original item. Just as cream cheese didn’t start out in foil packages with a one-year shelf life and a lot of stabilizer, so too there’s more to maraschino cherries than what they put into the cans of fruit cocktail.

So what were the original maraschino cherries? Quite simply, they were cherries that were macerated in maraschino liqueur. At one time, maraschino liqueur was more popular than cointreau. The marasca cherry, or in Latin, prunus cerasus marasca, grows typically on the coast of the Adriatic Sea, especially on the Dalmatian coast. It’s a pretty tart, dark red fruit that gives maraschino liqueur its unique flavor. So we’re starting with tart cherries, and then putting them into the very highly-rated Luxardo maraschino liqueur which has been made in Italy since the 19th century. Yes, the difference is beyond night and day. Bacon to Bacos.

Credit for creating maraschino goes to a Genovese by the name of Girolamo Luxardo, who was living in Zara on the Dalmatian Coast where he became familiar with the local cherry. His wife, Maria Canevari, began using the cherry to make liqueurs at home (as was customary at the time) and after her “rosolio maraschino” gained a reputation among serious connoisseurs, Girolamo opened a distillery in 1821.

After World War II, the Luxardo family relocated to the Veneto region of Italy. Today they have about 22,000 cherry trees, in the hills between Padua and Venice. The fruit is all hand-picked, crushed, fermented and then distilled in pot stills. The new liqueur is aged for two years in Finnish ash vats. There are some other maraschino liqueurs out there but they’re pretty much all copies of the Luxardo original and not anywhere near as good.

The liqueur on its own is very thick and full-bodied, and very complexly flavored. You can’t miss that it’s made from cherries; big and rich with a purity of flavor that hints subtly of cinnamon. It’s got a long, strong finish, as do the cherries that we macerate in it. I think every single person that’s sampled them has loved the flavor!

So with all this about the real thing, you might be wondering just what happened to maraschino cherries that changed them so drastically. Well, it seems that back in the 1920’s, one Ernest H. Wiegand, a horticultural professor at Oregon State University, developed a method for preserving cherries that was based on brine not alcohol. And in the process, the “modern,”-or what I think would more fairly be called “faux”-maraschino was first manufactured. (If you’re really interested, Oregon State still offers a course devoted to the technological and scientific aspects of maraschino cherry production.)

To compound the problem, the formal American definition was changed in 1940 when the FDA determined that, “A maraschino cherry is a cherry that has been macerated in a flavored sugar syrup, and then dyed. Red maraschino cherries are usually almond-flavored, while green are mint-flavored.”

A small thing at first glance, our shift back to making REAL maraschino cherries at the Roadhouse is something significant. Even today, Epicurious says on its website, “At one time they were traditionally flavored with Maraschino liqueur though such an extravagance is now rare.” They’re a meaningful flavor addition to the Classic Cocktail line at the Roadhouse. Think about what it means to put those super-processed ones into your cocktail-it’d be like putting American singles on a Niman Ranch burger. And, in the bigger scheme of food life, it’s a move that’s as meaningful as baking great bread, growing good produce locally, eating good olive oil, etc.

As part of our effort to take back our language around food, I think we can safely and clearly differentiate these cherries verbally as well as in flavor simply by pronouncing the name as it should be pronounced in Italian, “mar-ahs-kee-no,” instead of the Americanized “mar-ah-shee-no.” We do, by the way, still have the old-style ones for kids and for nostalgic adults. The real maraschinos aren’t for kids, but they are really good.