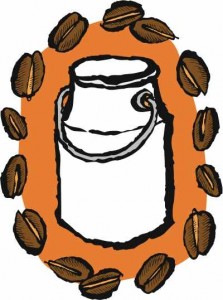 The Official Drink of Road Island

Trivia nut? The Rhode Island Coffee Milk is the official drink of Rhode Island. Fan of flavor? This sweet treat packs a great taste. Armchair historian? You’ll learn coffee milk was invented by the uncle of Ann Arbor’s own Jan Longone, the woman behind the world class culinary collection housed at the Clements Library.

Coffee milk officially became the state drink of Rhode Island in 1993, but it’s been around since the 1930s. While it’s unlikely that no one other than Rhode Islanders have mixed cold milk, coffee and sugar, for whatever reasons the good people of the nation’s smallest state have latched on to it with a love and affection that English people have for tea. The first coffee syrup available for retail sale was a brand called Eclipse, which debuted in 1938 and became known for the slogan, “You’ll smack your lips when it’s Eclipse.”

The story behind the official story came up when I met with Jan to prepare for the Symposium. I mentioned when folks arrived at the Roadhouse for Sunday brunch, we could start them with a taste of Rhode Island coffee milk and a bit of background on this piece of American culinary history. Jan immediately lit up and said, “You know, my uncle actually invented that.” I have no reason to doubt that he did. As a very careful and detail-oriented historian, Jan doesn’t spin stories out of hand. She closed her eyes, and said, “I can still taste it.” Jan’s Uncle Meyer was a Russian Jewish immigrant who loved to tinker with things. He seemingly took the Rhode Island love for strong, sweet coffee and turned it into a cold drink. We don’t know his exact recipe for the coffee syrup which is the basis of the drink. But apparently he shared it with someone in the interest of getting it produced and patented and the man, whose name we no longer know, absconded with it instead. Uncle Meyer was left to tinker with other things, Rhode Island got coffee milk and here we are all in Ann Arbor today, home to his niece and her world-renowned culinary collection at the Clements Library. And now, here we are, more than likely the most western stronghold of Rhode Island coffee milk.

Bee Mayhew, former Roadshow manager, is the one who had the great idea to get this old East Coast classic going here. Bee’s also the one who noted that really good coffee milk is what the Frappuccino now sold in every gas station should probably be about. She’s spent months testing and tasting different versions of homemade coffee syrup (despite the cute slogan above, the commercial versions are loaded with stuff that doesn’t need to be in there) using the Roadhouse Joe from Zingerman’s Coffee Company as the base. We mix the syrup with milk and cream from Calder Dairy (over in Carleton, same stuff we use at the Creamery to make the cream cheese).

When do you drink coffee milk?

Anytime and anyplace. If you’re not into hot beverages, it’s a great way to get the day going. Excellent opportunity to cool off in the summer heat. Be a good way to end a meal along with Chocolate Chunk Cookie from the Bakehouse. Pull up to the Roadshow anytime and ask for a taste or just order one and drink a cool toast to Uncle Meyer and a Rhode Island classic.