A Guide to Good Gelato 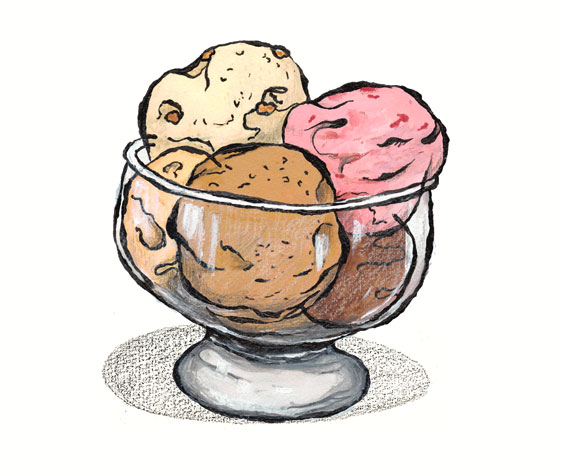 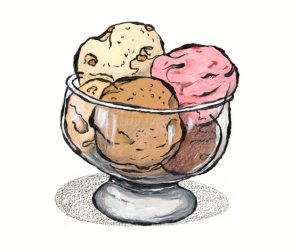 How does gelato does differ from ice cream?
Gelato has a bolder flavor than ice cream. When you put a spoonful of coffee gelato in your mouth, the first thing that strikes you is an intense coffee flavor. If you think of coffee ice cream as a cappuccino with its coffee-flavored milkiness, then think of coffee gelato as espresso; a concentrated and intense flavor experience.

Why are the flavors more intense?
For starters, gelato has less air than ice cream. Conventional ice creams can contain as much as 50 percent of their volume as air. Zingerman’s gelato has only 10 to 20—that means that a little bit of gelato goes a lot farther than a big scoop of ice cream. Gelato also a softer texture than ice cream. Instead of scooping rock hard ice cream, you’ll find our gelato melts almost immediately in your mouth, leaving lots of flavor and a wonderful finish.

How does Zingerman’s Creamery Gelato differ from all other gelato you can get around here?
1) Better Ingredients. High quality whole milk and cream from Guernsey dairy, organic natural Demerara brown sugar and the finest flavorings possible.

2) Italian equipment. We’ve brought over special equipment from Bologna, Italy that’s designed to blend in a minimum of air during the carefully timed freezing process. This special machinery allows us to produce an authentic Italian gelato in Ann Arbor. Many so called gelati in this country are made using ice cream machines and are inadvertently incorporating air equivalents to ice cream and are therefore producing a hybrid of gelato and ice cream.

3) Freshly made. Because we’re working in small batches right here in the Ann Arbor area, Zingerman’s Creamery gelato will always be far fresher than pre-packed product shipped half way across the country. We deliver to the Deli and the Bakeshop from our Manchester base at least three times a week. And with gelato, freshness really does make a difference.

4) Tons of taste tests. We research and test each flavor in blind taste tests to determine which makes the most intensely flavorful recipe.

How can I tell a good gelato when I taste one?
Trust your taste buds. Taste a little of it. If it doesn’t scream out the flavor, it’s not a good gelato. It may be a OK ice cream or something similar, but it’s not good gelato. We joke that when we do a tasting, we give samples to ten people, if three people tell us the flavor is too strong, we double the flavoring and know we’re close. We want big, intense,
exciting flavors.

← Previous: A Taste of Greek Jewish Tradition Next: Like it HOT? →