A Taste of Tunisian Jewish Foods 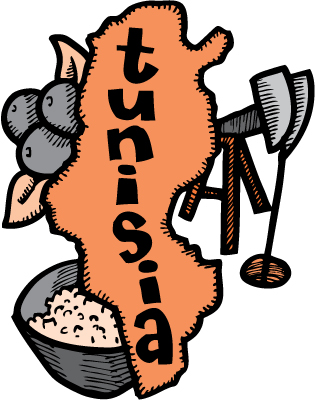 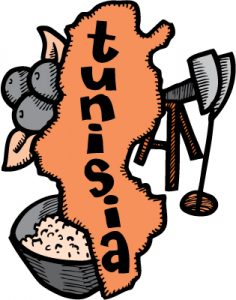 If I’d been writing this piece a little over a year ago, I’d have said that few Americans knew much about Tunisia. While a fair few had probably heard the name, only tiny percentage could have correctly and quickly pointed it out on a map. In the last year though Tunisia has emerged from the political shadows—the “Arab Spring” that started in Tunis a little over a year ago put Tunisia into the headlines. Still, few Americans know much about Tunisia’s history, and even fewer still have had any experience with its food. We at Zingerman’s have been working hard to change that—we love Tunisian food and culture and have been studying it, serving it and selling it, with ever greater frequency over the last few years.

For those who aren’t familiar with it, Tunisia sits pretty much in the center of North Africa, squeezed up against the Mediterranean Sea, between the far larger lands of Libya (to the east) and Algeria (to its west). Having been to visit twice in the last three years, I will say that it far exceeded my expectations on almost every level. Both culturally and culinarily, I found it one of the most intriguing places that I’ve ever been to. It’s is small (population, roughly 10,000.000) with a relatively high standard of living for a Third World country, impressively high levels of education and health care, and a much freer environment for women than I expected to find. It’s a country with a history that dates back to ancient Carthage, one whose citizens include both Hannibal and St Augustine.

The main thing for me though was that I fell in love with the food. While it has elements common to what you might imagine in North Africa (couscous, harissa, preserved lemons, etc.) it’s also has a great deal in common with the food of Sicily (just to the North) and ancient Greece (to the east). Tunisian food is deliciously flavorful, exotic yet accessible, totally foreign, and yet still oddly familiar. Olive oil, olives, a great deal of seafood, spices, vegetables, lamb, and fruit all show up in force in Tunisian cooking. The most prominent flavor in Tunisia though is probably its harissa, the spicy chile pepper tapenade that’s served with and in most everything.

Jews have been living in Tunisia for thousands of years, at least since the destruction of the first temple in Jerusalem and well before there were Christians or Moslems. As they have everywhere, the Tunisian Jews adapted the local foods to Jewish tradition and the laws of kashrut. At its peak before 1948 the Jewish population was over 100,000. After independence in 1956, the majority of Tunisian Jews emigrated, mostly to France and to Israel. But, of course, they carried their cooking traditions with them and this special dinner will be a tribute to that cooking.

Today there are only about 1200 Jews left in Tunisia. Most of Jewish life today—and in its heyday—was centered around the island of Djerba and the Tunis suburb of La Goulette. At one time the latter was home to over a dozen different synagogues. The beautiful jewel box of a synagogue at Djerba remains open to this day and the Grand Synagogue of Tunisia is also still open in central Tunis.

One of the best known of Tunisian Jews is the writer, Albert Memmi. Author of the semi-autobiographical Pillar of Salt (one of my favorite works of fiction) and the non-fiction mid-20th century class, “The Colonizer and the Colonized,” Memmi, like so many Jews left Tunisia for France in 1956. Memmi’s fictional works are insightful, thought provoking, challenging and intellectually engaging.