We the People Opportunity Farm: Nurturing the Soil of the Community 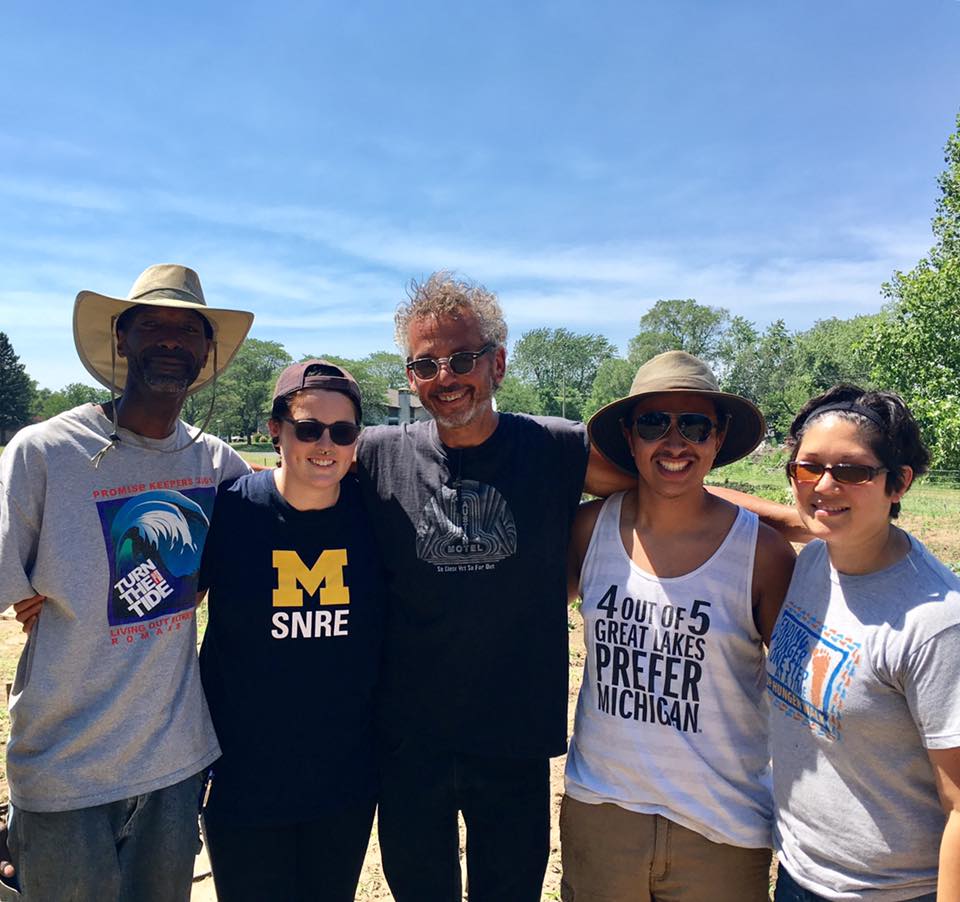 How Melvin Parson’s vision is taking root in Ypsilanti. Melvin Parson with his helpers, including Ari Weinzweig. Photo courtesy of WTPOF.

If you had told Farmer Melvin Parson a few years ago that he would be impacting his community though farming, he might have looked at you like you were turning into a turnip. But here he is in Ypsilanti, with rows and rows of vegetables filling up almost an acre. The farm is We the People Opportunity Farm (formerly known as We the People Opportunity Center), and Melvin started it to help cultivate African American community in Ypsilanti. These vegetables will end up on the menus of local restaurants, including Zingerman’s Roadhouse!

His plot is in the back of Grace Fellowship Church on Harris Road, and I when I go to visit him in the early morning hours, he is hard at work loading up his truck with Swiss chard that he will drive over to the Roadhouse. The Roadhouse uses his chard, collard greens, and Russian kale on our menu. These beautiful collards make our bacon-braised greens so yummy!

The plants are gorgeous, big and leafy. It takes every ounce of self-control not to start plucking purple-veined Russian kale out the WTPOF garden and chomp away like a “wascally wabbit.” Fortunately, Melvin’s story is quite distracting, and I am able to contain myself.

A farmer calls a shovel a shovel.

Melvin started planting seeds in 2014 at Avalon Housing through their Edible Avalon program. A friend named Verna had sadly passed away; however, she had also left him her garden. “I have no idea how I ended up with it, but there I was cleaning out her vegetable bed, and I swear I could feel her spirit. I looked up and thought, I don’t know what I’m doing, but I’m going to do the best I can in honor of you.”

At that time, Melvin got a few transplants for his garden.  He started to get interested as well as concerned with where his food comes from. Out of a desire to start taking care of himself, he went to the farmer’s market to learn more about vegetables.

It was there that he began to really look around. It struck Melvin that the majority of vendors and visitors at the market did not look like him. His concerns are not unfounded. Based on statistics that Zingerman’s CEO Ari Weinzweig has compiled for his article The Plight of African American Farmers, “Today, as we know there are only a handful of African American farmers in the country. The 2007 Census of Agriculture showed about 1300 farmers here in Washtenaw County, of which it says, 16 were African American.” Melvin is breaking fresh ground in the community with his farming.

Melvin started to think about how he could really empower the African American community through farming. In his calm yet assertive manner, Melvin will let you know right away when you meet him that he is a champion of social justice and equality. As he puts it “I’m a firm believer that you either have a seat at the table or your a** is on the menu. It is not only about having a seat at the table, but then to be relevant at the table. And now it is about having a voice at the table.”

According to Melvin, the universe was telling him where to sit, and his table started off as a 3 by 9 foot vegetable bed. By the following year, he became a first year member of Cooperative of Dawn Farm, started by a friend’s daughter named Grace.  Through the Cooperative, Melvin expanded by planting 14 vegetable beds that were 20 feet long. He planted corn, beans squash tomatoes, potatoes, broccoli, collards, beets, carrots, oregano, thyme, onions, peppers, and strawberries – to name a few.

At the Cooperative, Melvin gained a lot of traction and support for his farm. People would come and help, and through them he connected with supportive organizations. After joining one such organization called CAN, Community Action Network, he was able to become more involved with the community by revamping the gardens at their housing development.

If you grow it, they will come.

Melvin admits that while he wants to be more involved with the community, it is hard in turn to get the community involved. But he is personable and persistent. Right now his farm behind the church boasts vegetable rows that are 40-50 feet long, and the plants are near perfect. You can tell that Melvin takes great care of them, but he is not alone. His community, just like his garden, is indeed starting to grow.

On Saturdays, what he calls “Helping Hands” day, he has a group of people come out to assist on the farm. Volunteers will come out to get their hands in the soil and socialize. There are two kids from the neighborhood, 8 and 5 years old, who Melvin calls the “Green Veggie Eaters”. They can’t wait to eat the stuff, so they come running over and say “Farmer Parson, we want to help you!” They are often joined by a local dog, Bella, who Melvin calls “Farm Dog”. Bella’s company is rewarded with water and treats. As Melvin tells me all of this, I am watching the sun glisten off the dew drops on the Swiss chard and make the leaves glow a bright green. I’m breathing in pungent thyme and oregano. He chases an insect with a net across the field, and I can see how farming has truly become instinctual for Melvin. He does indeed have a slice of the universe carved out behind the church, and I could spend the whole day out here watching him tend to it. Melvin takes great care to make sure the plants are protected from insects. Gorgeous Swiss chard with a rainbow of colors.

The fertility of beliefs.

What Melvin is nurturing is something far greater than his farm. He tells me about his vision for the future. Once he has found more land he sees a 5 acre farm, minimum, with hoop houses. He believes that he can get to a point where he can hire local citizens who can in turn contribute to their families and to the community. What he wants more than anything is to create jobs for people.

“I don’t just want to help the individual get better by putting them back in the soil that got them sick to begin with. I want to change the soil, then plant the seeds and watch them grow.”

If anyone has read Ari Weinzweig’s The Power of Beliefs in Business, they may be familiar with his metaphor of a sustainable organization as an ecosystem, with beliefs as roots and soil as organizational culture. Ari talks about Melvin in his book, about how he is an inspiration by “seeding positive beliefs for those who haven’t had that many of late.” Melvin is tending to the soil of his community, and is watching his beliefs about how his vision can impact people locally take root. This is the first day we receive Melvin’s bounty at the Roadhouse!

“I don’t just want to grow food. I want to create a sense of empowerment in the community and educate its members about food sustainability, nutrition, and other essential skills, which promote a healthy outlook upon self, and those about you. Our motto is ‘Grow Food and Get Strong.’” Melvin tastes our bacon-braised greens, made with his very own collards. Photo courtesy of WTPGA.

Melvin and WTPOF now sell produce to Zingerman’s Roadhouse, Main Street Ventures, and Frita Baditos. He will be working with more restaurants around Ann Arbor in the near future. We love his stuff at the Roadhouse. His Russian kale is fantastic in our kale salad, and Melvin’s collards make our bacon-braised greens hearty and delicious.

You really can taste the love that he puts into growing his vegetables, but it isn’t just Melvin’s personal touch. It is the love that comes from the hands that he has brought together to tend the soil, from the people who have joined him at the table.

← Previous: The Plight of African American Farmers Next: The Big Black Pepper Upgrade →