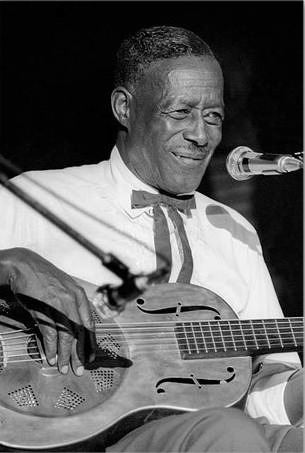 50 years ago, an Ann Arbor event changed the history of music.

Son House playing the guitar at the Ann Arbor Music Festival in 1969.

On August 16th-18th, the 50th Anniversary of the Ann Arbor Blues Festival will bring great music, amazing people, and a celebration of Ann Arbor history.  The event will strike a chord that is local, national, musical, and personal for many. It’s about remembering and reviving, connecting and caring, listening and learning.

In 1969, 13 years before we opened Zingerman’s, a handful of students at the University of Michigan took the initiative to start the very first festival to honor the blues. The impact on the history of music was beyond the scope of a small university town in Michigan. The strum of live blues echoed beyond Ann Arbor to connect the nation with the soul of American music.

Twenty thousand people went out to what is now Fuller Park to hear from the top blues players in the country. The three day lineup included blues greats such as B.B. King, Howlin’ Wolf, and Muddy Waters. Not only was the Ann Arbor Blues Festival the first of many live blues and jazz festivals all over America, it introduced music from black artists to a mostly white community.

The director of the present day Ann Arbor Blues Festival, James Partridge, reminds us that, “It was a really major cultural event, because it introduced black music by black artists to a white audience. It was the ‘by black artists’ part that was so transformative. I’ve spoken to so many people who were in the audience, and their reaction was like, ‘Wow, these guys are playing Rolling Stones songs and Zeppelin tunes.’ They didn’t realize those (bands) had actually (covered) the blues tunes.”

The blues had already established roots in the Southern United States over a hundred years before the festival. It originated from soulful songs sung by slaves in the fields, then also developed after the Civil War from ragtime, folk music, church music, and minstrel shows.  Many of the artists who transformed the blues into the style we hear today were from small, poor Delta towns, their artistic endeavors often limited by education, income, and oppression. Given that the blues offers narrative of the working class struggle, these musicians are actually true historians. They are bards passing on the cultural notes and stories of an era rich in musical talent, namely the 19th and 20th centuries when the reverberant hum of blues and folk music brought inspiration to a transitory nation.

One of these musicians, Son House, played at the Ann Arbor Festival. Ari Weinzweig says: “He was born in 1902, about 800 miles to the south, in a small hamlet just outside of Clarksdale, Mississippi. That’s the same town where, not that many years later, at the crossroads of Highway 61 and Highway 49, Robert Johnson—influenced by Son House who was about 10 years his senior—is said to have sold his soul to the devil. Both went on to become two of the greatest blues musicians of all time!”

Last August, the Roadhouse featured the story of Son House and the other blues legends at a fundraising event to support the revival of the festival. Thanks to local hero James Partridge, the soul of legendary music has been resurrected in Ann Arbor. In 2017, James brought back the Ann Arbor Blues Festival for one day. With the support of the Ann Arbor community, he was able to expand it into a three day festival last year, and into what will be an unforgettable celebration with the 50th anniversary on August 16th-18th.

Just like the James has brought back musicways embedded in American roots, Zingerman’s Roadhouse has strived to connect with you foodways that are steeped in American culture. Traditional Southern BBQ, buttermilk biscuits, collard greens, and more will offer you a taste of what makes our country great! Don’t forget to stop by the Roadhouse after your fill of really good music for really good food!

Buy tickets to the 50th Anniversary of the Ann Arbor Blues Festival!