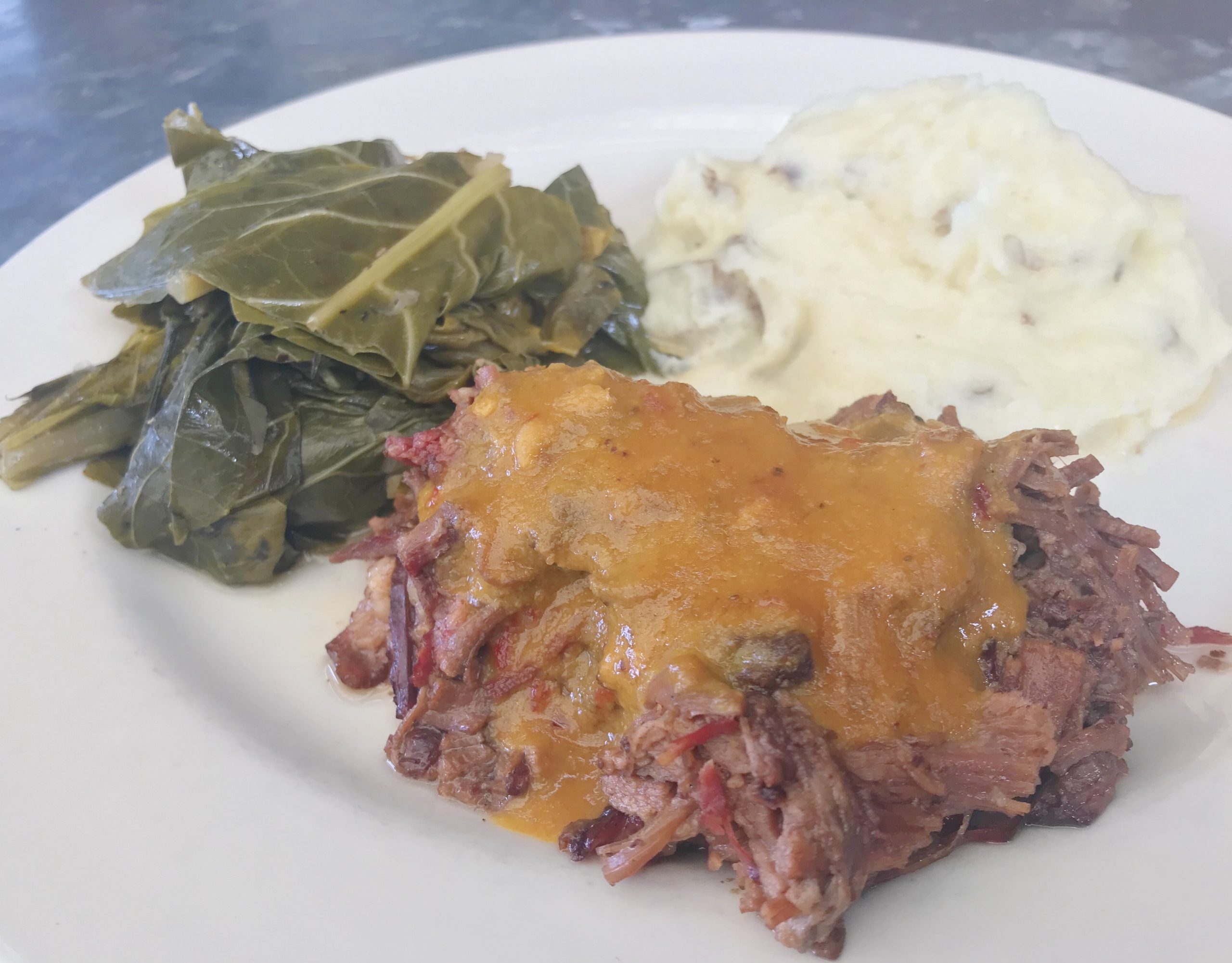 Great on pulled pork, but you can happily eat it on about 18 other things, too!

While mustard BBQ sauce is still not super well known up here in the Midwest, if you were to head down to South Carolina, you’d find out yellow mustard BBQ sauce is about as common as ketchup. One of our former staffers hailed from that part of the world. “I think I was fifteen before I realized barbecue could come in any other color,” she once told me.

Central South Carolina is one of the only—if not the only—places in the country in which mustard-based sauce is the norm. The general theory among culinary historians is that the tradition had its roots in the cooking of German immigrants to South Carolina and their love of good mustard. Germans colonists started arriving in the area in 1674 and by the time of the American revolution, they comprised about 20 percent of the population in the colony/state. Some of the biggest names in South Carolina mustard barbecue to this day—Bessinger, Sweatman, etc.— are of German origin.

History aside, the main thing here is that the mustard sauce is good. Really good. It’s made with a lot of Raye’s stone ground yellow mustard from Maine, Gingras oak-barrel aged cider vinegar from Quebec, a pinch of sugar, and a bunch of spices: ground coriander, celery seed, fresh garlic, chili pequin, and freshly ground Tellicherry black pepper. To be clear on the color, third-generation BBQ man David Bessinger says, “A lot of people from outside of South Carolina think it’s like more of a French’s—you know, French’s Mustard. But it’s not; it’s—it’s more of a darker golden look and that’s why we call it the ‘Golden Secret.’”

All the ways to enjoy South Carolina BBQ sauce!

The “golden secret” is a good name, and you can, in fact, make it the secret to a whole series of tasty treats at your house with this sauce as the secret ingredient. You can order it on pulled pork or ribs. And beyond that, the possibilities are abundant. It’s good on a fried egg sandwich. It’s a great sauce for fish. Or pasta. Spoon a bit atop a pile of the Creamery’s handmade cream cheese like you would pepper jelly—pretty darned good! It’s excellent spooned on top of some of the Roadhouse’s bacon-braised collard greens. Add it into scrambled eggs before you cook them. Put it on a grilled cheese. Spoon it over grilled salmon, a steak, or a burger. Use a little bit as a quick salad dressing. One of my current favorites is to mix a few spoonfuls with a tin of sardines and you’ll have a super tasty salad or appetizer (seriously, it’s terrific!).If you want to learn more about South Carolina mustard BBQ sauce, the Southern Foodways Alliance website is a wonderful resource.

Rian Fertel interviewed the late pitmaster Douglas Oliver for SFA. Asked if the tradition would survive, Oliver’s response seems poignant for the pandemic, and for all of us in the food world: “The future of barbecue here, I think it’ll—it’ll survive. Because like I said, it’s back to good food and everybody loves a little pork every now and then . . . I think it’ll survive. I’m—at least I’m hoping for the time being. I’m pretty sure . . . we’ll survive.”

Try our South Carolina BBQ sauce when you order our BBQ pork!

← Previous: Secret #31: Managing Ourselves Next: Fried Chicken Sandwich at the Roadhouse →