Nachos at the Roadhouse 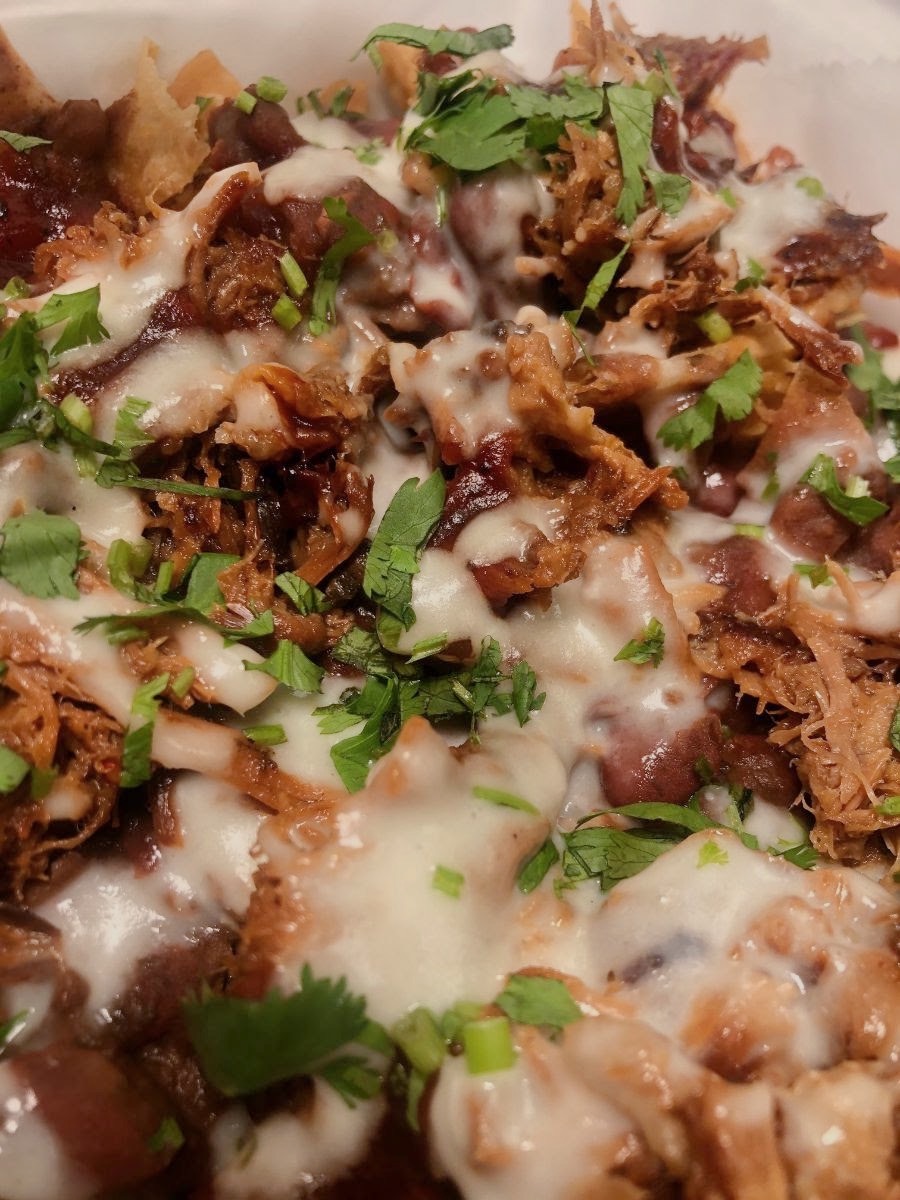 American history all in a tasty platter of nachos.

Two weeks ago I knew next to nothing about nachos. I can’t say I even particularly liked them. They only came to my mind because Roadhouse head chef Bob Bennett did the work to create a really good, high-quality version. I liked it—Tex-Mex seemed a good addition to the Roadhouse specials list. And since there are dozens of versions, they’re very versatile, too.

But there was a lot, lot more I didn’t know. Nachos, now served all over the U.S. in fast food spots, bars, ballparks, and restaurants were originally invented in the Mexican town of Piedras Negras. It happened in 1943. It was two years into the American entry into WWII, and two years before it ended. Franklin Roosevelt was president. The U.S. armed forces, fighting for freedom all over the world were still segregated—segregation didn’t end until 1948, over 80 years after the end of the Civil War. It’s rarely talked about in the U.S., but Mexico was active in the war on the side of the allies.

In 1943, a dozen or so Army wives crossed the border from Eagle Pass, Texas into the town of Piedras Negras. Looking for a late meal, they happened into the Victory Club restaurant. The kitchen was closed, but the maître d’, in a piece of great service work that would fit in really well here at Zingerman’s, decided to put something together for them. His name was Ignacio Anaya. His nickname was “Nacho”—short for Ignacio. He created a platter of fried pieces of tortilla, topped with cheese and chiles. Doing a great job with the in-the-moment, improvisational creativity that’s called for pretty much every day in the food business, he named them after himself—Nacho’s Especiales. Later, Anaya worked at the Moderno restaurant, which is open today, and had his own place, called Nacho’s Restaurant in Piedras Negras. He passed away in 1975.

America falls in love with nachos.

The historical basis for Nacho’s creative solution could well have been the Zapotec totopo or Oaxacan tlayuda. Both are flatbreads that were used to put toppings on. Nachos gradually gained popularity across Texas. In 1960, Anaya’s son tried to get some sort of copyright for his father’s work but was told it was too late. “I talked to a lawyer in San Antonio. He said there’s not much you can do after 17 years. It’s in the public domain.”

In the modern American context, “nachos” actually became famous because of baseball. In 1975, one Frank Liberto of Rico’s Products in Texas, “invented” a melted cheese sauce that could be poured onto tortilla chips from a pump spout and the now ubiquitous ballpark nachos were born.

Nacho typical nacho at the Roadhouse.

A few weeks ago, Bob got to work to make a Roadhouse version of nachos. He ended with something really good. Freshly fried tortilla chips. Housemade pork chorizo. Beans from Camellia in New Orleans. A creamy cheese sauce made with handmade Monterey Jack from Vella Cheese in Sonoma (one of only two places in the country that still make it), and a homemade pico de gallo salsa.

A few weeks later, in the spirit of Ignacio Anaya’s creativity, we shifted to a different version—BBQ nachos, made with chips, pulled pork, Camellia beans, and more of that marvelous Monterey Jack cheese.

Another Ignacio recognized with our nachos.

Ok, one more history note. The Monterey Jack we use at the Roadhouse is generally referred to by the staff using the name of the man—Ig Vella—who made it for so many years. His family came from Sicily to California and his father started the dairy in 1931. His nickname was Ig, but his formal name was the Italian version of the same name as Ignacio Anaya, whose nickname you know already was “Nacho.” The origin of Monterey Jack cheese also goes back to Mexico—it’s descended from the cheese made famous by David Jacks, a Goldrush-era Scotsman, who adapted the Mexican queso blanco (which was, of course, an adaption of Spanish queso blanco) which had been made in the Franciscan missions in California. The cheese originally was known as Monterey Jack’s with an “s.” The “s” got lost, just as the apostrophe in “Nacho’s” was lost as well.