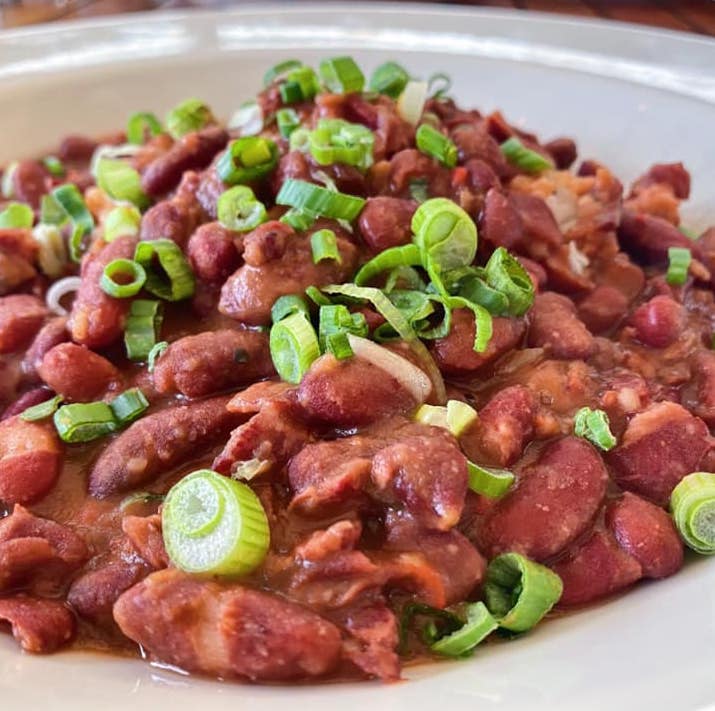 My nomination for a new national dish of the USA

With Mardi Gras this week, the Roadhouse crew are, once again, cooking up some really good red beans and rice. Given the cold temperatures, and most everyone’s inclination to find good comfort food, it makes sense to come by to eat some in the newly reopened dining room or order some for carryout. Longtime head chef Bob Bennett and the Roadhouse crew simmer the red beans with a mess of smoked pork and spices, then serve it with the incredible Carolina Gold rice we get from Anson Mills. The results are super terrific!

One key to the quality of the dish is the Camellia Red Beans that we started bringing in a couple years ago now. I’m not sure what took us so long. Camellia has been working with beans for nearly 150 years now, ever since the Hayward family started trading in the Crescent City in the second half of the 19th century. (They started formally selling their beans under the Camellia label in 1923.) While dried beans generally get limited attention in American kitchens, there are big quality differences from standard, industrially farmed mass market offerings to artisan beans like Camellia’s (or the Rancho Gordo and Zürsun beans we have at the Deli).

Why Camellia Red beans are so good.

Can there be that much difference in a humble bean? The simple answer is “absolutely.” And why not? Beans are just as much an agricultural product as any other produce that comes out of the ground. You wouldn’t even flinch if I told you that one variety of tomato was more flavorful than another. And the same is true for beans. Camellia beans clearly taste better and have a markedly creamier texture. Back in the early 1980s when we opened the Deli, Camellia had already conquered the bean loving city of New Orleans. Even back then, nine out of ten bags of beans bought in the city were Camellia. Every taste test I can find online, and every conversation with culinary experts I know, all say the same thing: Camellia beans are first class—creamier, tastier, more terrific. The family has become famous for buying well above the USDA’s highest level for beans—their minimum is now known amongst Louisiana bean growers as the “Hayward Standard.” In a wonderful interview that I really recommend listening to, nationally-renowned, master seed saver John Coykendall said, “Camellia beans? Mercy! I love those things!”

Red beans and rice were also one of the many specialties of the wonderful Mrs. Leah Chase, longtime owner of Dooky Chase restaurant in New Orleans. Mrs. Chase passed away two years ago at the age of 95. I had the honor of meeting her a few times—she certainly inspired me and many others! Dooky Chase was amazing for many reasons, one of which is that it was the first restaurant in the city serving integrated audiences in an era when segregation was still standard practice. Check out the Southern Foodways Alliance “Oral History” piece and excerpt from Gravy for more on Mrs. Chase.

In the spirit of inspirational leaders like Leah Chase, I had the thought last year that we might consider making Red Beans and Rice into a national dish of the U.S. In the same way that shifting images around humbleness from a desirable but rather ethereal behavioral characteristic to imagining it instead as the ground under our feet, the soil in which our food—real, spiritual and intellectual—grows has helped me, so too putting Red Beans and Rice on par with Hot Dogs and Hamburgers has a lot of power. You can read the whole article, but below is a short bit on why I still believe—more strongly now than then—that it’s a good idea:

Red beans and rice speak to me of coming together, of a grounded holistic blending of cultures, of letting each thing be itself but also of creating a whole that’s far greater than the sum of the individual parts. Instead of fast food and franchises, red beans and rice stands as an example of the excellence of long slow cooking. It encourages a highly personal preparation, one that’s always slightly different depending on the day, and/or on the cook who’s making it. It gets along well with others—you can serve red beans and rice alongside another main course; or it can be the focus of a really fine meal all on its own. Red beans and rice speaks to me of the Native American system for growing beans (and corn and squash) called the “Three Sisters.” It’s a shout out to Africa and the Caribbean and French Canada. It calls up images of Creoles and good cooking, of humility and a love for the beauty that is always to be found—if we look—in the simple things of life.

I look forward to a day when people of all backgrounds can come together in backyards and at kitchen tables with respect and love, learning and laughing together, sharing stories and eating red beans and rice.

← Previous: The 6th Annual Jelly Bean Jump Up is Up & Running Next: Rhode Island Coffee Milk →