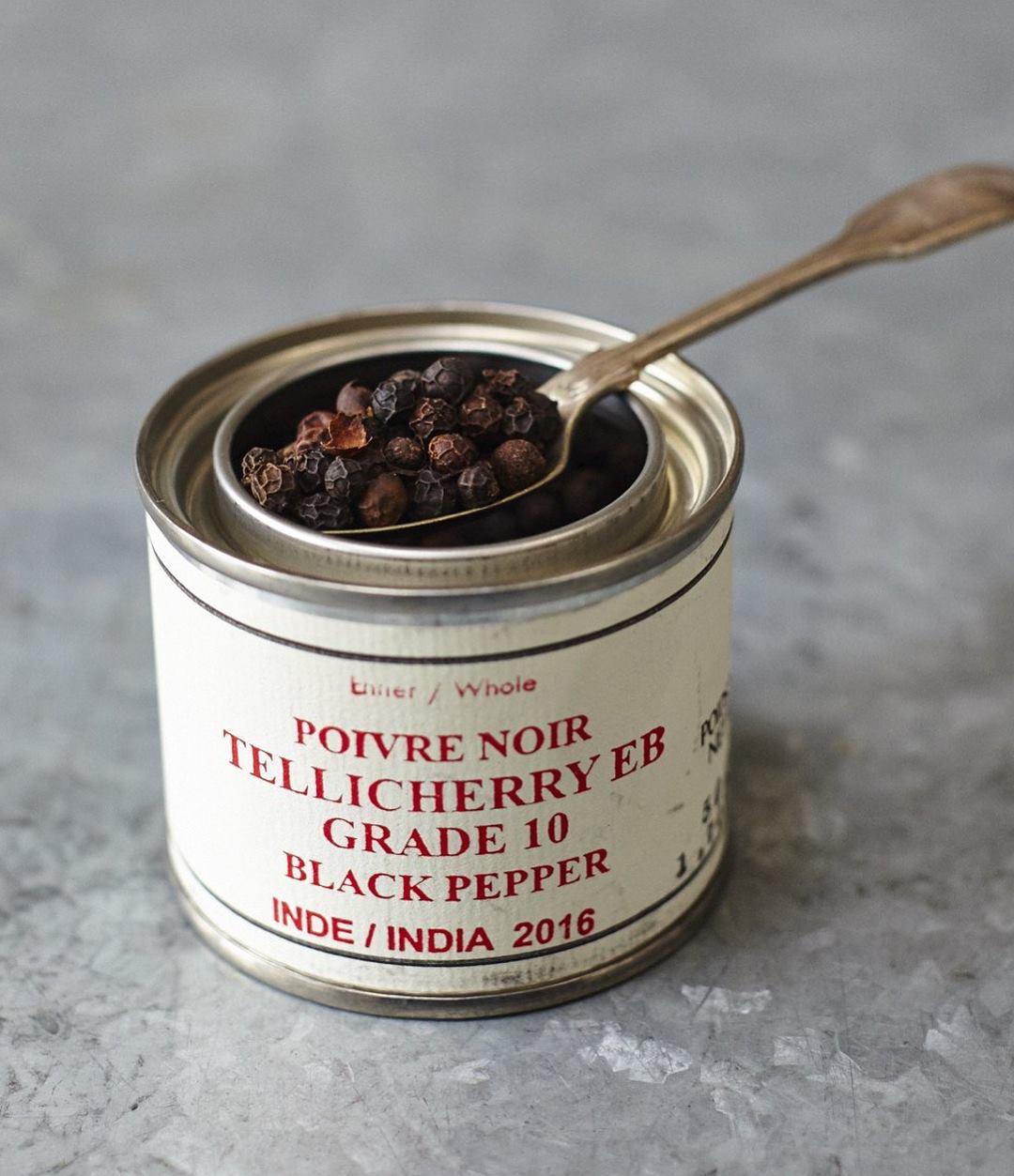 And you can buy some too for your house!

The other evening, pouring water at the Roadhouse, I filled some glasses for a couple of nice customers. They looked familiar, though I certainly don’t know them well. They were waiting for their entrées to come while having a chat. As I was refilling their water, the gentleman turned to me and, pointing to the pepper grinder on the table, asked, “Didn’t you tell me something about this pepper last time we were here?” I smiled. “It’s pretty likely,” I said. “The pepper is great and I’m a BIG fan of black pepper!” From there I proceeded to tell him what was so special: the pepper comes from the region of Kerala, on the southwest coast of India, the place that pepper probably originated. It’s the “secret” source that Columbus was searching for when he set sail (we know now, he went the wrong way). This very special black pepper comes to us through the hard work and commitment of the de Vienne family at Épices de Cru up in Montreal. We’ve been working with them for probably a decade now—we get dozens of superb spices from them, which you can buy on the retail shelves at the Deli or via Mail Order to enhance the quality of cooking at your house as well. You can also enjoy them in so many of the great items we make here. The Spiced Pecans are one of many examples of how better spices helped us to take an already popular and darned delicious product to even higher heights of flavor.

The black pepper we buy from the de Viennes has been a big upgrade for us across the ZCoB. They created a terrific 5-Star Pepper Blend for us a few years back. Great aromatics, incredible flavor. In their lovely retail tins (the Zingerman’s name is on the label since the blend was designed for us), they make a super tasty stocking stuffer. We stock nearly a dozen different varieties of peppercorns that de Viennes source for us. (A gift of six or eight would make any pepper lover smile!) The biggest investment we made in this pepper program was to commit the nearly 2000 pounds of black pepper we use at the Roadhouse every year to Épices de Cru’s Tellicherry pepper. The de Viennes work with their friend Sudheer, a kind, dedicated-to-quality and caring craft spice “trader” from the region. As Sudheer explains: “The small farmers here have one or two hectares. We never buy through traders. Only directly from the farmer.” It has raised the bar on the quality of nearly every core item on the Roadhouse menu—it’s a prominent part of the spicing on the ribs, it’s the featured seasoning in the fried chicken, and it’s a meaningful contributor to the flavor of the burgers, steaks, and all the fish dishes. And as per my conversation with the customers the other evening, it’s on every table in the pepper grinders.

Two weeks ago, after the sort of shipping delays and port problems I’d imagine you’re as tired of hearing about as I am, our 2021 harvest of the Tellicherry black pepper arrived in Ann Arbor. While (properly stored) the peppercorns have a long shelf life, there’s still something special and particularly vibrant about the arrival of the new crop! To celebrate its arrival, the Roadhouse kitchen crew have added some black-pepper based specials this week:

Half an Amish chicken marinated in Alabama white BBQ sauce, rubbed with ground Tellicherry black pepper, and smoked for 3 hours over oak.

Twice-cooked French Fries, tossed right out of the fryer with a bunch of Tellicherry black pepper (one of my favorites!).

When I passed by that same guest’s table a bit later after they had eaten, the gentleman called me over. Shaking his head and smiling, he was holding the pepper grinder in his hand. “That pepper is fantastic,” he said. He kept shaking his head, and added, “Wow. It really is good!!”

If you like pepper, swing by and sample some of these great offerings. Or drop by the Deli or zingermans.com and pick some pepper up for your house. It will, I guarantee, add as much to the quality of your cooking as it does to ours.