Superb Bay of Fundy Salmon at the Roadhouse 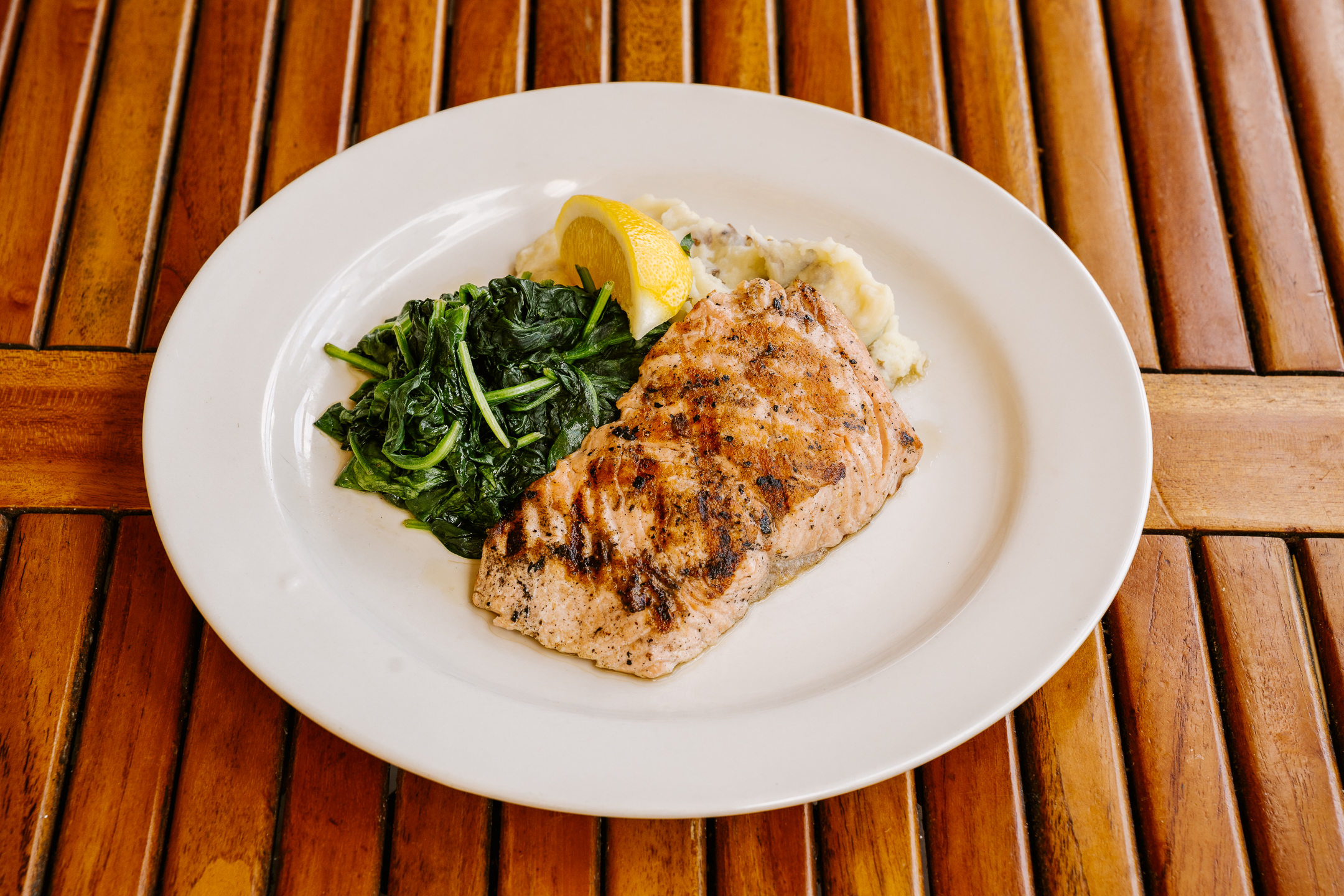 Thanks to the folks at Foley Fish

We’ve been buying fish from the Foley family to broil, grill, and sauté at the Roadhouse every week since we first opened the restaurant’s doors back in September 2003. Then, and now, Foley Fish has been some of the best of the best. As Michael Foley, the grandson of the founder, writes in his history of his family and their now 116-year-old fish business, Swimming Upstream, “We have always had an absolute standard quality, not a relative one. ‘Best available’ or ‘good enough’ have never been good enough.”

The Foley family fish story, as Mike tells it, starts not on a ship, but in a field in the center of Ireland. I’m not sure which of Manchán Magan’s “thirty-two words” would best describe it, but Mike says it was a “small subsistence, family farm in Attykitt, a hamlet of no more than 30 families, in [County] Tipperary.” Mike Foley’s grandfather, Michel Francis Foley, came to the U.S. at the age of 16, all the way back in 1898 to work in his older brother’s Boston fish business. By 1906, Michael Francis was opening his own fish retail market. He envisioned Foley’s being by far the cleanest fish market in Boston. He had his staff hose everything down and clean every hour to maintain standards and developed a way to double wrap the fish in more costly papers (instead of newsprint) to protect customers’ clothes on their way home. Today, the Foley folks are still just as diligent about the quality of their fish, and they’re also at the forefront of promoting sustainability in the seafood world. Foley is as picky about who they sell to as what they sell; I feel honored to be one of their accounts. Literally everything we get from them is excellent. As Frank Foley, Michael’s dad, who I met many years ago on a visit to Boston, said, “Foley’s gimmick is quality. … Quality comes before everything. It’s the reason why profit is always the bottom line of a profit and loss statement—it comes after quality.”

About the Bay of Fundy

The Bay of Fundy itself is an amazing place. Off the east coast of Canada, tucked into the Canadian Maritimes between New Brunswick, Nova Scotia and the east coast of Maine, it was recently named one of the “Seven Wonders of North America.” Its remarkable tidal range of about 50 feet is the highest in the world (the average is just over three!) Better water movement makes for healthier farmed salmon. The region has been inhabited by the Mi’kmaq people for many centuries, long before Europeans arrived, for whom salmon was an essential part of everyday eating. The Bay of Fundy salmon has always been exceptionally delicious. Rob Romeo from Foley’s says, “We regularly do a cook/taste test on salmon from all over and the Bay of Fundy always stands out as the best.” What makes this particular fish so good?

1. Time out of the water—the Bay of Fundy salmon gets to Foley’s within 30 hours, and to the Roadhouse the following day! (Most salmon, often coming from Chile, Norway, or New Zealand, is 48-130 hours old before it even gets to the distributor, and it can still take a couple more days to get to a store or restaurant.)

2. The quality of the feed—this makes an enormous difference between one farmed salmon and another. For Foley’s Bay of Fundy salmon, no chemicals are used, and wild herring is added to boost both flavor and fat content, making for a tenderer texture.

4. A century of good work by the folks at Foley’s, who say, “We have been working with this product and farm for decades, they know our quality standards. … We expect the best and if any of the fish is below our quality checks, we simply send it back.”

Why our salmon is so good.

At the Roadhouse we buy whole, 12- to 15-pound salmon, and butcher them regularly in the back kitchen. Because it’s been on the menu for so long, I have, I confess, taken the Bay of Fundy salmon a bit for granted. But lately, I’ve found myself in the prep kitchen when there happened to be a few extra pieces of cooked salmon leftover. One was simply broiled with nothing more than salt and pepper. I tried it. It was terrific. Clean finish. Complex, lovely. The other piece had been ordered with blackening spice, but, at the last minute, the guest changed their mind so the salmon wasn’t sent out. It too was outstanding—the contrast of the spices with the delicate richness of the fish were a beautiful combo. Swing by the Roadhouse soon and order some of the Bay of Fundy salmon. Great for lunch or dinner, or added to a green salad, it will likely brighten your day in a big way. I know it did mine!