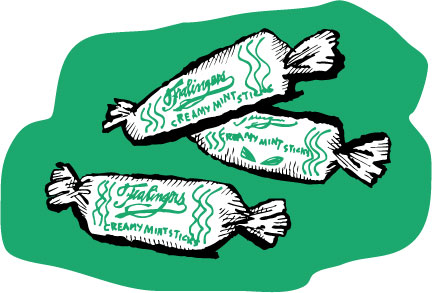 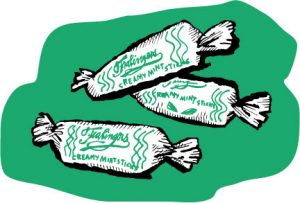 I’m not exaggerating when I tell you that we spent literally spent over a year looking for a mint that would be what we wanted to offer guests after dinner at the Roadhouse. I think I must have tasted five-dozen different mints or after-dinner sweets before we finally found Fralinger’s Creamy Mint Sticks. In fact, I was sharing that same sentiment with a regular Roadhouse dinner customer the other day and I said, “It’s hard to believe, but it took over a year to find these.” He looked at me with a straight face, and said, “That’s not hard to believe at all. That’s what you guys do.” And I realized, he’s right. The search for the small touches that will take any experience from good to great is what we do.

What I know about this search is that it usually takes a really long time – a year isn’t excessive at all for us. Two years is often more like it. It’s nice to think (as I often do) that all this stuff should be worked out before one ever opens for business or starts selling a product. But of course, it just doesn’t work that way in real life. Because in real life, you don’t get to spend a year researching mints before you open a restaurant. When you put together your priority list, things like construction, staff training, wines, steaks and fish suppliers are all likely to come before mints. Then with lots of inquiries and tastings and web searches and samples getting sent, coolers breaking, staff turnover, snow storms, and a thousand other things I’ve already blocked out, it takes a year if you’re lucky.

We used to buy our mints from some very good producers who have good products, but for whatever reason they just didn’t quite hit it for me. They were good on their own, but not so good in the context of what I think needs to come after a meal.

Funny thing is that I could have been on to these all along because the Fralinger’s folks work with Tony Cox, our Dallas-based Mail Order advisor. One day, I was particularly frustrated with this whole mint thing and I emailed to Tony asking if maybe he knew of a mint that we might use. Turns out, not only did he know one, they were one of his clients. My mistake for not asking Tony earlier on.

And lucky we are because these are really good mints. Their formal name is Fralinger’s Creamy Mint Sticks. The Fralinger famly has been in the mint business in Atlantic City, NJ since the 1880’s. Joseph Fralinger, “a former glassblower and fish merchant,” (I’m sure you all know a lot of people who were former glass blowers and fish merchants) started a retail candy shop on the Boardwalk. Today it’s a fifth-generation, family-owned business, and the mints are made to the same recipe as they have been for many decades. They’re still double-wrapped in wax paper marked with the old green and white Fralinger’s logo. They have a long, delicate mintiness that fills the mouth slowly but doesn’t hit you over the head, and a really nice, sort of creamy, almost buttery texture, with a long clean, never cloying, finish.

These may be just little mints, but they are worth trying – a small, subtle but very enjoyable bit of flavor to enjoy when you’ve just finished up a good meal, or just when you want a nice flavor that will linger on your tongue for a while.

Fralinger’s Creamy Mint Sticks are available on the counter at the Roadhouse for 25 cents each. You can also buy a one-pound boxful for $7.99.

← Previous: Housemade Doughnuts Next: Askinosie Chocolates: From the Bar to Beans, to Better Bars →