“. . . they say it’s addictive and I have some people who come every day that I’m open. They come every day. I don’t know how they do it but they are chicken-holics;” Andre Prince Jeffries

Pennsylvania Dutch Creamed Corn, Wisconsin Cheese Curds, Apalachicola Oysters, the Primanti Brothers Sandwich from Pittsburgh, Pimento Cheese Burgers, Carolina Gold Rice, Gullah Sweet Potato Fries, New Mexico Green Chiles, New England Clam Rolls . . . one of the things that we’ve had the most fun doing, serving and eating over the last four years is to bring some of this country’s little culinary “secrets” and bring them to Ann Arbor where everyone gets to eat and enjoy. Of course the list continues to grow—the more we learn, the more we bring back, the more fun we all have eating all this really good American food. I’m very—actually, very, very—psyched about the latest addition to this all-American list—Nashville hot chicken.

A lot of you are going to already be intimately familiar with the Roadhouse fried chicken. I know that because it’s our #1 most popular dish and people comment on it—and eat it—all the time. It’s done in the style of Western Tennessee, learned from the great fried chicken at Gus’, over in the town of Mason, about 45 minutes east of Memphis. Buttermilk, some black pepper, a bit of red pepper fried up with a pretty dark crisp crust, it’s got a touch of heat, lots of flavor, and most everyone loves it. 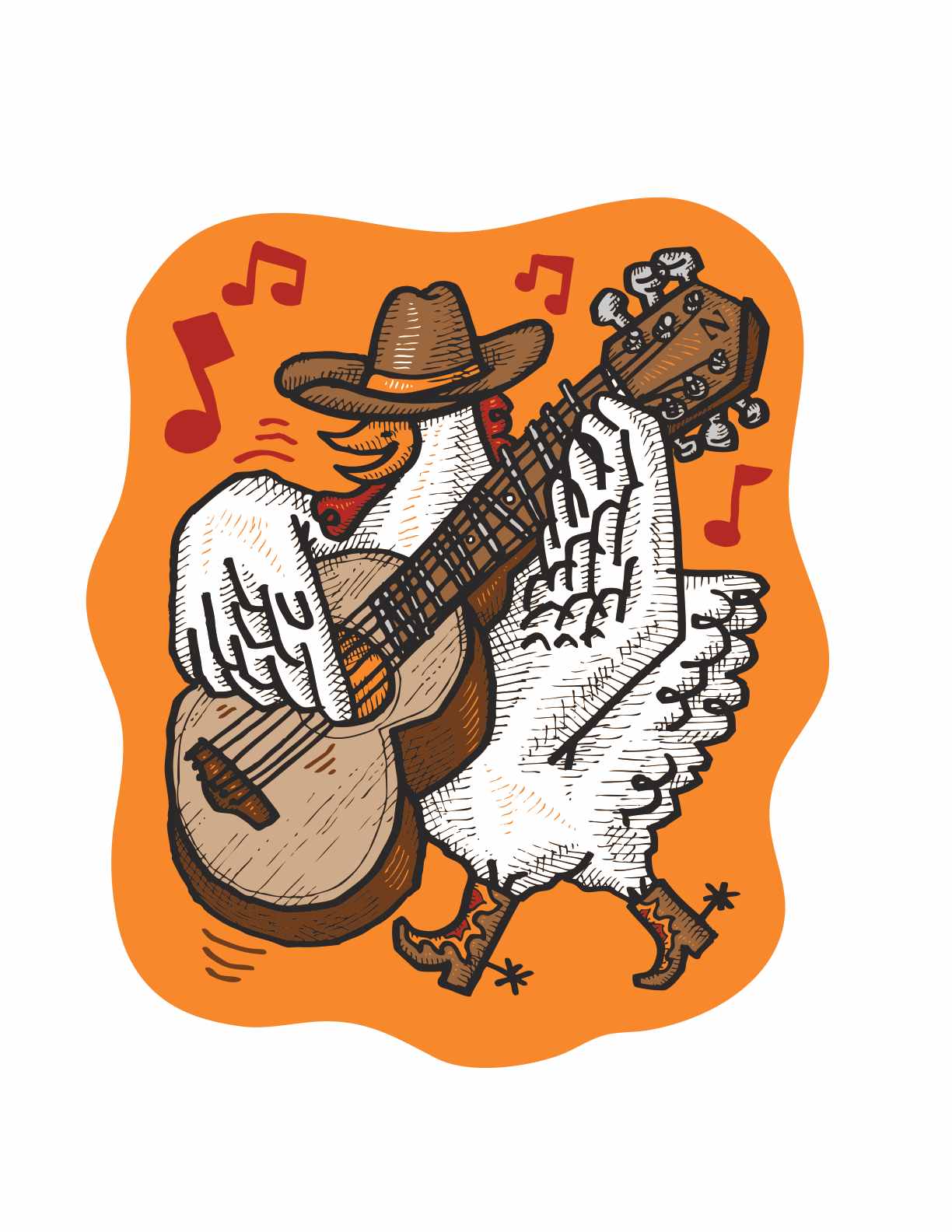 I use that as a reference point because starting this fall, once a week though we head east (figuratively) across Tennessee—Tuesdays at the Roadhouse are now officially Nashville HOT Chicken Tuesdays.

Before I ever actually ate Nashville hot chicken I had the chance to see Joe York’s really great Southern Foodways Alliance-sponsored short film, Hot Chicken. Even if you don’t like spicy food you’ll be intrigued just from watching Joe’s work. It’s hilarious, it’s interesting, it’s informative, it’s only about 15 minutes long and it’s worth watching if you have even the slightest interest in American food or filmmaking. Here at the Roadhouse I’d say that we’re likely a ways away from being able to say that we’ve got something fully in synch with what you’d get in Nashville—they’ve been at for decades, we’ve known it for only a matter of months. But even when you’re eating it up here in Ann Arbor, be careful, ok? As Andre Prince Jeffries, the woman behind the illustrious Prince’s Fried Chicken reports: “ . . . they say it’s addictive and I have some people who come every day that I’m open. They come every day. I don’t know how they do it but they are chicken-holics; they are truly some chicken-holics in Nashville.” I don’t want to become a chicken-holic. Or do I?

Best I can tell hot chicken is a completely unique Nashville eating experience. It’s fried chicken but with a whole mess of secret hot sauce in it (not on it—in it.) There are three or four great hot chicken spots but the most famous of ‘em is Prince’s. I had the pleasure of being down there a year ago last summer to experience if first hand.

Prince’s is run today by Andre Prince Jeffries. Although she’s been at it for many years now, she didn’t start the business, nor is it her recipe; she’s been at for a long time now, and for most people who know it, she is the woman who most represents this very noteworthy Nashville specialty. The story—and of course there are alternate versions to be found—is that hot chicken’s origins date back to one fateful night when Andre’s Uncle (Thornton Prince) left for the evening and failed to make it home one time too many. His girlfriend decided to take revenge the next morning by pouring a whole pile of pepper sauce into her fried chicken batter, cooked it up and then served it to him. As these things are wont to go he actually liked it and Nashville hot chicken was born.

Lots of people have paid homage to it. John T. Edge has written about it in his great “Fried Chicken; An American Classic.’ Jane and Michael Stern covered it too in “Road Food.” There are now, I think four spots in Nashville serving it. I’ve tried two or three. I’m not the world’s expert by any means. All I know is I like it. But hey, I like fried chicken and I like hot food and I like odd, old culinary traditional foods—or at least the ones that taste good—so this stuff is right up our alley. In truth, the best thing I can recommend is to head down to Nashville for a day or so and make the taste trip to the source. But in the mean time, come on in on Tuesdays.

Just so you have some idea of what to expect when you get here,

Nashville hot fried chicken is always served, bone-in, sitting kind of awkwardly if never the less deliciously, atop slices of white bread and pickles. Given our penchant for making good food, here it’s our Bakehouse White (which is a really great, square sided white loaf that actually has tastes great!). Unlike the better-known hot wings from Buffalo, with Nashville hot fried chicken the heat isn’t poured on at the end. It’s actually in the batter—it gets under the skin before it’s cooked. It’s safe to say that if you like fried chicken and you like spicy stuff, it’ll get under yours too when you eat it. Given that we’re in Ann Arbor and not Nashville we haven’t gone for the most nuclear super ballistic extra hot version (though if you want to feel the pain we could probably whip some up for you).

Tracking back to my visit to Nashville, Prince’s is a pretty amazing place and not just for the chicken. Painted windows that approximate the bright colors of the Caribbean, maybe ten tables inside, cash register on a table at the back, butting up against the very small kitchen, where people come to pick up their carryout. From my limited time in Nashville (which people seem to pronounce as “Nash-vull” with the emphasis on the second syllable), the place isn’t on any path you’d happen upon on a typical tourist trip through town—it’s in strip mall next to nowhere else that you’re going to find in any of the travel books. That would explain why few tourists have been at Princes, but, I’ve actually been shocked and surprised by how many people visiting us from Nashville have never even heard of Prince’s, or hot chicken—even in its hometown the stuff is kind of a cult item. Up here in the Great Lakes it’s been pretty much a secret. Up until now at least. I’m forecasting that in a few years we’ll have our own set of chicken-holics coming in very Tuesday to get their fix met.

One interesting footnote (which I guess is almost a “foodnote”) is that fair few people probably have heard of hot chicken but didn’t know why or what they were hearing about. On the album “Electr-O-Pura,” Yo La Tengo has not one, but two, songs with Hot Chicken in the title. Joe York’s got the classic, original second-track-on-the-cd, Hot Chicken as the soundtrack to his film. Now that I’ve had the dish I can say with some degree of groundedness that the song actually reflects the dish, at least to me. I’m not a music writer so forgive my foray into that realm but . . . the song really does have an affinity for the chicken . . . starts with a steady, catchy hook, builds gradually to something approaching but never quite overstepping into all out cacophony. Throughout the beat keeps going, and the music keeps rising and the song gets under your skin in a way that sticks. Think chicken-holism. It all makes sense—the band records in Nashville and they eat a lot of Prince’s hot chicken. Think hot chicken, eat hot chicken, listen to hot chicken.

A couple curious things about the hot chicken story to add. According to Ms. Jeffries, “More women eat it hot [as opposed to medium or mild] than men and I don’t know why that is, but they do.” I have no clue what that means but it’s definitely interesting. “So maybe,” she goes on, “that’s something the scientists can look into–how women can tolerate that heat more so than men.” If I were in grad school at Vanderbilt in American Studies or something like that I think I’d have my dissertation topic right there.

Interestingly back in the early pre civil rights days at her uncle’s place, because it was a black-run restaurant, white folks that wanted to eat the chicken ate in the back. From what I’ve heard, that didn’t deter a fairly good number of whites, who went to Prince’s, took their assigned place and waited patiently for their chicken. The place is small and the wait can be very long—to quote the crew from Yo La Tengo, “It’s certainly not fast food; don’t go there unless you have lots of time.” But people drive. And they wait. The stuff really is that good.

I’ll give the last word here to John Edgerton, one of the South’s great writers on food, culture and politics, and a long time resident of Nashville. “The delicacy, if I may call it that, definitely separates the lions from the lambs, and it’s a division that does not cut along lines of race, class, gender, age, or previous condition of servitude. You either eat it and weep, or you’re a wimp like me and order it as mild as they can make it—a normal piece of chicken, deep-fat fried to crispy perfection.”