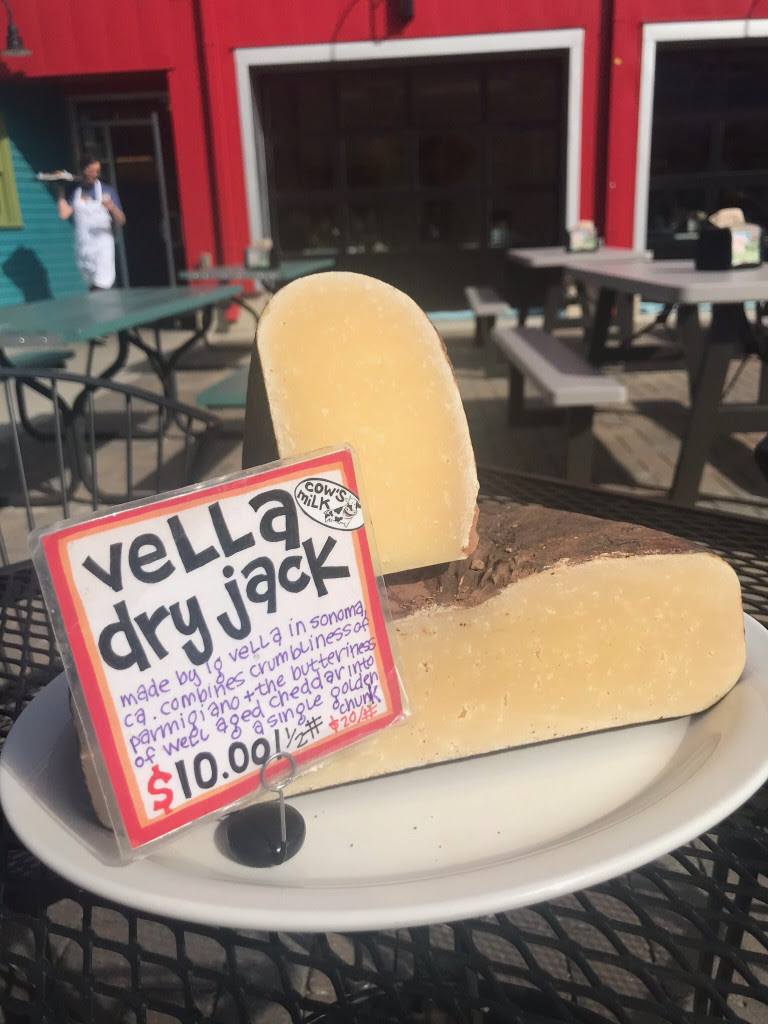 Although probably fewer than five percent of American consumers have ever heard of it, dry Jack is probably the greatest of all American cheeses. Historically, texturally, and flavorfully, it’s a one-of-a-kind American original and made for decades by one of my favorite people in the cheese world. Sadly, Ig Vella passed away in June of 2011. I miss him still. Fortunately, I can still regularly eat and appreciate one of the cheeses that helped earn him an American Cheese Lifetime Achievement Award. It’s an exceptional offering.

The general story of dry jack cheese is sort of a 20th century North American remake of the legend of Roquefort. You know, the story of the young shepherd boy who leaves his cheese and his bread behind in a cave? He returns weeks later and finds that the ugly-looking blue mold that had grown on the cheese was actually a windfall when it came to flavor, and Roquefort was “born.” In the modern dry jack version of the story, the part of the shepherd/hero is played by a San Francisco grocer names DeBernardi. Finding his supply of aged grating cheese from Italy cut off by World War I and desperate to satisfy his customers, he stumbles upon an abandoned pallet full of Monterey Jack. As in the story of the shepherd, this cheese had been set aside and forgotten about in the shop’s cellar. And, amazingly, what had started out mild and soft had turned into an incredibly delicious, firm-textured and full-flavored aged cheese.

The Vella family started making Monterey Jack, Dry Jack and many other cheeses in the town of Sonoma in 1931, when Ig’s father, an immigrant from the central Sicilian town of Gela, and a friend named Celso Viviani, started their own creamery. The two immigrants worked together for 20 years up until 1951, when they went their separate ways. Celso chose to set up Sonoma Cheese, which is operated today by his grandson, David. And Tom Vella started Vella Cheese in the old brewery that still stands just off the plaza in the center of the town of Sonoma.

Dry Jack is one of the most historically important cheeses we have—when other artisans gave up and folded their hand, the Vellas stayed the course, through the low point of the ’70s days when craft cheese all but disappeared in the U.S. Happily, it was still there for us to appreciate in the ’80s and ’90s when American cheese began its big comeback. There’s really nothing like it anywhere in the world. Dry Jack is a delicious study in contrast. Full-flavored without being strong; firm-textured, yet surprisingly soft on the palate; great for eating as is but also for grating onto salads, pastas or soups. It brings a bit of aged Gouda, Parmigiano Reggiano and American cheddar all together in one terrific cheese. Eat it on its own, toss cubes of it onto your salad, grate it onto pasta, or enjoy it after dinner with some of those terrific dried pears we have at the Cream Top Shop.

Vella’s young Monterey Jack—one of the only authentic, traditional fresh Jack cheeses still being made in this country, is also amazing. Creamy, milky, mild and totally delicious, you can try it on the macaroni and cheese with smoked chicken, fresh corn and New Mexico green chiles at the Roadhouse. Really good!

← Previous: Grits n’ Bits Waffles: All the Deliciousness in One Place Next: Really Good American Wine at the Roadhouse →