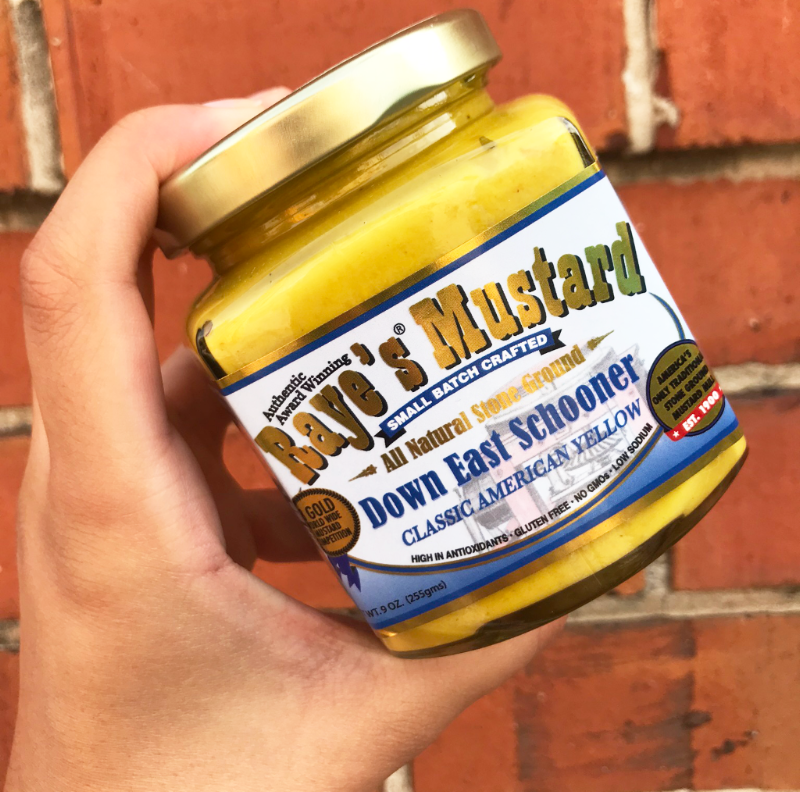 The primary color of mustard makes its way to Ann Arbor

Given all of the really great goings on in the food world these days, something as seemingly simple as yellow mustard would be easy to miss. But, you won’t be shocked, I suppose, to hear that here at Zingerman’s we’ve tracked down a yellow mustard that’s made by some of the most mustard-passionate people in the country.

The folks at Raye’s in the tiny town of Eastport, Maine, are almost as far north as one could go without actually crossing the border into Canada (the town is actually the easternmost city in the U.S.). Raye’s is the only traditional stone mustard mill left in the U.S., and as Karen Raye says, “It’s probably the only one left in the Western Hemisphere.” The mill was built 109 years ago, at the turn of the century, by her husband’s great-great uncle, J.W. “If he were here today, J.W. would see the mill pretty much as it was working when he built it. We’re still using the original stones” she said, referring to the eight, 2000-pound, quartz wheels that were quarried, carved, and carted over from France in 1900.

The mustard-making process at Raye’s starts with whole mustard seed. By contrast, most other commercial products these days start with already processed mustard powder. Raye’s work is all based on cold stone milling of that mustard seed. As the seed passes through each of the four sets of stones the resulting paste gets ever creamier, which explains why the finished product you and I get out of the Raye’s jar is so smooth. To protect the cold-milled seed, the Raye’s use cold water from their 400-foot well—same idea as mixing the bread dough out at the Bakehouse. Cooler water takes longer but protects the flavor of the seed. (Most all commercial producers today use heat in the production process to speed production and increase yields.) The mustard is then allowed to age for a few weeks before it gets packed up.

You really can taste the difference—just try a spoonful of it next to some standard supermarket offering. Try it on a sandwich at the Deli, or with an order of corn dogs (frequently acknowledged by Roadhouse regulars as one of the hidden culinary gems on the menu). Commercial yellow mustard, to me, consistently tastes remarkably thin and watery compared to the Raye’s, which has a mellow but mouth-filling flavor that I want to describe as “exceptionally yellow.” That is a rather silly thing to say, but it’s what comes to mind. “Yellow mustard” is so much a part of American eating that it’s almost a primary flavor in its own right. And if that’s the case, then the Raye’s product is the paradigm.

Find out what our favorite menu items are that we serve with Raye’s Mustard!