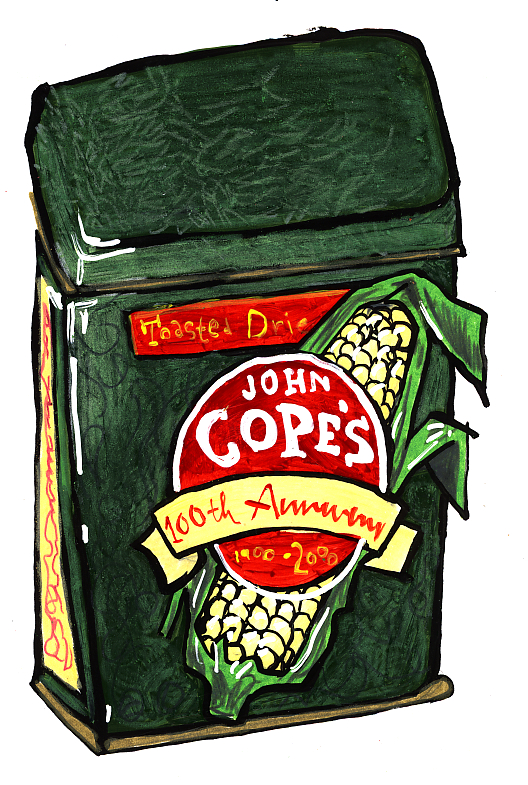 In the food world, dried corn has remained a closely closeted, practically clandestine culinary secret. No longer. We’re going to out it – I’m reluctantly going to formally announce that Pennsylvania Dutch dried corn is the “next big thing.”

Jim Grosh, business manager at the Roadhouse, tasted the first batch of creamed corn we made from it, smiled big and said, “Yep, that’s the stuff. I grew up on it.”  The late RW Apple who has written extensively on both food and politics for the New York Times for many years reported that, “I’ve been eating Cope’s corn since my childhood.” Writing about the Thanksgiving meal, he said, “More than anything except the turkey, it is a link to our forefathers, something we all seem to crave.”

The tradition of drying corn is a natural one. Corn is in season a few weeks of the year. The rest of the time it has to be preserved, and back then, drying was the most common way of preserving. The key is to get the corn into production right after picking before its sugars start turning to starches. The drying then caramelizes the natural sugars in the corn, giving it this subtle, toasty, super sweet flavor.

To this day, most all of the dried corn made is consumed within an hour or two of what should be called Dried Corn World Headquarters in Rheems, PA. That’s where the John Cope’s is. When it comes to dried corn today, Cope’s is it-they’re the only ones left making it! Martin Cope did his first batch in 1900 and the company is basically still doing it now as they were then. They buy corn only during the height of the season when the sugars are at their highest.

When we cook it up into Pennsylvania Dutch creamed corn, it’s got an amazing brightness of flavor that makes me want to eat this stuff even when corn is in season in the summer! In his New York Times piece, RW Apple quoted Thomas Cope as saying, “Isn’t it something? Such a simple process, but it gives you the taste of corn roasted over an open fire, not just in the summer but all year long.”

Creamed corn is only one of a few million things I think you can make with this stuff. The great thing about creamed corn made from Pennsylvania Dutch dried corn is that it was designed to be made in the middle of the winter and that it tastes terrific regardless of when you eat it. Essentially anything you make with fresh corn is going to be good with dried corn. We make a great corn chowder from it at the Roadhouse. So for the nine or ten months out of the year when there’s no good local corn to be had, this is the old-fashioned, great tasting, American way to go. Stop by the Roadhouse for a taste, or buy a box at the Deli, Mail Order or Roadhouse and cook some up for yourself.